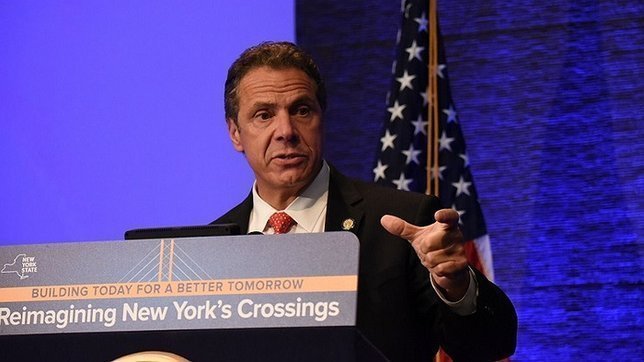 Albany, NY - January 17, 2017 - Governor Andrew M. Cuomo and Attorney General Eric T. Schneiderman today filed a complaint which seeks to compel the U.S. Environmental Protection Agency to fulfill its mandatory duty under the federal Clean Air Act to curb ground-level ozone (or "smog") pollution that blows into New York from upwind states.
At least one in three New Yorkers breathe air with unhealthy levels of smog pollution, with some analyses placing it as high as two in three New Yorkers (approximately 12.7 million people). EPA studies demonstrate that pollution from upwind states contributes substantially to New York's dangerous smog problem. Specifically, New York is asking that EPA require sources in five states—Illinois, Michigan, Pennsylvania, Virginia, and West Virginia—do their fair share to address pollution impacting New York.
"New York is once again taking aggressive actions to not only push forward our nation leading energy goals, but also protect our state from harmful air pollution." Governor Cuomo said. "With this action, we are sending yet another clear message to the federal government that when our environment is threatened, New York will step up at every turn to protect our most vital resources for future generations."
"Millions of New Yorkers breathe unhealthy air due to smog pollution, much of which blows into New York from upwind states," said Attorney General Schneiderman. "Yet the Trump EPA continues to ignore its responsibilities under the Clean Air Act to reduce interstate smog pollution.  Since the Trump EPA refuses to follow the law, we're suing to protect the health of New Yorkers."
New York has some of the most stringent air quality regulations in the country, and pollutants that cause smog - such as nitrogen oxides and volatile organic compounds - are well controlled. In fact, New York has among the lowest emissions of NOx and VOCs in the country. Despite New York's best efforts to combat smog pollution, the New York City metropolitan area has struggled for years to meet the federal health standard for smog and - according to a 2017 America Lung Association report - it is the ninth most smog-polluted area in the nation.
EPA has found a number of dangerous health impacts associated with elevated levels of smog, including lung tissue damage, and aggravation of existing conditions, such as asthma, bronchitis, heart disease, and emphysema. Exposure to smog is also linked to premature death. Some populations, including children, the elderly, and those with existing lung diseases, such as asthma, are at especially heightened risk from smog pollution.
"To safeguard our natural resources and protect public health, New York has some of the nation's most stringent air quality standards," said Department of Environmental Conservation Commissioner Basil Seggos. "But EPA's failure act responsibly and require upwind states to limit their pollution leaves our state with little recourse but to further reduce pollution from New York sources. For the sake of our community's health, we're calling on EPA to act."
The "Good Neighbor" provision of the federal Clean Air Act requires EPA to adopt plans to reduce interstate smog pollution when the actions of upwind states are not sufficient to ensure that federal smog health standards can be met and sustained in downwind states like New York. EPA's obligation under the act to adopt such plans, known as "Federal Implementation Plans" or "FIPs," reflects its unique position and authority as a federal agency, to ensure that the individual efforts of multiple upwind states will be sufficient, in aggregate, to solve regional air pollution problems like smog.
On August 12, 2015, EPA determined that the planned actions of 24 states, including several states upwind of New York (Illinois, Michigan, Pennsylvania, Virginia, and West Virginia), would not reduce pollution emissions to ensure that federal smog health standards could be met and sustained in New York. This determination triggered a two-year deadline under the Clean Air Act that ended August 12, 2017, for EPA to adopt FIPs for these upwind states. Despite this statutory deadline, EPA has to date failed to adopt these legally mandated plans.
Relatedly, a federal court recently held that the EPA had not fulfilled its obligation to issue a FIP for Kentucky's Good Neighbor provision obligations under the 2008 ozone standard by the statutory deadline and, in May 2017, denied an EPA request for an additional 20-month delay in issuing the FIP.
The Clean Air Act requires states to provide notice to EPA of their intention to sue under the act. Accordingly, Attorney General Schneiderman mailed a notice of intent on October 26, 2017, informing EPA Administrator Scott Pruitt that unless EPA fulfilled its mandatory duty under the act's Good Neighbor provisions to protect New Yorkers from transported smog pollution within 60 days, the Attorney General would sue to compel Administrator Pruitt to fulfill that duty. This statutory 60-day notice period has now expired without action by EPA to fulfill the mandatory duties outlined in the Good Neighbor Provision. As a result, Attorney General Schneiderman, in conjunction with CT's Attorney General, filed a complaint today in furtherance of this action, which seeks to compel EPA to fulfill its nondiscretionary duty to issue a FIP for each upwind state that fully addresses its Good Neighbor obligations by a date certain.
Smog is not emitted directly into the air, but forms when other pollutants, such as nitrogen oxides and volatile organic compounds, react in the presence of sunlight.  NOx and VOCs can travel hundreds of miles after they are emitted. The EPA has recognized for decades the regional nature of the smog, and that pollution from power plants, motor vehicles, factories, refineries, and other emission sources located in multiple upwind states contributes to downwind states' smog problems.  Because of this, the EPA has long known that downwind states cannot solve their smog problems on their own, and that reducing smog in downwind states such as New York requires upwind states to reduce their "interstate transport" of smog pollution.