AccuWeather reports as millions of people take to the roads and skies during the week of Thanksgiving, a storm will impact travel in the West, while mild weather continues in much of the East. 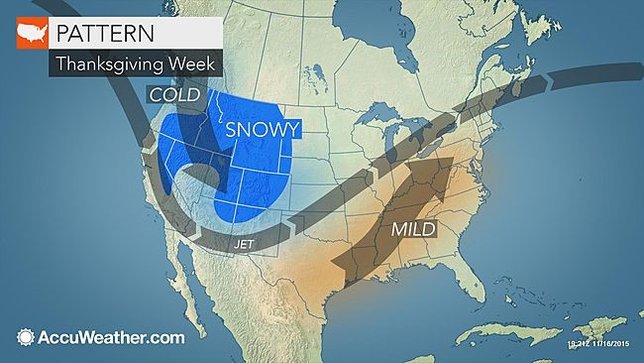 AccuWeather Global Weather Center - November 17, 2015 - AccuWeather reports as millions of people take to the roads and skies during the week of Thanksgiving, a storm will impact travel in the West, while mild weather continues in much of the East.

According to the American Automobile Association (AAA), gasoline prices averaging around $2 per gallon could drive an increase in highway travelers this Thanksgiving.

The majority of people traveling over the eastern two-thirds of the nation should not have snow and ice to contend with from Monday through Wednesday, next week.

As is sometimes the case during mild weather in November, patchy fog could slow down some morning travelers from the interior South to New England. However, the weather in the East is likely to feature the most favorable travel conditions with sunshine.

Spotty showers expected over part of the Florida Peninsula are not likely to impact travel.

Stiff southerly winds could accompany the mild air over the Central states.

The southerly flow may also add enough moisture to the air to cause areas of low clouds and spotty rain or drizzle from parts of Texas to Michigan, Wisconsin and Minnesota.

Thunderstorms may begin to develop in parts of Texas and Oklahoma.

The combination of wind, low clouds and spotty rain could cause minor airline delays on a local basis.

The vast majority of adverse weather conditions for travelers will be in the western third of the nation.

According to AccuWeather Senior Meteorologist Brett Anderson, "We expect another large storm to roll from the Pacific and expand toward the central Rockies during the week of Thanksgiving."

The storm is likely to spread drenching rain along part of the Pacific coast and heavy snow in portions of the Cascades, Sierra Nevada and the Rockies, spanning Monday to Wednesday.

Travel along parts of interstates 25, 70, 80 and 90 in the higher elevations of the West are likely to be slippery.

Cities that could be directly affected by the storm next week include Seattle, San Francisco, Salt Lake City and Denver.

"The exact strength and timing of the storm is still uncertain," Anderson added.

If the storm takes a southerly route, then heavy rain and mountain snow may also sweep into Southern California, Arizona and New Mexico. Such a storm track could have significant impact on travel in Los Angeles, Las Vegas and Phoenix.

A southern storm track may also allow the weather to clear quickly in the Northwest.

Cold air and gusty winds will again spill southward over the West next week regardless of the storm track.

AccuWeather will continue to provide updates on the Thanksgiving travel conditions.