Governor Cuomo announced the I LOVE NEW YORK fall foliage report is available for the 2015 season. 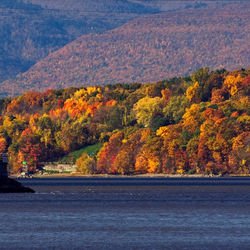 Albany, NY - September 21, 2015 - Governor Cuomo announced the I LOVE NEW YORK fall foliage report is available for the 2015 season. The foliage report charts color conditions across the State and will be updated every Wednesday through the end of autumn. In addition, travelers are encouraged to share their unfiltered New York State fall photos for the 2015 Foliage Photog of the Week social media campaign, by using the hashtag #NYLovesFall. The campaign will run through November to promote autumn tourism in New York.

“New York’s already unparalleled scenic destinations become even more beautiful as the leaves change colors – attracting visitors and boosting economic activity in communities across the state,” said Governor Cuomo. “When people see what New York has to offer, they’ll fall in love, so this fall I encourage everyone to keep an eye on the foliage report and take a trip to see what they’ve been missing.”

The fall foliage season is big business in New York and one of the most popular travel times of the year. In 2014 alone, it is estimated that travel spending in New York from September through November had a total economic impact of more than $26 billion, with $16.23 billion in direct spending.

The 2015 fall foliage report is available at www.ILOVENY.com/fall.

To promote extraordinary autumn sites found across New York State, I LOVE NEW YORK will host a social media campaign featuring photos taken by Twitter, Instagram and Facebook users in the state called Foliage Photog of the Week. The campaign will run through the end of the foliage season in early November, and one spectacular New York State fall foliage unfiltered photo posted using #NYLovesFall will be chosen each week and shared across I LOVE NEW YORK social media. Each photo must be tagged with the name of the location of where the photo was taken. Along with bragging rights and elevated status, each Foliage Photog of the Week will receive an I Love NY prize package, including overnight hotel accommodations.

To learn how to become a volunteer Leaf Peeper, e-mail your name, address and phone number to foliage@esd.ny.gov. Fall foliage reports are also available by dialing, toll-free, 800-CALL-NYS (800-225-5697) from anywhere in the U.S., its territories and Canada.