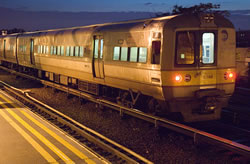 The Long Island Rail Road operates seven days per week with service and branches from Manhattan to Montauk. Most of the Long Island railroad stations are open during normal business hours. Many of the stations are equipped with automated ticket machines so you can purchase your tickets before boarding the train. If you are running late, tickets can be purchased from train conductors.

The LIRR's history stretches back to 1832 and the Brooklyn and Jamaica Railroad, which built a ten mile (16 km) stretch of track between Brooklyn and Jamaica. The Long Island Rail Road itself was founded in 1834, leasing the track laid down by the B&J and building its own.

The original plan was not as a local service to serve Long Island, but rather a quicker route from Boston to New York. Trains would run from Boston to Stonington, Connecticut, where the passengers would cross by ferry to Long Island. They would then ride on the LIRR to Fulton Street in Brooklyn, and finally cross by ferry to New York. The reason for this rather complicated plan was the impossibility, at the time, of building a railroad through southern Connecticut.

The LIRR thus built its original tracks running straight down the middle of the island, which was largely uninhabited at the time, rather than serving the existing Long Island communities. This route was chosen as the most direct way to travel to New York.

Schedule for the first day of revenue operation, July 29, 1844. The Island-long route was completed in 1844 and at first was highly successful. However, in 1849 the New York and New Haven Railroad opened through the "impassable" country of southern Connecticut, and a direct overland route from New York to Boston now existed. The LIRR's reason for existence was gone.

The only remaining business was to serve Long Island itself, something the railroad was not built to do. Efforts were made to build branches to the small Long Island communities. In 1850 only one such branch existed, but more were built, as well as a number of other railroad companies' branches.

In 1860, the City of Brooklyn banned the use of steam engines in populated areas. The Long Island Rail Road reduced service to Brooklyn, eliminating the track between the current Flatbush Avenue terminal and the then Fulton Street terminal. Service between Jamaica Station and Flatbush Avenue was by horse drawn cars. The Long Island Rail Road built the route from Jamaica Station via Woodside Station to the Long Island City terminal where ferry connections to Manhattan could be made. This route was entirely within Queens County, and avoided the Brooklyn law. Since that time, the routes to Brooklyn have always been considered secondary.

The combination of the loss of the New York to Boston traffic and all the competing railroads made for harsh financial times for both the LIRR and the newer roads. In 1876, the LIRR was bought out by the owner of one of the competing roads, but the Long Island Rail Road name was used for the merged company. Even consolidation could not prevent another receivership in 1879, however.

The road was purchased by Austin Corbin in 1880 and further building took place. By 1900, the LIRR had reached the limits of its expansion. During this period the road was profitable.

In 1901 the Pennsylvania Railroad acquired the Long Island Rail Road and went about an extensive program of improvements. The PRR had long desired a terminal on Manhattan Island itself, instead of in Jersey City. The PRR built a grand station, Pennsylvania Station, with tracks oriented approximately east-west, and dug two sets of tunnels, one under the Hudson River to connect the new station with the Pennsylvania Railroad network, and another set under the East River to connect with the Long Island Rail Road.

In April 1905, Ralph Peters was elected president of the railroad.

Due to a fatal accident caused by decreased visibility from smoke and steam in the tunnels near Grand Central Terminal, New York City passed laws in 1910 forbidding the operation of steam-powered trains within city limits. Thus, an ambitious program of electrification was initiated, culminating in a large portion of the LIRR's network being electrified via a third rail direct current system. This electrification is still in use today.

After the Second World War, the LIRR became an increasing financial burden on the Pennsylvania Railroad, and eventually became bankrupt. It was purchased by the State of New York and is now a subsidiary of the New York Metropolitan Transportation Authority (MTA).