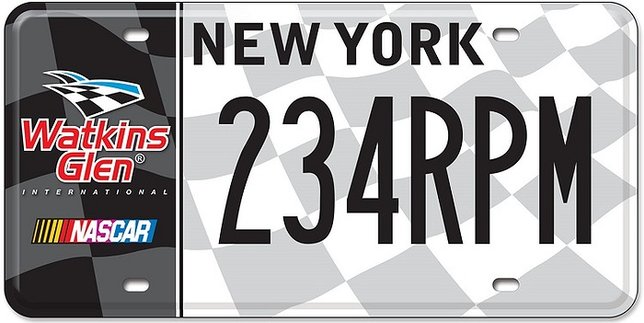 Albany, NY - August 1, 2016 - Governor Andrew M. Cuomo today unveiled a new Watkins Glen International license plate, available for order beginning Thursday, August 4. The plate is the newest addition to DMV’s NASCAR custom plate series and features the WGI and NASCAR logos with a checkered flag background. The announcement coincides with the 2016 Cheez-It® 355 at the Glen – New York State’s only NASCAR race – and one of the highlights of Upstate tourism every summer. The Glen supports Governor Cuomo’s commitment to tourism, which recently reached a new record-high economic impact in New York State of $102 billion – an increase of 25 percent since 2010.

“The new Watkins Glen license plate celebrates New York’s strong partnership with this award-winning NASCAR racetrack,” Governor Cuomo said. “New York is proud to host this world-class event at the Glen, which attracts motorsport enthusiasts and drives tourism in the Southern Tier. I encourage racing fans to stop by the DMV exhibit on the Midway during this weekend’s events and take advantage of the services they have to offer.”

Personnel from DMV will also be on hand to personally sell the newly-issued plate to NASCAR fans for the first time. DMV staff will help visitors order additional custom plates, renew their registrations, assist with address changes, schedule road and vision tests, and complete web transactions.

DMV Executive Deputy Commissioner Terri Egan said, “DMV is excited to once again partner with Watkins Glen and make this plate available to racing fans all over the state who make the venue a destination each year. The Glen is a perfect venue for DMV staff to interact with its customers and promote tourism at the same time. I thank Governor Cuomo for providing DMV with this opportunity to connect with customers statewide, and I encourage New Yorkers to order this plate to show their support for the Glen.”

In 2015, Lieutenant Governor Kathy Hochul and DMV partnered at WGI’s Cheez-It ® 355 to launch a redesigned customer NASCAR license plate series. The redesigned custom NASCAR license plate series, which can be found and ordered here, reflects the changing the number of drivers and their racing colors, and has made Danica Patrick’s updated custom plate available for order August 4. There are now 11 NASCAR designs for fans of Dale Earnhardt Jr., Jeff Gordon, Danica Patrick, Tony Stewart, Jimmie Johnson, Kasey Kahne, Kevin Harvick, Denny Hamlin, as well as the Dale Earnhardt NASCAR Hall of Fame, NASCAR fan, and Richard Petty Historical plates. All NASCAR plates are available in both passenger and commercial classes.

In addition to the Watkins Glen plate and the updated Danica Patrick plate, DMV will make several other redesigned license plates available for order, including:

The Southern Tier Regional Economic Development Council selected Watkins Glen International as a priority project in Round IV, as it aligns with "Southern Tier Soaring," the region's comprehensive blueprint to generate robust economic growth and community development. A $2.25 million state grant supported paving and track upgrades necessary for addressing critical safety deficiencies prior to the start of the 2016 season.

About Watkins Glen International
Watkins Glen International is the premier road racing facility in North America, voted “Best NASCAR Track” by readers of USA Today, and located within five hours (or 300 miles) of 25 percent of the U.S. population. Tickets for the 2015 season may be purchased by calling 866.461.RACE and online. Keep up with The Glen on Facebook and Twitter. Download The Glen’s free mobile app from the App Store or Google Play.