The Giants came out on top of a controversial game to cap off a mixed weekend for New York sports fans. 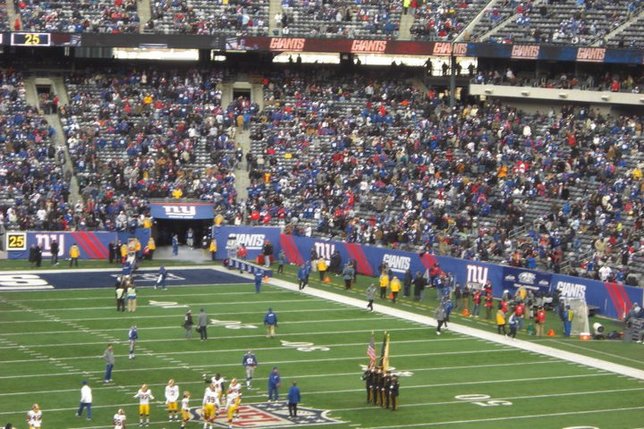 Giants Win on Controversial Ending
The Giants came into Sunday’s prime time game against the Redskins in desperate need of a win to preserve their slim playoff hopes alive, having lost to the division-leading Cowboys in the waning seconds of last week’s game. Their chances were not looking particular high after Washington slogged down the field in a 73-yard, 15-play touchdown drive to start the game. New York went three-and-out on their first possession, and did the same after being pinned down on their own 1-yard line when they got the ball for a second time.

Despite a 62-yard punt by Steve Weatherford, the Redskins had good field position to start a drive which bridged the first two quarters; they finished it with a short pass from Robert Griffin III to Logan Paulsen, who ran it in the rest of the way for a 19-yard touchdown.

Big Blue started the next drive on their own 26, but a 27-yard run by Peyton Hillis put them into Washington territory, allowing Andre Brown to finish the drive with a 23-yard touchdown run, cutting the Redskin lead down to 14-7.

Following a trio of three-and-outs, the Giants started their last drive of the half from their own 19. With 3:34 to go, Eli Manning led his team across the field on a series of short passes, ending with a 22-yard toss to Brandon Myers in the end zone which ultimately sent the game into the half tied at 14 apiece.

Neither team was terribly productive in the early going of the third quarter, but Manning was picked off in New York territory on a pass intended for Reuben Randle halfway through the quarter. A much needed defensive stop forced Washington to settle for a field goal, which they got to take a 17-14 lead.

The third quarter drew to a close on a short punt by the Redskins coupled with an offensive holding call that gave the G-Men possession at the Washington 46 to start their next drive. Manning connected with Victor Cruz for 8 yards, then with Myers for 18, and started off the fourth quarter with a 19 yard pass to Cruz which put the Giants on the 1-yard line. Andre Brown ran it in on a close call that was ruled a touchdown to give New York their first lead of the night as they went ahead 21-17.

Josh Brown would later kick a 39-yard field goal to put the Giants up by 7 before Washington started their final possession with 2:32 left on the clock. RGIII got his team to midfield, but miscommunication among the referees brought the drive to a premature close. A 4-yard pass on 2nd and 5 put the Redskins inches shy of a first down, however, one of the officials errantly signaled a first down and called for the chains to be moved. Washington was in the middle of a play on what they assumed to be 1st and 10 before another ref overruled the first and signaled that it was actually 3rd down.

Griffin’s pass was incomplete, and the team could not convert on 4th and inches, thus ending both their drive and the game. Whether Washington could have tied the game in the final minute cannot be said with any degree of certainty, but the Redskins had plenty of reason to be incensed at the way the game concluded.

Eli went 22/28 for 235 yards with a touchdown and an interception on the night. Hillis led the team in rushing with 45 yards on 6 carries, followed by Brown with 35 yards and 2 TDs on 14 runs. Cruz led in receiving with 80 yards on 6 receptions, and Myers caught for 61 and a TD on 5 catches.

The Giants, on the other hand, were happy to take the 24-17 victory, which keeps them statistically alive at 5-7 in the NFC East. They will play the Chargers next, at 4:25 PM on Sunday.

Jets Play Simms, Still Lose
The Jets had another abysmal performance yesterday, this time suffering a home loss at the hands of the Dolphins. After nearly two whole quarters of scoreless play, New York punted the ball back to Miami with just over 90 seconds to go in the first quarter. The Dolphins marched down the field and put up 34-yard field goal to take the first lead of the afternoon.

Gang Green had 44 seconds left for their last drive before the break, but on their third snap Geno Smith threw a pick to Dannell Ellerbe who returned it back to the Jets’ 44-yard line. Miami took advantage and put up another field goal to go up 6-0 entering the half.

Matt Simms replaced Smith to much fanfare in the third quarter, but was unable to accomplish much in the first two Jets’ possessions of the half. After he fumbled the ball at midfield, the Dolphins recovered and quickly found their way into the end zone on a deep pass by Ryan Tannehill to take a 13-0 lead.

Simms got New York into the red zone on the next drive, but after reaching the 2-yard line couldn’t finish the drive. Nick Folk kicked a 20-yard field goal to finally put the Jets on the board ten minutes unto the third quarter. Unfortunately it was also the last Jets’ scoring drive, and the Dolphins answered with another touchdown on their ensuing possession. Miami went on to beat New York 23-3.

Knicks Continue to Come Up Short
The Knicks entered last night’s game against the Pelicans on an eight-game losing streak, hoping to finally get a win against a sub-.500 opponent.  They got off to a good start, trailing for less than a minute through the first quarter and breaking a 16-16 tie with a Felton layup and Stoudemire dunk to exit the period up by four.

New Orleans regained the lead early in the second quarter, but a pair of threes from Shumpert and Felton tied the game at 36 apiece, setting Bargnani up to put them ahead on a series of foul shots. New York led 49-44 going into halftime.

The Pelicans tied the game again early in the third, and the two teams struggled to establish a lead for the remainder of the quarter; an 8-0 run gave New Orleans a 76-74 advantage entering the final quarter. The lead exchanged hands several times throughout the fourth, including one point when a Hardaway three put the Knicks ahead 88-82, but despite the young player’s best efforts he could not keep New York on top in the closing minutes. New Orleans won 103-99.

Carmelo Anthony posted a double-double in the loss with 10 rebounds and 23 points on 9 of 21 shooting. Tim Hardaway Jr. had a career-high 21 points through 24 minutes of play, and went 5 of 8 from beyond the arc. Andrea Bargnani put up 17 points, and Felton and JR Smith posted 12.

The Knicks have now lost their ninth straight game, tying their longest cold streak since 2006, and their seventh straight home game, tying a franchise record. They will have several days to prepare for the Nets, who they will face in Brooklyn on Thursday.

Nets Defeat Grizzlies
Looking to avoid another loss like they 114-95 defeat handed them by the Rockets on Friday, the Nets put up a consistent offensive effort throughout Saturday night in Memphis.

After going down 15-10 in the first quarter, Joe Johnson led the Nets on 14-4 run during which he scored all but 3 of Brooklyn’s points. The Nets left the first quarter up 24-19. The Grizzlies cut back within four points in the second frame, but the Brooklyn bench recovered and helped the team increase their lead to 48-37 before the half.

Lopez put up four points early in the third, as the Nets maintained the 9-point spread. The lead was upped to 14 before Memphis ended the frame with an 8-2 run—it was the only quarter in which they outscored Brooklyn.  The Nets kept pace with the Grizzlies through the fourth, preventing any hopes of a comeback for Memphis as Brooklyn took a 97-88 win.

Johnson led the team in scoring with 26 points, followed by Andray Blatche’s 21 and Brook Lopez’s 20.

Islanders Remain in Last Place
The Islanders were hoping to break a long losing streak over the weekend, and looked like they might do just that late Saturday night against the Capitals.

Washington took the first lead of the night when Aaron Volpatti knocked a shot past Anders Nilsson halfway through the second period, but Cal Clutterbuck tied the score on a shorthanded goal four minutes through the third period.

With less than two minutes left on the clock, Thomas Vanek put New York ahead with a wrist shot, making a 2-1 victory appear all but certain. The Capitals were not willing to go down easily, however, and with 49 seconds to go Nicklas Backstrom scored a shorthanded goal to tie the game. Alex Ovechkin knocked back the game winner in overtime, handing New York a 3-2 loss.

Nilsson stopped 27 of 30 shots in the Islanders’ sixth straight loss. They will play the Penguins next, at 7:00 PM tomorrow.

Rangers Hang on to Third
The Rangers took a commanding lead against the Canucks on Saturday and never let it go. Chris Kreider scored the first goal of the afternoon on a wrist shot midway through the first period, and scored his second goal on a power play four minutes later.

Rick Nash made it 3-0 with a tip-in 17 seconds into the second period, and Michael Del Zotto slapped in the fourth New York goal eleven minutes after that on another power play. Vancouver got on the board before the end of the period with a backhanded shot off the stick of David Booth.

Kreider pulled a hat trick nearly ten minutes through the third, making a late-game goal for the Canucks mean very little.  Cam Talbot stopped 35 of 37 shots as the Rangers took a 5-2 win.

The Rangers will play the Jets next, at 7:00 PM tonight.