Carmelo Anthony established a streak of his own as the Knicks won again last night. The week was more of a mixed bag for the rest of New York’s teams. 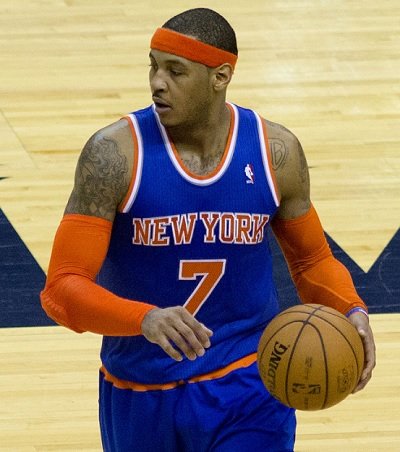 The Knicks faced one of their stiffest challenges since starting their longest win streak of the season when they travelled to Miami on Tuesday. The Heat may have had their historic 27 game streak come to an end, but they still lead the East and the NBA in total games won.

Fortunately for New York, Miami was without its superstars LeBron James and Dwayne Wade when they came to town. Chris Bosh was still in uniform, however, and powered the Heat to a 58-50 lead entering halftime. Carmelo Anthony would not take the deficit lying down, leading his team through a strong half in which the Knicks erased the deficit by holding Miami to less than 20 points in both of the remaining quarters. The Knicks had a two point lead after the third quarter and a 102-90 win after the fourth, giving them a 3-1 record against the Heat as they closed out the season series.

Melo tied his career-high 50 points in the victory, leaving room only for JR Smith and Raymond Felton to join him in double digits. They had 14 and 10 points respectively.

Anthony stayed hot as his team travelled to Atlanta the next day, playing a key role as the Knicks tried to pick up their tenth win in a row.

New York led 47-40 at the half, but a 28-21 third allowed the Hawks to tie the game at 70 early in the fourth. A steal courtesy of Felton led to a Smith layup, and was followed by 6 straight points from Felton. The outburst gave the Knicks an eight point lead which Anthony made sure they would not relinquish as they won 95-82.

With that win, New York took a ten game streak with them as they hosted Milwaukee last night. After a 19-19 first quarter, the Bucks looked as though they might be able to end the streak as they outscored the Knicks 26-17 in the second.

New York would not go down so easily. Anthony rallied the team as they doubled up the Bucks with a 42-21 third and kept the hits coming to take a 101-83 win.

That game gives the Knicks a now 11 game win streak and Carmelo another spot in the history books. On top of 14 rebounds, Melo scored 41 points to tie Bernard King’s record of 3 straight 40+ point games, making him only the second player in Knicks’ history to accomplish that feat.

JR Smith did not accomplish anything so grandiose, but he did put up a double-double of his own with 30 points and 10 rebounds on the night.

The Knicks will try to extend their winning ways to 12 straight when they face the West’s number one seed, the Oklahoma City Thunder, tomorrow afternoon at 1:00 PM.

The Nets closed out an eight game road trip with a blowout in Cleveland on Wednesday.  After leading 28-20 in the first quarter, the Nets put the game completely out of the Cavaliers reach with a 38-16 second. Brooklyn eased up a little in the second half, allowing the Cavs to close some of the 30-point gap, but kept them at arm’s length as they took a 113-95 win.

MarShon Brooks led with a game-high and personal career-high 27 points in his first start of the season, contributing 7 assists along the way. Deron Williams followed closely with 24 points and 8 assists, while Brook Lopez scored 14. CJ Watson led the bench with 12 points and Andray Blatche scored 11.

The victory gave the Nets a 5-3 record on their late-season extended road trip and guaranteed their first winning road record since joining the NBA in 1976.

The Nets still looked strong as they returned home to the Barclays Center the next day, jumping out to a 26-13 lead over the Bulls in the first quarter. The 13 point lead dwindled only slightly as Chicago outshot Brooklyn by  2 in the second, but the third quarter put the Bulls right back into the game.

Outscoring the Nets 29-20 in the third, the Bulls cut the lead down to just two entering the fourth. Brooklyn looked as though they could hold off the resurging Chicago offense, but the Bulls scored the final 5 points of the night to take a 92-90 win. Eight turnovers in the last quarter certainly did not do Brooklyn any favors in the loss.

Williams led the game with a 30 point and 10 assist double-double, backed up by Lopez’s 28 points and Johnson’s 12.

With a close win over the Magic last night, the Bulls now stand only a game behind the Nets for the fourth seed. Brooklyn will try to maintain position when they face the league’s worst team, the Charlotte Bobcats, tonight at 7:30.

The Mets opened up baseball season in impressive fashion with an 11-2 win over the Padres. They kept rolling as Matt Harvey held San Diego scoreless through 7 innings, picking up 10 strikeouts along the way.

The Padres did score four between the 8th and 9th, but it was far too little too late. New York had established a 2-0 lead with a homerun off Lucas Duda’s bat back in the second; Duda came back home in the fourth on a John Buck homer that put the team up 4-0. 4 more runs in the 5th put the game out of reach, leading to an 8-4 victory.

Unfortunately, the Mets could not complete the sweep as they fell in a pitcher’s duel the next day. Dillon Gee allowed only one run through 6 and a third, to which San Diego added an extra run in the eighth. The Mets scored their lone run on a homer from Buck in the 9th inning as they fell 2-1.

New York fared little better against 0-3 Miami last night. Jeremy Hefner allowed only one run in the second as he pitched 6 innings, but the Marlins drove in 5 in the 7th and tacked another run on in the 9th for good measure.  The Mets did string together three runs in the 7th and two more in the 9th, but fell 7-5.

They play the second of three games with the Marlins at 1 o’clock today.

The Yankees’ second game was almost as rough as their first. After losing 8-2 to the Red Sox on opening day, the team quickly saw their second game get away from them as well. Hiroki Kuroda allowed two runs before having to leave with a bruised middle finger resulting from a line drive smacking his pitching hand in the second inning.

With yet another injury to add to the list, the Yanks tried to string together a win with a great deal of help from their bullpen, but came up short as they allowed another 4 to score in the 3rd.

Travis Hafner put New York on the scoreboard with a homer in the 4th, and Vernon Wells had a three-run shot in the 8th, but it was not enough to overcome Boston. The Yankees lost again, 7-4.

Down by two games in the opening series, and down a great many players, Andy Pettitte stepped in to play the role of home-team hero before a 7 game road trip. He held the Sox to just one run in the 7th as he pitched 8 dominant innings to give the bullpen an already much-needed respite and his team a much-needed win. Mariano Rivera came in to pick up the first save of his final season, giving the Yankees a 4-2 win.

Ivan Nova pitched the first game of a series with Detroit yesterday, but he looked just as shaky as he had over the second half of last year. He was pulled in just the fifth inning after hitting Miguel Cabrera to put runners on the corners. Boone Logan came in to face Prince Fielder, but gave up a three-run homer which erased the 3-2 lead Kevin Youkilis had established with his own home run in the top of the inning.

Detroit went on to score another run in the 6th and two more in the 7th, taking an 8-3 win. The Yankees will try to pick up their second win at 4:05 PM today.

The Rangers split a pair of home-and-home games against the NHL East-leading Penguins. The first of the two games was not just a notch in the win column, but also a moral victory.

Having struggled to get their offense going all season, the Rangers got off to a hot start when they struck first with a Richards goal halfway into the opening period. McDonagh added to the lead two minutes later and Clowe made it 3-0 two minutes after that.

Brassard opened the second period with a goal before the two minute mark, which was followed quickly by the lone successful shot for the Penguins. Clowe picked up his second goal of the night eight minutes later. With a decisive lead going into the final period, New York’s defense held together and Moore struck the finishing blow with just over ten minutes to go.

The Rangers won 6-1 at home in a game during which Lundqvist stopped all but one of 27 shots that came his way.

Last night’s follow-up in Pittsburgh saw notably fewer goals, with both teams going scoreless through the first two periods. Jussi Jokinen, a last-minute trade and newcomer to the Penguins, put Pitt on the scoreboard thirty seconds into the last regulation period, but Nash tied things up on an assist from Stepan with five minutes to go.

Neither team could score again in regulation or in overtime, and fared little better in the ensuing shootout. Jokinen was the only one to score, doing so in the first round and giving the Penguins an OT victory. Lundqvist again stopped 26 of 27 before the shootout.

Now the seventh seed in the East, the Rangers will try to stay in playoff contention as they face the Hurricanes at 7 o’clock tonight.

The first half of Tuesday’s game against the Jets was a tug of war for the Islanders. After scoring first on a Lee goal 16 minutes into the game, New York found themselves tied not two minutes later. They trailed 2-1 six minutes into the second, but tied things up again before the ten minute mark courtesy of McDonald.

With less than half a minute left in the period the Islanders retook the lead on a Nielson shot. 3 goals would prove sufficient to win the game, but Moulson added to the lead with two minutes left in the game, and Tavares scored an empty netter shortly thereafter to put the Islanders up 5-2.Poulin saved 23 of 25 on the night.

Far less scoring was to be had Thursday night. The Capitals found the net first, with 13 seconds to go in the opening period, and held a 1-0 lead for most of the game. Okposo tied the score with under 5 minutes left in the game, forcing a scoreless overtime and subsequent shootout.

Ovechkin scored the lone goal of the shootout in the second round, giving Washington a win over New York. Nabokov stopped 21 of 22 before the shootout.

The Islanders will try to hang on to their spot as the eight seed when they face Tampa Bay at 7:00 PM today.