A mixed weekend for New York that marked the beginning of football season ended in a Giants game marred by turnovers. 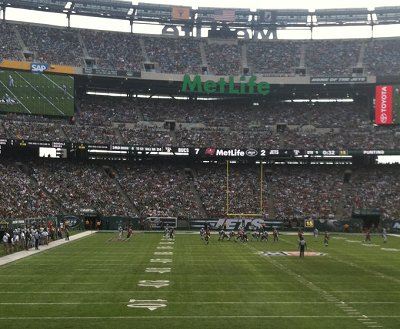 Jets Edge Out Revis’ New Team
The Jets did not look particularly impressive in a sloppy game against the Buccaneers in their season opener on Sunday, but they won it nonetheless. They were gifted an early lead when Tampa quarterback Josh Freeman fumbled the ball into the end zone early in the first quarter and was then forced to kick it out for a safety to put New York up 2-0.

Freeman redeemed himself on a 17 yard touchdown pass to Mike Williams with 1:07 left in the first, putting Darrelle Revis’ new home up 7-2. Nick Folk cut the lead down to 2 late in the second quarter and the Bucs rushed in another TD to go up 14-5. Before the half would end, however, rookie QB Geno Smith threw his first professional touchdown to Kellen Winslow, cutting the deficit down to 14-12.

A long scoreless stretch in the second half eventually gave way to a second Folk field goal with 5:05 to go in the game. Tampa retook the lead with a field goal of their own, leaving New York only 34 seconds to retaliate.

Time was running out for the Jets and a win looked increasingly improbable, but as Geno Smith scrambled for ten yards to try to keep their last drive alive he was hit after crossing out of bounds, pushing Gang Green forward an extra 15 yards on the penalty.

New York’s offense struggled to fully capitalize on the many penalties Tampa Bay incurred over the course of the day, but this one put them well within field goal range. Folk edged one last kick through the uprights, putting the Jets ahead 18-17 with only 2 seconds left on the clock. After a squib kick that was retuned a little far for comfort, they won by that score.

Geno Smith went 24/38 for 256 yards with 1 TD and an interception; he also led the team in rushing with 47 yards on 6 carries. Winslow led the receiving core with 79 yards on 7 catches and a TD, while Kerley had 45 yards on 3 receptions.

The Jets will be on short rest when they play the Patriots at 8:25 PM on Thursday.

Big Blue made a huge defensive stop, holding the Cowboys to a field goal, but the interception was a sign of things to come. Wilson fumbled the ball into Dallas’ hands on the next possession, and Eli threw another pick on the one that followed. Despite the turnovers, the Giants were able to even the score on their fourth drive of the night, and entered the second quarter tied 3-3.

The Cowboys put up another field goal and their first touchdown before Manning connected with Victor Cruz right after the 2-minute mark to make it 13-10.

Unfortunately, the G-Men’s inability to hang onto the ball was not resolved during halftime—Wilson fumbled again early in the third, this time allowing Dallas to return the ball all the way back for a touchdown and take a 20-10 lead.

Tony Romo connected with Jason Witten for another Cowboys’ TD, but Eli brought it back down to a two-possession game with an 80-yard drive culminating in an 18-yard touchdown pass to Cruz.

The Cowboys notched a field goal early in the fourth quarter before Manning connected with Cruz in the end zone for a third time to make it 30-24.

A third Manning interception was brought back for a Dallas TD later in the quarter, and followed with a failed 2-point conversion attempt. The Giants were able to bring the spread back within one possession on another Manning touchdown (this time to Brandon Myers), but took all except the last 11 seconds of the game to do so and could not uncover the subsequent onside kick. Dallas won the game 36-31.

Eli went 27-44 for 450 yards and 4 touchdowns last night, but also threw 3 interceptions. Victor Cruz led the team in receiving with 118 yards and 3 TDs, Hakeem Nicks caught for 114 yards, and Rueben Randle had 101—all three of them broke the 100 yard mark on 5 receptions. Da’Rel Scott led the team in rushing with just 23 yards on 5 carries, and Wilson had only 19 yards to show for his 7 carries and 2 fumbles.

The Giants will face Eli’s older brother when they host the Broncos at 4:25 PM on Sunday for the team’s home opener.

Mets Recover Against Indians
The Mets picked up where they had left off the previous night when they faced the Indians for a second game on Saturday. Unfortunately they left off giving up a grand slam to Nick Swisher in an 8-1 loss, and picked up by letting him hit a run-scoring double off Jon Niese in the bottom of the first. Niese would go on to give up an RBI single to Carlos Santana and 3-run double to Ryan Raburn before getting out of the inning.

Matt den Decker made a slight dent in the 5 run deficit with an RBI single in the top of the second, but Swisher answered with a solo shot in the bottom half. Niese settled down after that point, giving his team a chance to move back within striking distance as Justin Turner doubled in 2 runs in the sixth and Juan Lagares singled him home to make it 6-4.

Niese was taken out for Scott Atchison in the seventh inning, but Atchison was unable to keep the game close, giving up a 3-run homer to Asdrubal Cabrera before collecting the last out. Unable to rally, New York lost 9-4.

The team was at last able to quiet Cleveland’s bats on Sunday as Daisuke Matsuzaka turned in his best start since rejoining the big leagues as a Met. After three scoreless innings Turner put New York on top with a solo homerun (his second of the year), providing a lead which lasted until Daisuke began to unravel in the sixth inning. Matsuzaka got the first two batters out, but loaded the bases afterwards and was replaced by Vic Black who in turn hit the first batter he saw, forcing in a game-tying run.

Cleveland was unable to capitalize any further, and neither team scored in the seventh or eighth. Eric Young broke the tie with an RBI double in the top of the ninth to put the Mets up 2-1—a lead which held as LaTroy Hawkins collected his 8th save since filling an injured Bobby Parnell’s role.

The Mets will start a series against the Nationals at 7:10 PM tonight and continue it at the same time tomorrow and Wednesday.

Yankees Avoid Sweep
After losing two high-scoring games to the Red Sox to start a 4-game series, the Yankees hoped their long reliever, David Huff, could slow down the Boston onslaught as he got the start Saturday afternoon. He got two strikeouts while retiring the side in the first inning, but gave up a 2-run homer to Mike Napoli in the second.

Lyle Overbay cut the deficit down to 1 with an RBI single in the bottom frame, however Huff gave up a 3-run shot in the top of the third. Robinson Cano knocked in his own RBI single, but Huff allowed 3 more runs to score in the fourth before being taken out for Jim Miller, who in turn let another 2 score, putting Boston up 10-2.

After Ichiro Suzuki drove in the third Yankee run on a double, Miller gave up a 2-run homer before being replaced by Brett Marshall in the fifth. The Bronx Bombers had themselves a big inning in the sixth, starting with a Brett Gardner RBI double and a Derek Jeter run-scoring single. Alfonso Soriano knocked in 2 more with a single to make it 12-7.

Mark Reynolds attempted to reignite the rally in the eighth with a double that scored JR Murhpy and Gardner, but that proved the end of New York’s offensive outburst. Napoli hit another homerun in the ninth, and the Red Sox took their third straight game from the Yankees 13-9.

With a weary bullpen, the Yankees needed a strong start from Hiroki Kuroda on Sunday to stop the bleeding and avoid a sweep. The struggling ace allowed a pair of doubles to let the Red Sox take a 1-0 lead in the second, but settled down afterwards which gave Reynolds a chance to tie the game on an RBI double in the fourth.

Cano put the Yanks ahead with a 2-run double in the fifth, though Jarod Saltalamacchia cut the lead down to 3-2 in the sixth. Kuroda hung on to finish the inning and turned the ball over to Shawn Kelley in the seventh, who worked into and out of trouble. Mariano Rivera was called on an inning early and got 2 strikeouts as he held down the eighth, but gave up a leadoff homer to Will Middlebrooks in the ninth to tie the game before retiring the next three batters.

With one out in the bottom of the ninth, Ichiro Suzuki singled his way onto the base path against Brandon Workman. He reached second on his 20th stolen base of the year, then advanced to third on a Vernon Wells fly ball. A wild pitch by Workman in the ensuing at-bat allowed him to run home and give New York a 4-3 walk-off victory.

The Yankees will start a long intra-divisional road trip beginning with a four game set against Baltimore tonight. Each of the four will begin at 7:05 PM. They now stand 2.5 games behind Tampa Bay in the Wild Card standings, with Baltimore and Cleveland half a game ahead of them.