The New York Jets have picked their starting QB for Week 1, but he may not stay in the position long. 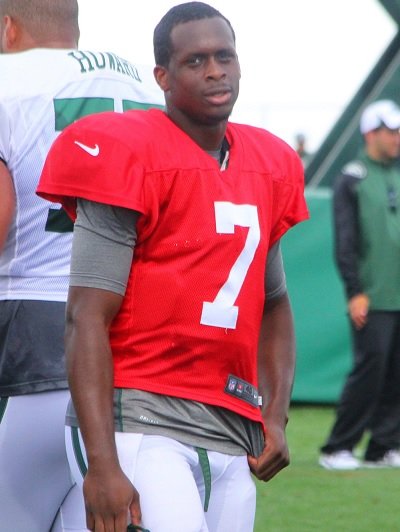 Florham Park, NJ – September 4, 2013 – As the latest move in the Jets’ QB shuffle, New York’s AFC team has named second-round draft pick Geno Smith as their starting quarterback for Sunday’s opener against the Tampa Bay Buccaneers. Smith ran into some trouble when he injured his ankle during the preseason and has since looked less sharp than Jets fans would like, but head coach Rex Ryan is not concerned.

“Our whole team is confident in Geno,” said Ryan. “We recognize the challenges of a rookie quarterback, but I think each one of us will pick our own game up.”

Geno Smith is excited for the opportunity, and has no intentions of squandering it. “To have an opportunity to be a starting quarterback as a rookie in this league is great,” he said, “but I’m not here to celebrate. I’m still working hard, still trying to prepare myself, mind and body, to go out there and have a great game.”

The decision to start their new QB may have been easier than the Jets organization would have liked, as their previous starter, Mark Sanchez, injured his right shoulder in a preseason game against the Giants. Sanchez is presently rehabbing his arm, and may yet retake his role as the starter once healed.

“The competition from my understanding is still going,” said Smith. “The only word that I got was regarding this week and that was it. I’ve got to earn it. Nothing’s given in this league, so I’m going to go out there and I’m going to do that.”

“It's unfortunate that Mark was injured, obviously, but he is working extremely hard to get back,” Ryan said. “But he's just not ready right now. It's similar to last week—we knew he wasn't ready then. He's not ready now and we'll see what the future holds as we move forward.”

With Sanchez hurt, Matt Simms will take over the backup role for the Jets for the first time in his young career, as Greg McElroy was released last week. Simms was originally signed by the team in May 2012, but has yet to make it into a regular season game.

Rex reiterated his confidence in Smith several times during a post-practice news conference, but also tried to temper expectations for when the new QB faces former Jet cornerback Darrelle Revis in Week 1. “We don’t need him to go out and do it himself,” he said. “It’s a big puzzle, and he's just part of that puzzle. His piece might be a little bigger than some, but he’s just part of the puzzle.”

Several other starting roles were also filled yesterday. Bilal Powell was announced as the starting tailback, Vladimir Ducasse will be the left guard for the season’s first snap, and Antonio Allen will be the starting safety.

“I know the entire team is confident,” Ryan concluded. “We are definitely confident that Geno's out there and I think all of our guys are looking forward to see what he can do. It's a tough test going against Revis and two Pro Bowl safeties. It's going to be a test, but it's one we're excited about.”