Yankees and Mets Both See Blowouts Over Labor Day Weekend

The Yankees had their strongest inning of the year yesterday, but the Mets were crushed in Atlanta. 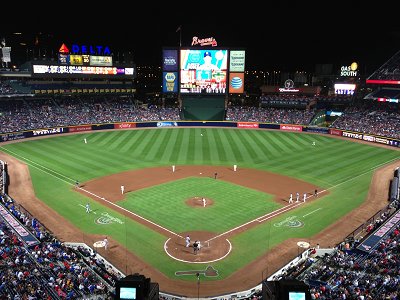 After beating the Nationals by a hair in their series opener, the Mets went to town in Washington on Saturday night. Omar Quintanilla gave the team an early lead when he hit a 2-run double in the second, but the heavy hits came an inning later.

Following a leadoff single and stolen base from Eric Young, Daniel Murphy drove in the first run of the third on a groundball single to center field. Ike Davis later brought him home with a sacrifice fly, and Matt den Dekker (who had been called up to the Majors just two days prior) added the next run with a single of his own. Zack Wheeler worked a bases-loaded walk, and Eric Young came back to the plate to smack a 2-run single, putting New York on top 8-0.

Wheeler did not allow a run until the sixth inning when he ran into a slight bit of trouble, giving up a sac. fly and RBI single to put the Nats on the board. Murphy and Juan Lagares made up for the momentary lapse with an RBI double and 2 RBI single in the eighth, leading to an eventual 11-3 victory for the Mets. Zack Wheeler improved to 7-3 with the win.

The Mets kept rolling early in Sunday’s end to the series, which opened with a Young leadoff double followed by an RBI double for Murphy. Lucas Duda soon singled Murphy home, and Matt den Dekker added to the lead in the second inning with his first Major League homerun.

Niese left the game before the bottom of the seventh got started, and Scott Atchison gave up the third Washington run in his absence. Scott Rice took the ball in the eighth, but was taken out after letting runners advance to 2nd and 3rd with one out. Gonzalez Germen proceeded to give up 3 straight runs, putting the Nationals ahead 6-5. The top of the Mets’ lineup was retired in order in the ninth, handing them a hard loss as the Nats avoided the sweep with a come-from-behind victory.

Daisuke Matsuzaka took the mound as the team travelled to Atlanta yesterday afternoon, where he gave another poor showing in his third straight start as a Met. A leadoff single in the first inning was followed by a second single, then a 2-run double.

Unfortunately the bullpen fared no better than the starter, allowing 2 runs to score in the fifth, then two more in the sixth. A pair of RBI singles from Duda and Lagares in the seventh was met by a trio of Atlanta runs in the eighth. The Mets lost 13-5 as Daisuke fell to 0-3 on the year.

The Yankees took a slight edge against the Orioles on Saturday afternoon when Robinson Cano brought Brett Gardner home on a double in the first inning. That run proved absolutely vital as the team would not score again for quite some time.

Thankfully, Ivan Nova had the b0est start of his young career on that day, taking the 1-0 lead and making it good enough for a win. Throwing 104 pitches over 9 innings, Nova allowed just three hits and one walk. Robinson Cano hit his 25th homer of the season in the eighth inning, but the extra run proved unnecessary as Nova pitched his first complete game shutout, earning his 8th win and giving New York a 2-0 victory. Nova’s first complete game came in early July of this season, and was also against Baltimore.

Andy Pettitte wasn’t quite as sharp in Sunday’s close to the series, needing 93 pitches to get through six innings, but he was still good enough to hold the Orioles scoreless. Before he left, Alfonso Soriano scored the first run of the day with a single back in the third inning, and Brett Gardner worked a bases-loaded walk in the fourth. Derek Jeter’s ensuing sac. fly gave the Yankees a 3-0 lead.

It all started to fall apart when Pettitte started the bottom of the seventh with two singles, however. He was taken out for Shawn Kelley, who gave up an RBI single followed by a 3-run homer. Boone Logan was brought on to try to stop the bleeding, but instead allowed a hit and a walk before being replaced by Joba Chamberlain. Joba was able to at last get the first out of the frame; unfortunately Adam Jones hit the second 3-run blast of the inning before Chamberlain could get the final two outs.

The O’s did not score again, nor did the Yanks, as Baltimore took the game 7-3 and New York won the series 2-1.

The Yankees were able to bounce back on Labor Day against the White Sox, starting with a Derek Jeter RBI single in the first inning. A nearly 2-hour rain delay midway through the top of the second scratched both teams’ starters from the rest of the game, and New York turned to David Huff for another long relief outing.

Huff performed quite admirably, throwing five and two thirds innings without allowing a run, though he had very little stress after his first full inning of work. With the bases loaded and no outs, Mark Reynolds doubled the New York lead on an RBI single in the fourth inning. Austin Romine drove in two more with his own single, and Gardner brought Romine home on a double.

Jeter hit his second RBI single of the day before Cano popped one up for the first out. Soriano scored Gardner with a double and Alex Rodriguez, who led the inning off with a double, worked a walk following a popup which Chicago’s catcher was unable to put away. Vernon Wells reached base safely on a failed force attempt, giving Jeter and Soriano the chance to score the 7th and 8th runs of the frame.

The rally was the single most productive one of the year for the Bronx Bombers, and gave them a 9-0 lead that held firm until Paul Konerko homered off Huff in the seventh. New York took the game 9-1, and Huff was credited with his second win.

The series will continue at 7:05 PM tonight and finish at the same time tomorrow. The Yankees now stand 3 games out of a Wild Card position.