The Yankees Topple the Orioles, and the Mets Squeeze Victory Out of Washington

Friday night brought a sweet start to a new series for both the Mets and the Yanks. 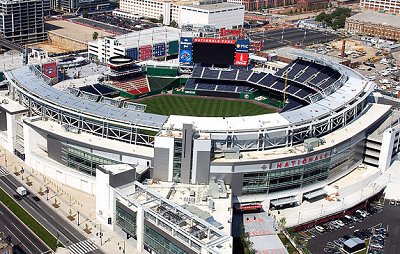 Following a strong showing by Zack Wheeler in a disappointing 2-1 loss to the Phillies on Monday, Jon Niese put together an even more dominating performance in Tuesday’s follow-up. After three scoreless innings, Daniel Murphy gave him a lead to work with an RBI single in the bottom of the third.

Travis d'Arnaud offered some insurance in the form of a sacrifice fly in the sixth, and after Omar Quintanilla was intentionally walked to load the bases a great deal more damage came off the bat of Niese himself as he hit a bases-clearing double to put the Mets ahead 5-0. Niese’s amazing night continued as he hurled 113 pitches over the course of 9 innings, allowing just 3 hits and 1 walk as he pitched a complete game shutout to earn his 6th win.

The team kept rolling behind their new pitcher, Daisuke Matsuzaka, in the early going of Game 3 on Wednesday. After two-and-a-half scoreless innings, Ike Davis put New York on the board first with an RBI single in the bottom of the third.

Jimmy Rollins tied the game soon afterwards, however, knocking in an RBI double off Daisuke in the top of the fourth. The game really got away from him in the fifth when after loading the bases Matsuzaka hit a batter to bring in the go-ahead run; he was replaced by Robert Carson, who in turn gave up a 2-run single, putting Philadelphia on top 4-1.

The Mets would not score again until the seventh when Andrew Brown brought Daniel Murphy home on a double, but it was the last run they could muster. Philly took the game 6-2 as Daisuke lost his second game as a Met.

Carlos Torres got the start in Thursday’s close to the series, and he also got much more support than Mets’ starters are accustomed to. Murphy drove in the first run on a double in the third and, unlike the previous night, the team was able to quickly add to the lead he provided. Anthony Recker smacked a 2-run blast out of the park in the fourth, and Andrew Brown made it 4-0 with an RBI single in the fifth.

The afternoon didn’t get any easier for the Phillies when relief pitcher Cesar Jimenez balked in a run in the bottom of the sixth, and Murphy proceeded to pepper him for another RBI. Philadelphia finally got to Torres with one out in the seventh, driving in their first run on a sacrifice fly, but the spread climbed back up to six when Omar Quintanilla worked a bases-loaded walk in the bottom frame. Eric Young soon turned it into a complete blowout with a bases-clearing triple to but New York on top 10-1.

Philly attempted to make a dent in the deficit with a 2-run homer in the top of the eighth off Gonzales Germen, though they did not make any further progress. A Brown homer in the bottom of the inning put the Mets up 11-3, and LaTroy Hawkins worked a 1-2-3 ninth to end the game. Torres’ 3rd win of the season split the 4-game set down the middle for New York and Philadelphia.

Last night the Mets travelled to Washington where they fell behind the Nationals for only a brief moment. Dillon Gee gave up the first run of the night on a leadoff homer in the bottom of the third, but he maintained his composure and got through the rest of the inning without incident. Ike Davis responded in the top of the fourth with a 2-run blast to left center, giving the Mets a 1-run lead.

That score remained put until the top of the eighth when Andrew Brown tacked on a bit of insurance with an RBI single. The extra run proved vital as Gee gave up his second run on another solo shot two thirds of the way through the bottom frame, but Scott Rice was able to finish the inning and LaTroy Hawkins worked a 10-pitch ninth inning to pick up his 6th save. Gee improved to 10-9 on the season as the Mets won 3-2.

Game 2 against the nationals will take place at 7:05 PM tonight, and they’ll finish the series at 8:05 PM tomorrow. The Mets are now in a virtual tie with Philadelphia for third place in the NL East.

Game 2 in Toronto got off to a mixed start for the Yankees. Derek Jeter picked up an RBI after Brett Gardner’s leadoff double, however Robinson Cano was hit on the hand by a pitch in the ensuing at-bat. Cano stayed in the game long enough to come home on Alfonso Soriano’s 3-run homerun, though he would leave in the bottom of the first with a contusion on his hand. The blast was the 400th of Soriano’s career, but Cano would need a few days to recover.

Soriano struck again in the third when he lead the inning off with a second homer, and Mark Reynolds added to the lead with a similar performance in the sixth. Alex Rodriguez joined the hit parade in the seventh with a solo shot of his own to put the Bronx Bombers on top 7-0.

For his part, Andy Pettitte continued a recent string of strong starts with an efficient 5-hit, 86-pitch 7 inning night. The Blue Jay did not score a run until Adam Warren took over in the bottom of the eighth, and it would be their only piece of offense on the night. Pettitte improved to 10-9 as the Yanks won 7-1.

The teams’ fortunes were reversed in Wednesday’s rubber game. With two on and two out in the bottom of the first, Hiroki Kuroda gave up a 2-run double to Brett Lawrie. He hit the next batter he saw then struck out JP Arencibia, but a passed ball and throwing error from Chris Stewart allowed Arencibia to reach first safely, and 2 more runs to come home.

Though half of those early runs were unearned, Kuroda’s struggles continued for a third straight game. He gave up a 2-run homer to Edwin Encarnacion in the second and a sacrifice fly to former Met Jose Reyes in the third, giving Toronto a 7-0 lead. Alex Rodriguez tried to spark a rally in the top of the fourth with an RBI single, and Mark Reynolds followed with a run-scoring double, but neither team would score again after that point. The Blue Jays took the game 7-2 and the series 2-1.

The Yanks returned home last night to start a 10-game home stand and begin the end of 16-straight intradivisonal games. CC Sabathia took the mound against Baltimore and he retired the first 10 batters he faced before allowing Chris Davis to single in the first run of the night in the fourth inning.

Alfonso Soriano paid the Orioles back in the bottom frame, hitting a 2-run homer to right field to put New York on top, but the O’s responded in kind in the fifth, then added an RBI single off CC to go ahead 4-2. New York would not go down easily, however, as Mark Reynolds followed Curtis Granderson’s leadoff double in the bottom half with an RBI double to cut the deficit down to 1. Ichiro Suzuki hit a 2-run blast the following at-bat, and Robinson Cano (who had returned from his hand injury) later singled in another run to put the Bronx Bombers ahead 7-4.

CC gave up another run, this time on a Nick Markakis single, in the sixth, forcing Girardi to take him out for Shawn Kelley two thirds of the way through the inning, and Kelley got the last out without allowing any more damage. A-Rod tacked on an RBI single in the seventh to put New York up 8-5, and Mariano Rivera came on to work a 1-2-3 ninth, earning his 39th save as Sabathia improved to 12-11.

The Yankees are now a half game behind the Orioles and 4.5 games out of the Wild Card spot. They will try to gain on both at 1:05 PM today, and do it again at the same time tomorrow.