The Yankees and Mets looked like mirror images of one another this week, as New York lived and died by the walk-off on Friday. 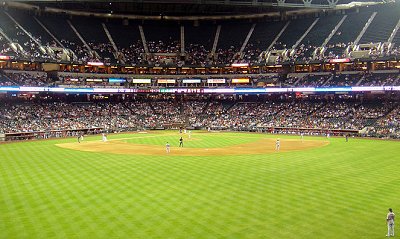 The Mets welcomed the Rockies to Citi Field by hitting Colorado’s Chad Bettis hard in the first inning of his first Major League start. After the young gun got Eric Young to groundout, Daniel Murphy singled on a groundball to left field; he would be forced out at second on the next play, but Marlon Byrd took his place on first base. Ike Davis doubled and Byrd moved the third before they both came home on a Juan Lagares triple to put New York ahead 2-0.

Bettis settled down enough to stay on through the fifth inning and did not allow another run in that time, but Jennry Mejia allowed Colorado to tie the game on a sacrifice fly in the fifth and leadoff homerun in the sixth. Lagares broke the tie in the eighth with an RBI single, giving New York a 3-2 lead which held as LaTroy Hawkins collected his first save of the season. Bobby Parnell was placed on the disabled list with a herniated disc in his neck before the series began, but will be eligible to return on August 15th if he recovers quickly.

New York kept rolling on Wednesday, beginning with an Omar Quintanilla RBI single in the second inning. John Buck duplicated that performance in the fourth, giving the Mets a 2-0 lead. Playing in just his second Major League game, Wilmer Flores broke the game open in the bottom of the eighth when he hit a bases-clearing double, bringing Lagares, Byrd, and Davis home.

The 5 runs gave Matt Harvey some well-deserved offensive support, but they came on a night he needed very little. Harvey pitched all 9 innings, striking out 6 and giving up only 4 hits as his first career complete game shutout lead the Mets to a 5-0 win and he improved to 9-3 on the season.

The Mets did not offer Dillon Gee half as much run support on Thursday—thankfully he needed almost as little as Harvey. After three scoreless innings Gee gave up a leadoff homerun to Corey Dickerson; Colorado’s lead was, however, short lived. With the bases loaded in the bottom frame Wilmer Flores grounded to short, allowing Murphy to score from third. Anthony Recker followed up with a sacrifice fly to drive Byrd home, giving New York a 2-1 lead.

Gee stayed on to pitch eight and two thirds innings, holding down the lead until the bullpen took over. David Aardsma picked up the final out of the eighth and LaTroy Hawkins worked a 1-2-3 ninth for his second save as the Mets swept the Rockies and Gee improved to 8-8 on the season.

The team looked like it was ready to keep rolling when they travelled to Arizona last night. After Jeremy Hefner threw three scoreless innings Justin Turner hit an RBI single in the top of the fourth to put the Mets on top 1-0. Unfortunately the lead did not survive the next inning, as Hefner gave up three 2-out doubles in a row—the last two scoring a run apiece.

Hefner got out of the inning, but after Justin Turner knocked in another run in the top of the sixth the bottom proved just as rough for him. It started with a single and a double putting men on second and third, then Hefner let Wil Nieves drive in a 2-RBI double to put the Diamondbacks up 4-2. The bullpen took over after that, and held Arizona down long enough for New York to attempt a comeback.

The eighth inning began with Murphy, Byrd, and Satin each singling to load the bases. Turner then hit a groundball to short, scoring his and the team’s 3rd run of the night, and Flores duplicated the performance to tie the game. Scott Atchison took over in the bottom of the ninth after the tie held for an inning, but he gave up a walk-off homerun to the second batter he faced, giving Arizona a 5-4 win.

The Mets will play the Diamondbacks again at 8:10 PM tonight, and finish the three-game set at 4:10 PM tomorrow as New York tries to recover from the loss and win another series.

The Yankees’ woes were not relieved in Chicago this week; after being blown out in Monday’s open to a 3-game series their offense still struggled to produce in Tuesday’s follow-up. It started well with their best pitcher on the mound in Hiroki Kuroda and an early lead stemming from a wild pitch which allowed Alfonso Soriano to score in the first inning, but the team would find no more luck on its side.

Brett Gardner attempted to run home from second on a Robinson Cano in the third inning, and touched the base an instant before catcher Josh Phegley could apply the tag, but a blown call robbed New York of what would prove a desperately needed run.

Kuroda gave up a run on a single in the fourth and another on a groundball in the sixth to put the White Sox ahead 2-1. An RBI double in the seventh put Chicago up 3-1, and though Gardner would go on to score Ichiro Suzuki on a line drive single in the ninth, the absence of his attempted third-inning run loomed large as New York ultimately fell 3-2.

Alex Rodriguez, who took the DH role on Tuesday, was walked in his first at-bat and hit by a pitch in his second. He lined out in his third and hit a groundball single in his final plate appearance.

The Yanks looked like they were ready to break their losing streak when Soriano smashed a 2-run homerun in the second at-bat of Wednesday’s game. The lead would grow in the third with a Vernon Wells RBI single, and Eduardo Nunez hit his first homerun of the season in the fourth, giving New York a 4-0 lead.

Chicago began digging into the lead in the fifth when Gordon Beckham hit CC Sabathia for a solo shot to put the White Sox on the board. Paul Konerko knocked in an RBI double in the seventh, and Alex Rios scored on a groundout shortly thereafter to bring the spread within 1. CC and David Robertson combined to get through the eighth without any further damage, but after getting the first two outs of the ninth in just 5 pitches, Mariano Rivera gave up a double followed by an RBI single to blow the save.

Now tied 4-4, Mo got the final out of the ninth and stayed on to pitch a 1-2-3 tenth, marking the first time he went more than one inning since the 2011 season. Robinson Cano put the Yankees ahead in the top of the twelfth with a booming leadoff homerun, but the lead would not last. After getting the first two outs of the bottom frame, Adam Warren gave up two singles followed by bases-clearing triple, giving Chicago a 6-5 walk-off victory. With that, the Yankees were swept by a team which had lost its previous 10 games, and they have now failed to win series in over a month.

Having just lost 4 straight and been swept by a team which was on an even longer skid, the Yankees desperately needed to defeat a Tigers team which won its last 12 coming into last night’s bout between New York and Detroit.

Soriano got things started in the Bronx with an RBI groundout in the bottom of the first. Cano expanded the lead in the third when he hit a double to drive Garnder and Suzuki home, giving the Yanks a 3-0 lead. Detroit was unable to do any damage to Ivan Nova until the seventh inning when Miguel Cabrera mustered an RBI single, but Nova got out of the inning without any further harm.

In a rare streak of disappointing performances, Mariano Rivera blew another save by giving up a 2-run homer to Cabrera, but the score remained tied through the rest of the inning. Still tied in the bottom of the tenth with two outs and the bases loaded, Bret Gardner ended extra innings with a groundball to leftfield, scoring Jayson Nix and giving New York a 4-3 walk-off victory. A-Rod went 0-4 in his first game back in Yankee Stadium this year.

The series will continue with a pair of day games at 1:05 PM today and tomorrow as New York tries to preserve its increasingly slim chances at a spot in the playoffs.