Remembering Those Who Fell on September 11, 2001 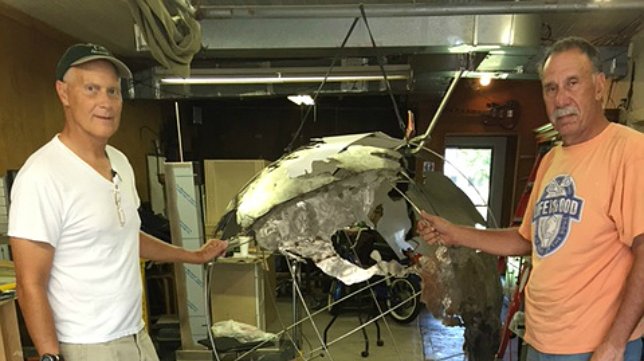 (L to R): Sculptors David Haussler and Anthony Ingoglia posing with a component of the 9-11 sculpture.

The terror attacks of September 11, 2001 have gone down in history as one the darkest days of both America and all of mankind, and the town of Plainview is determined to show that – even 15 years later – the tragic lives lost and harsh lessons learned that fateful day will never be forgotten.

Chamber of Commerce President Elan Wurtzel said that the road to give Plainview its own permanent testament to the horror and hope of 9-11 has been a long one; the Chamber acquired a 38-inch piece of World Trade Center steel several years ago, but due to various issues they were unable to pursue their goal of a memorial sculpture for public display until very recently. 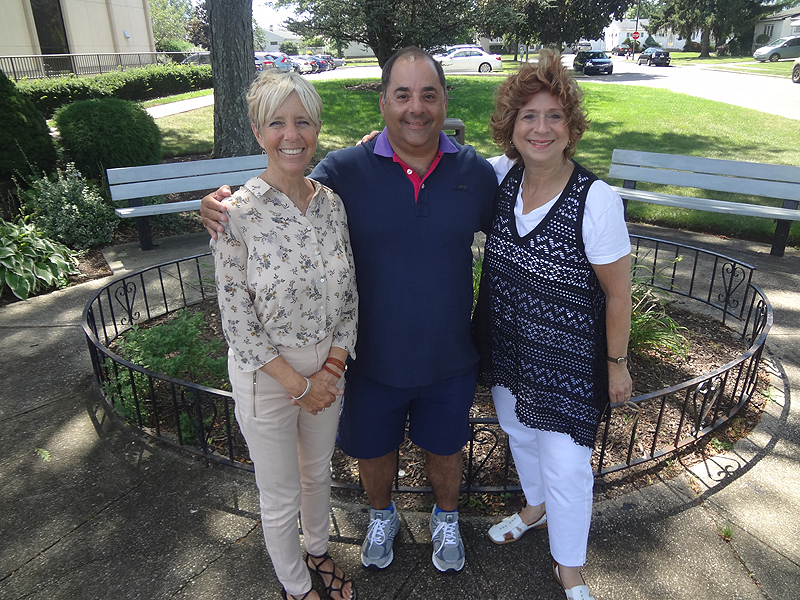 “There are two aspects to this project,” he said. “One is to give tribute to the people who lost their lives, and the second is to celebrate what makes our country great…freedom, liberty, and tolerance. And that's what this sculpture is intended to capture. So this will not be a sad occasion necessarily...we want to remember, but we also want to celebrate the important values of our country. Even though it was a horrible event, we're stronger for it.”

The Chamber formed a committee to oversee the creation of a memorial that would incorporate the World Trade Center steel they had in their possession, and set out to find the right person to breathe life into their vision; that man, according to Chamber Board Member Francesca Carlow, was a Fort Salonga sculptor named David Haussler.

“I passed a piece of his at the Long Island Art Institute in Deer Park many times, and it has a very intense look to it as well as being very quirky and comical. I went into the Art League and asked who the sculptor was, and they put me in touch with David,” she said. “When we were coming up with the concept for our 9-11 Memorial here, we put word out to the community for feedback, but there aren't a lot of sculptors around who can handle large works of the type we were looking for. Something that was at least ten feet tall that would make people stop, think, and contemplate what happened on September 11th.” 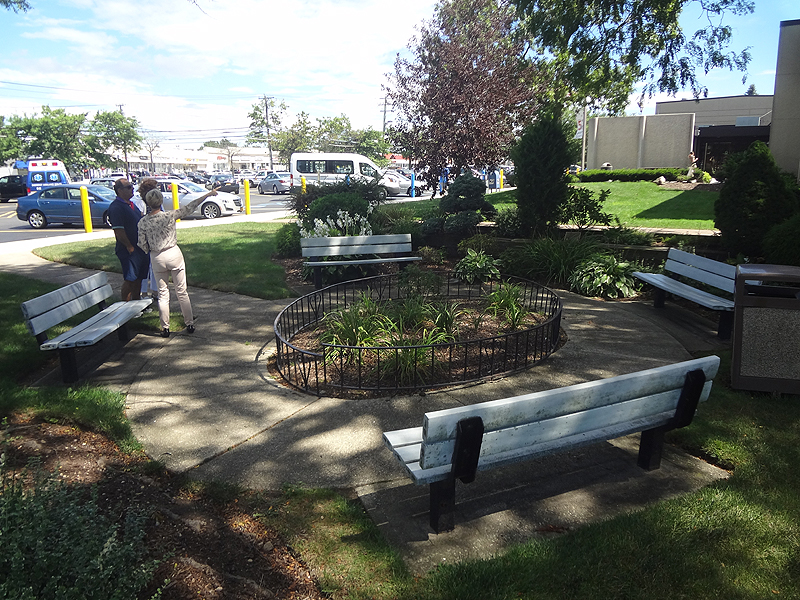 The Alma Craib Memorial Garden located next to the Plainview-Old Bethpage Public Library, where the 9-11 sculpture will be displayed.

Upon being contacted by Carlow, Haussler noted that he was very excited at the prospect of working on the project. He has been active in outdoor sculpture since the early 1980s, and said that one of the reasons why he loves this particular medium is that it's important for local artists to get their work out into the public.

“One of the things that many artists in general tend to do is make artwork but never show it to people,” he said. “I think it's really important for the artist to get their work out there, especially on Long Island because Long Island really is a big hub for artists, and I think getting an expression of what we do out in the public lets people enjoy it, and shows them that there a lot of creative people on Long Island, be they artists, musicians, writers, or anything else.”

However, before embarking upon this artistic undertaking, the 61 year-old Haussler was very up-front with the Chamber of Commerce about a very personal battle he was facing at the same time. 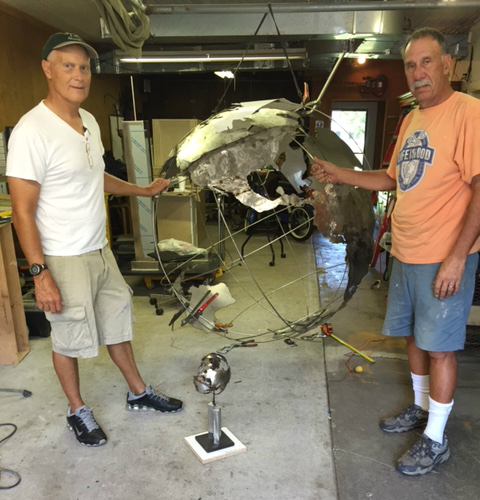 (L to R): Sculptors David Haussler and Anthony Ingoglia posing with a component of the 9-11 sculpture. Note the 10-inch scale concept model of the sculpture at their feet.

“I had just been diagnosed with Stage 4 esophageal and liver cancer. For some people that would be a private matter, but for me I made it public because I'm educating people…this way they know what you have, and what you're dealing with, but it doesn't stop the process of what you're artistically trying to create,” he said. “After showing several design sketches to the Chamber and the Plainview Library, we were able to extract several ideas and themes, and once we applied those ideas to the creative process, we were able to formulate something that I thought that the public would like. We use the image of the Twin Towers and the world, because this is a worldly matter and it encompasses everyone. Those were the key elements that we pulled together.”

The sculpture – which currently exists as a 10-inch miniature model while the full, ten-foot final version is being put together – will be made up of two steel beams embedded in a granite base to represent the World Trade Center, and will be topped off by a stainless steel globe housing the 9-11 steel within. The globe will rotate gently with the wind like a weather vane, will be lit for night-time viewing, and will feature no plaques or signage so as not to distract from its visual impact; instead, smartphone users will be able to scan a bar code to gain access to an interactive 9-11 presentation. 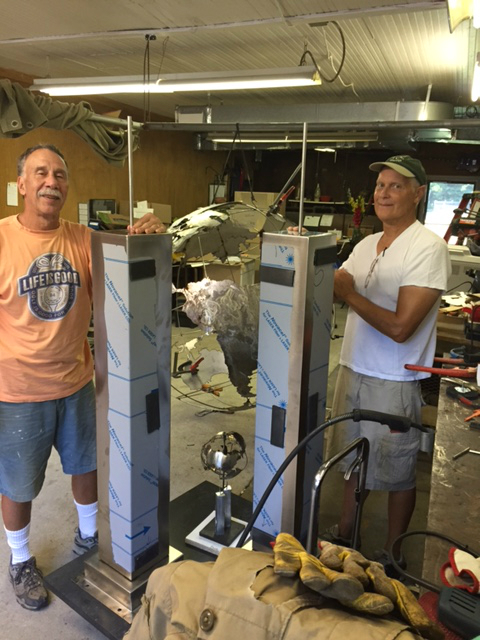 (L to R): Sculptors David Haussler and Anthony Ingoglia posing with a component of the 9-11 sculpture.

Wurtzel noted that the Chamber of Commerce is handling the expenses of the project – stated to be in the neighborhood of $20,000 – but that, in order to get the public involved, a GoFundMe page has been set up as well.

“The sculpture will cost approximately $20,000,” Wurtzel said. “However, the goal for the GoFundMe is $29,011...we figured that was an appropriate number, and that will help cover the cost of the unveiling ceremony as well. With the GoFundMe we wanted to engage the community in this, and they can donate any amount that they want. In addition, our committee has gone out to the business community to make donations as well.”

Plainview-Old Bethpage Public Library Director Gretchen Browne said that the Chamber’s 9-11 committee had looked throughout the town before deciding that the library, considered an important hub of the community, was the best place for the sculpture. 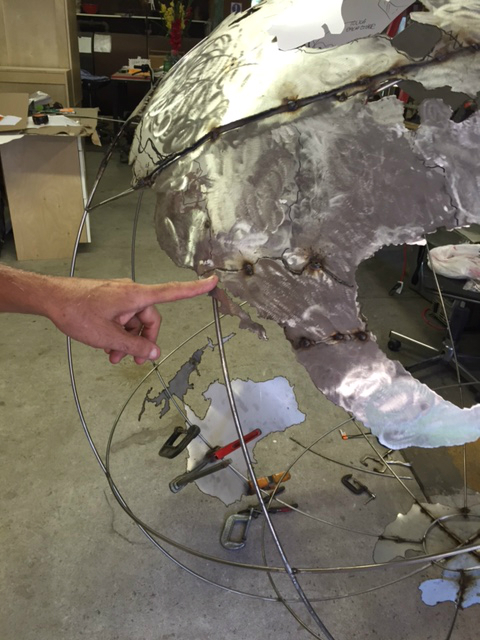 The 9-11 sculpture will consist of two steel towers topped off by a see-through stainless steel globe erected around an actual piece of World Trade Center steel.

“The library is honored to be the site for this wonderful sculpture,” she said. “This is such a beautiful, central location...you can see it from Old Country Road, and we get so much traffic, so it's kind of a focal point for the community.”

When his cancer treatments effect his ability to work, Haussler engages the assistance of Anthony Ingoglia of East Northport, a fellow sculptor that he had trained himself; he notes that Ingoglia’s help is invaluable and represents a powerful union of two artists working together with a common goal.

When he's not toiling away on the sculpture, Haussler works with Sloan Kettering Hospital as well as trying out experimental treatments in Philadelphia. He's extremely positive, extremely driven, said having an important project such as this to finish – possibly his final one ever, unfortunately – gives him a reason to get out of bed every morning.

“This was a satisfying project to work on for sure, because it comes at a time where this could be my last commission ever,” he said. “I did look at it from that point of view, and I will see this thing through to the end. This is important.”