Touching ceremony reflects on the legacy of our fallen heroes and those who have since taken ill; Comedian and First Responder activist Jon Stewart attends 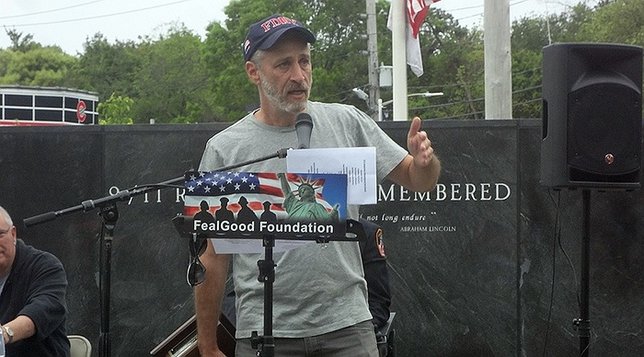 Despite being fifteen years removed from the September 11th, 2001 terrorist attacks upon America, the physical and emotional wounds for all touched by that fateful day in many ways still run just as deeply now as they did when they were first inflicted.

The 9/11 Responders Remembered Park in Nesconset was dedicated on September 10th 2011; according to Park President Martin Aponte, the acre-large square – which includes a wall inscribed both with the names of those that lost their lives on 9/11, as well as the heroes who have since succumbed to Ground Zero-related illnesses. The park is one-of-a-kind in the United States.

On May 21st, the park hosted its 2016 Reading of the Names Ceremony, an annual event  which drew hundreds of First Responder families, firefighters, members of law enforcement, and their supporters, all looking to keep the memories of the sacrifices of their loved ones alive. 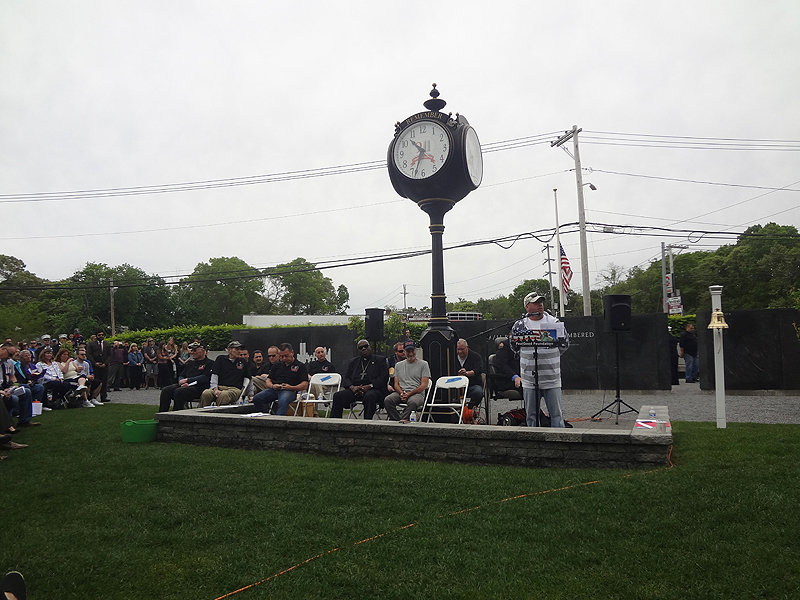 The touching ceremony drew hundreds of families, firefighters, members of law enforcement, and their supporters.

“Unfortunately, we have two ceremonies each year – one on or about this time in May – around Memorial Day, and we have one in September – on or about September 11th as well,” Aponte said.

“Typically, we put over 50 names or more on the wall each year, and unfortunately these are people who have died shamelessly of 911 related illnesses cancers, and diseases.”

The ceremony took place at 10 AM on a grey, overcast day; each seat in the audience adorned with a program and a packet of tissues. Overhead, the shadow of a massive American flag covered the park, suspended between the buckets of two fire engines parked on the neighboring street.

Speakers spoke, singers sang, the Nassau County Drum and Pipe Band played, and collectively, all present paid tribute to those who gave their all on September 11th, as well as those who continue to do so to this day. 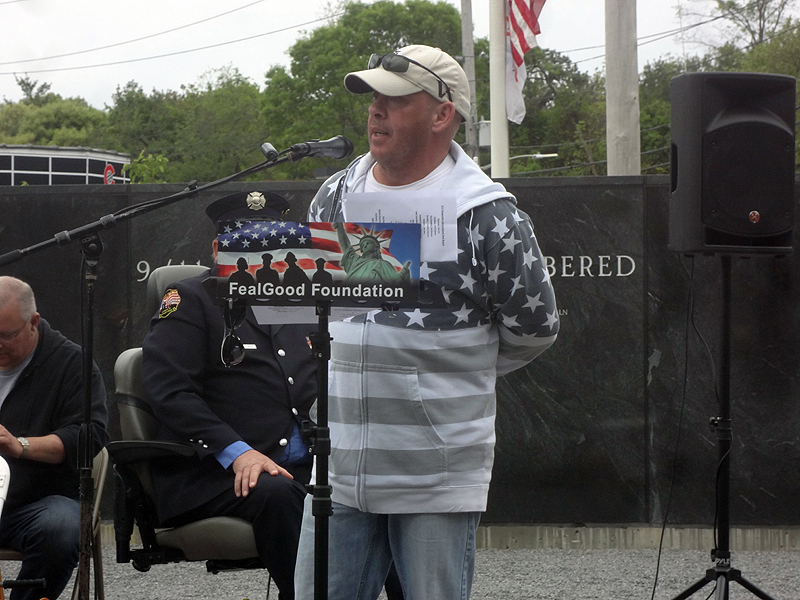 John Feal, a 9/11 responder and the President of the FealGood Foundation.

John Feal, a 9/11 responder who was injured the day after the attacks during a clean-up operation, is an activist for First Responders and the President of the FealGood Foundation, an organization that advocates for firefighters, police, and emergency personnel.

Feal – along with well-known comedian and media critic Jon Stewart – were instrumental in having Federal legislation passed to provide funding for the long-term health care of 9/11 responders. Mr. Feal spoke at the ceremony of the bravery of those men and women who selflessly gave their lives on September 11th, as well as those who continue to suffer.

”This park was built for one reason – not to be the first of its kind, or the best, but to serve the 9/11 Community with grace, dignity, and humility. It is my sincere hope that this park will help tell the stories of our nation's greatest resources its citizens – both uniformed and un-uniformed – who elevated beyond the call of duty to help restore humanity to a fractured city and a grieving nation that was hurting for answers and closure from that horrific Tuesday morning.” 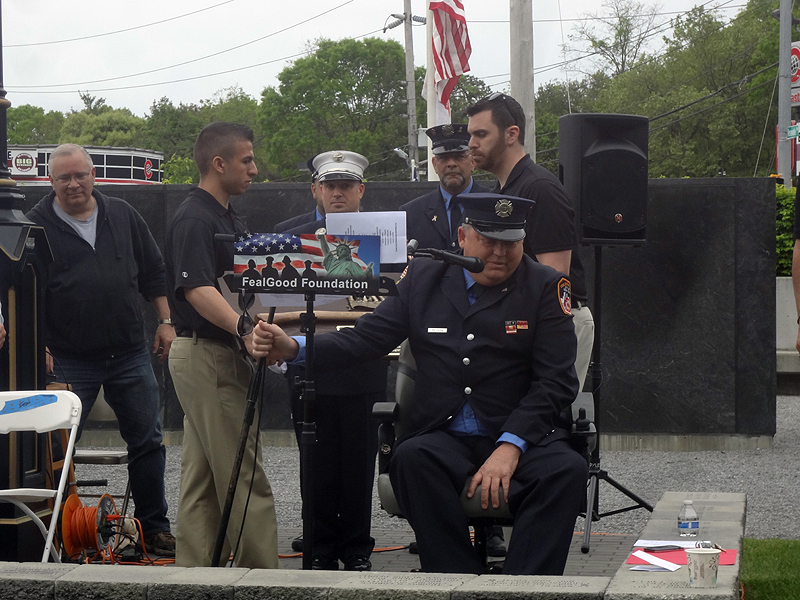 Raymond Pfeifer, a retired firefighter who is currently fighting stage 4 cancer due to his exposure to the toxic environment of Ground Zero.

Raymond Pfeifer, a retired firefighter who is currently fighting Stage 4 Cancer due to his exposure to the toxic environment of Ground Zero, was honored with a United States Flag and a plaque for his tireless efforts in support of funding for the continued health care of his fellow First Responders.

“Today's a good day. It's sad, but nobody gets out alive, so you've got to remember that,” he said to attendees while seated in a motorized wheelchair.

“But anytime you can tell the story about Marcy, or Joe, or my good friend Greg, you get to tell their stories, that's a good thing...you've got to understand, it's a good thing to talk about people who went through bad things to help others.”

In addition to many passionate speakers, the ceremony was punctuated by singer Caitlin Bernie and guitarist JD Leonard, as well as the laying of a wreath in front of the park’s Wall of Names by Suffolk County Comptroller John Kennedy and Legislator Leslie Kennedy. 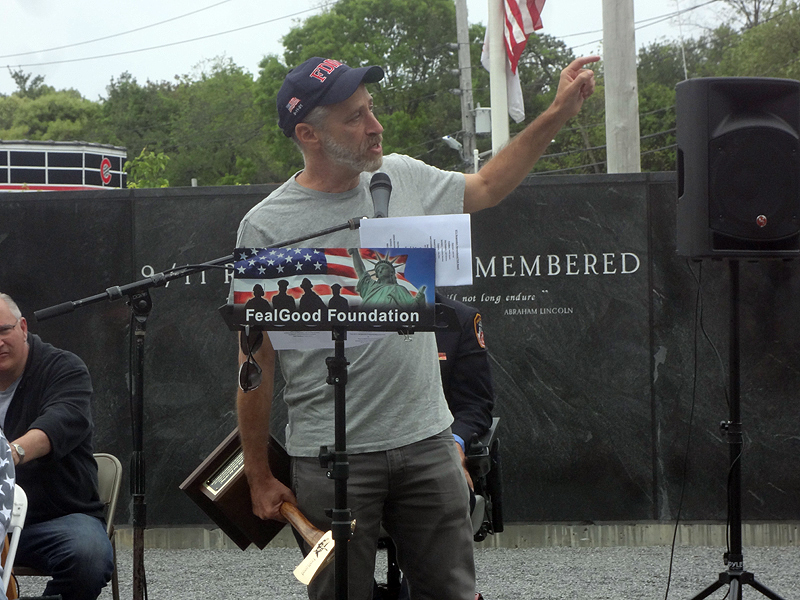 Jon Stewart, recently-retired host of Comedy Central’s The Daily Show, has made headlines in recent years for his dedication to the cause of First Responders; an activist allied with John Feal and his FealGood Foundation, Stewart has gone many times to Washington DC to speak in favor of several bills for the Victim's Compensation Fund as well as the Zadroga Act.

At the ceremony, Stewart was given the honor of reading aloud the names of each of the fallen upon the park’s wall, with each name accompanied by the symbolic chime of a bell. Afterwards, Stewart was presented with an award from the grateful responders whose cause he has so passionately championed.

“I'm always humbled when I'm in the company of Ray and John, and all the other responders and I'm always humbled when I meet a family member or somebody will say thank you to me, and I just wanted to let you know that you don't ever have to thank me for anything because I can never in my life repay the debt that you all gave not just to me, but to the city and to the country. We owe you. And we will continue to owe you forever,” Stewart said. 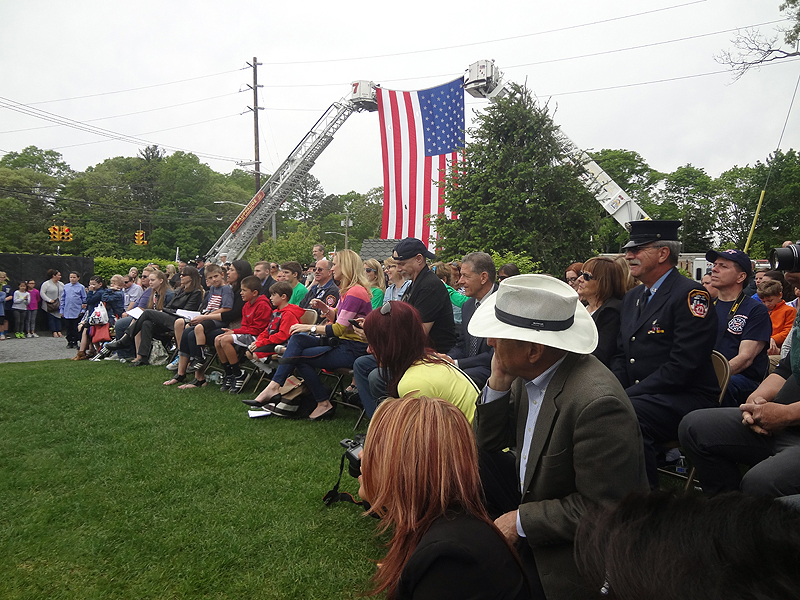 The touching ceremony drew hundreds of families, firefighters, members of law enforcement, and their supporters.

Suffolk County Executive Steve Bellone was also in attendance at the 9/11 Ceremony, and noted that every citizen of the country owes our emergency responders a deep debt of gratitude and assistance that can perhaps never be truly repaid.

“Every time you come to one of these ceremonies, and we’re adding more names to the wall, it's just a reminder that all of us have a solemn obligation to the men and women who responded and our nation's time of need,” he said.

“Men and women who went to that pile and put themselves In harm's way, and have paid dearly and sacrificed everything. It's our obligation to make sure that we're honoring and remembering them and that we're delivering the things that they need for them in their families for what they've done for our country.”