Zeldin: "The 106th Rescue Wing is based out of Gabreski Airport in Westhampton Beach, and has a long and distinguished history of service." 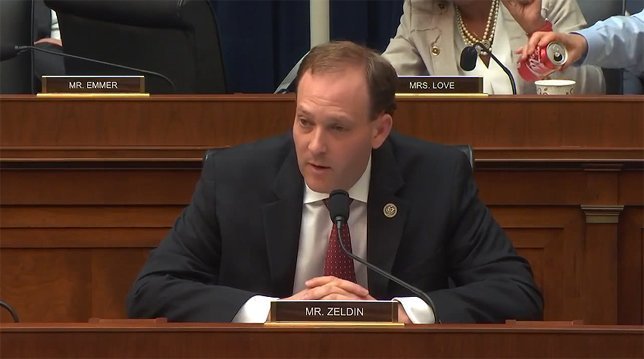 New York, NY - July 20, 2017 - On Wednesday, July 19, 2017, Congressman Lee Zeldin (R, NY-1) delivered a speech on the floor of the U.S. House of Representatives, recognizing the 106th Rescue Wing, New York Air National Guard. Based out of Gabreski Airport in Westhampton Beach, NY, the 106th Rescue Wing has a long and distinguished history of service, and took part in a rescue mission in April 2017 after an explosion occurred on a Slovenian cargo ship. The 106th Rescue Wing was called into immediate action and provided advanced medical care for the next two days, saving the lives of two crew members who suffered severe burns. Congressman Zeldin said:
“Commanded by Colonel Michael Bank, the 106th Rescue Wing is based out of Gabreski Airport in Westhampton Beach, located in my home district, and has a long and distinguished history of service. In October 1991, during the storm that was depicted in the major motion picture, “The Perfect Storm”, an HH-60 and tanker from the 106th Rescue Wing flew to an endangered sailboat about 250 miles south of its base. After survival gear was dropped onto the vessel, they began their return to base. However, braving incredibly severe weather conditions, the HH-60 was forced to ditch 60 miles south of base in the Atlantic Ocean. All but one member of the crew was rescued by the United States Coast Guard cutter Tamaroa. In addition, in 1998, the 106th Rescue Wing carried out the longest over-water rescue mission in an HH-60. Members of the wing were also on scene at Ground Zero during the 9/11 Terror Attacks.
Most recently, this past April, the heroic members of this squadron saved several lives when an explosion occurred on a Slovenian cargo ship. These brave Airmen took immediate action when called upon to offer desperately needed medical assistance. On April 24, the cargo ship Tamar was rocked by an explosion in the forward bulkhead, which resulted in the immediate death of one individual, and severe burns for three other crew members, one of whom sadly perished prior to the team's arrival. 1300 miles off the coast of Cape Cod at the time of the explosion and holding a crew of over 20 men, the situation looked dire for the injured members of this crew. Boston Rescue Coordination Center was initially contacted for help, who reached out to two Canadian vessels in the area. However, these ships were 12 to 24 hours away at the very least, and did not possess the necessary medical capability. It was then that the 106th Rescue Wing was called into immediate action to save those lives aboard the vessel. Less than two hours after the request was made by the Coast Guard, this seven member crew, led by Major Sean Boughal, boarded a C-130 Hercules aircraft from the 102nd Rescue Squadron, also part of the 106th Rescue Wing, to begin the search and rescue. Following a five hour flight and superb airmanship of the C-130 crew, the seven man PJ Team executed a complex night parachute insertion of equipment and personnel into the water and then made their way to the stricken vessel. After making it onboard, the 103rd Rescue Squadron PJ Team provided advanced medical care for the next two days, until a Portuguese rescue helicopter could hoist off the team and airlift the injured seamen to a higher level of medical care. If not for the brave actions of this Rescue Wing, there could have very well been an even greater loss of life upon that vessel.
Mr. Speaker, these Pararescuemen risked life and limb to save these crew members, and have more than earned our respect and admiration. Today, I would like to honor Major Edward Boughal, Technical Sgt Jordan St Clair, Major Marty Viera, Senior Master Sgt Erik Blom, Master Sgt Jed Smith, Staff Sgt Bryan Dalere, and Senior Airman Michael Hartman, for their lifesaving efforts on April 24. Not only today, but everyday, men and women like those in the 106th Rescue Wing put themselves on the line to protect us, our families, and our communities. It is so important that we continue to give our support to our nation’s defenders and provide every needed resource for these heroes. All Americans should be very proud of the 106th Rescue Wing and their continued legacy of remarkably answering the call to duty.”