Two dogs raised on a military base in Afghanistan have been brought to the US. 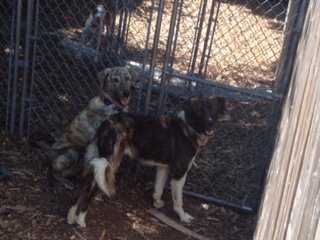 Smithtown, NY - July 16, 2014 - According to the International Security Assistance Force, the United States has approximately 32,800 troops in Afghanistan. While our troops are overseas, thousands bond with the dogs living around them and are broken-hearted to leave them behind when their tour ends. Guardians of Rescue, a nation-wide animal rescue organization, stepped up to secure safety and transportation along with animal rescue organization Nowzad to transport the pups from Afghanistan to the United States. Now, on Wednesday, July 23, 2014, the two dogs will finally be reunited with the sergeant that saved them in Raleigh, North Carolina.
"When we got there, we saw a few Afghanis standing around something and firing at the ground,” states an elite special forces sergeant, whose name cannot be revealed. “We could see an adult dog and figured that they were shooting the dog over and over again. When we got closer, we saw that the situation wasn’t what we expected. The corpse of a dog on the ground had a litter of puppies no more than a week old and they weren’t just shooting the mother but also shooting the pups."
The Elite Special Forces team quickly intervened and took the two surviving puppies, naming them Rommel and Blitz.  The two tiny orphans were hand-raised by the team and grew up on the base camp and became comrades, protectors and loyal companions.
Sadly, the time had come when the team had to return to the United States and Rommel and Blitz had to be left behind in Afghanistan. In addition, Rommel was recently hit by a contractor’s truck and suffered a broken leg.  With no veterinary attention, he limped around camp for months. Without the United States troops’ protection, the dogs lived in heightened danger from enemy forces. Time was of the essence and that is when the team reached out to Guardians of Rescue.
Together with the animal organization Nowzad in Kabul arranging transportation, and Rachael’s Rescue in North Carolina raising money, an effort get the dogs to safety and raise $10,000 to transport them to New York began. Once safe with Nowzad, Rommel received much-needed surgery to save his shattered leg.
"This is part of our No Buddy Left Behind Program", stated Robert Misseri, founder and president of Guardians of Rescue. "Raising that kind of money isn't easy, but helping our heroes and their four-legged battle buddies is the least we can do. After all, they sacrifice their lives for our freedom on a daily basis."
Within 5 weeks, Guardians of Rescue raised the funds to bring Rommel and Blitz to America. The organization still needs donations to cover the cost of transportation and medical expenses, but for now the dogs will finish the last and most important part of their journey...reuniting with their heroes in North Carolina on Wednesday, July 23, 2014.
To learn more, or to make a donation to support the Guardians of Rescue, log onto guardiansofrescue.org.
About Guardians of Rescue
Based in New York, Guardians of Rescue is an organization whose mission is to protect the well being of all animals. They provide aid to animals in distress, including facilitating foster programs, rehabilitation, assisting other rescue groups, and providing support to families, both military and not, who need assistance due to economic factors.