At Governor's Direction, Stepped Up Security from National Guard, State Police, Port Authority and MTA at all Major Transit Hubs Downstate Including JFK, LaGuardia, and Penn and Grand Central Stations. 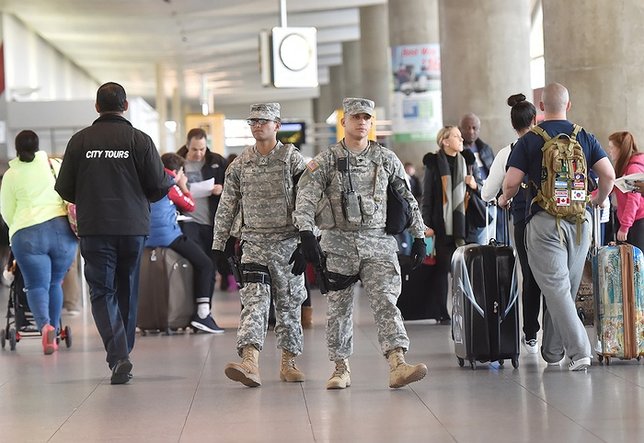 Albany, NY - March 22nd, 2016 - At Governor's Direction, Stepped Up Security from National Guard, State Police, Port Authority and MTA at all Major Transit Hubs Downstate Including JFK, LaGuardia, and Penn and Grand Central Stations.
"The senseless attacks that struck the people of Belgium earlier today have left us all stunned and heartbroken. These were acts of pure evil that have claimed the lives of people who were doing nothing more than going about their days.
My heart grieves for all those who have been impacted, and as we learn more about these attacks, New York will continue to stand shoulder to shoulder with the international community against terrorism – as the world has done for us in the past. And as we have seen time and again, when we are united, terror has never prevailed and never will. On behalf of all New Yorkers, I offer my thoughts and prayers to the people of Belgium on this tragic day."
"I have directed state law enforcement officials to step up security at high-profile locations around the state, including our airports, bridges, tunnels and mass transit systems.
Public safety is paramount, and I want the people of this state to know that we are working with all local and federal partners, remaining vigilant and taking all necessary measures to keep New Yorkers safe."
While there is no known credible threat to New York State at this time, and the federal threat level has not been elevated by the U.S. Department of Homeland Security, the following actions are being taken out of an abundance of caution to ensure the public's safety: