The Nets saw their lead disappear in the final seconds of both halves on Monday night. 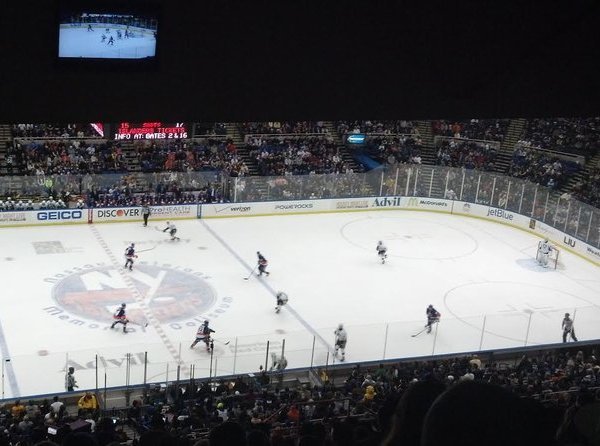 Islanders Drop Three Straight
St. Louis was enjoying its stay in New York after defeating the Rangers last Thursday, but the team found itself trailing in the first period of Saturday’s match against the Islanders when Thomas Vanek snapped in the first goal of the night. Kyle Okposo made it 2-0 in New York’s favor with five minutes left in the opening period, however Vladimir Tarasenko cut the spread right back down to 1 two minutes later.

Tarasenko tied the game with a wrist shot 1:17 into the second only to see Matt Martin take the lead back for NY on a snap shot 2:41 later. The 3-2 spread looked like it would hold up through the rest of the game, but with only 27 seconds left in the third T.J. Oshie tied things up at 3 apiece.

A scoreless overtime period was followed by a shootout in which only Vanek could score for New York, and the Blues found the back of the net twice to take the OT victory. Kevin Poulin stopped 32 of 35 shots before the shootout.

The Islanders went on to host the Bruins last night, and though they allowed Boston to score first a Frans Nielsen wrist shot tied the it with 4:31 to go in the opening period. Brad Marchand snapped in the go-ahead for Boston 4:50 through the second, but Michael Grabner knocked in the tying goal a few minutes later. Reilly Smith put the Bruins on top again soon afterward, and again the Islanders were able to tie—this time on an Okposo wrist shot with a Grabner assist.

Boston was finally able to find a lasting lead when Carl Soderberg landed a wrist shot of his own to make it 4-3 with 33 seconds left in the second. The Bruins added two more goals in the third, and took a 6-3 victory. Evgeni Nabokov stopped the only shot that came his way after he came on to replace Poulin for the last 12 minutes of the game; Poulin stopped 30 of 36 before being pulled.

Now on a three game losing streak, the Islanders will face the last team they beat—the New York Rangers—at Yankee stadium on Wednesday at 7:00 PM for the first of a two game set.

Rangers Win in Yankee Stadium
The Rangers were in New York when they played the Devils on Sunday, but they weren’t quite at home. Playing out in the open air of Yankee Stadium, New York found itself trailing early as Patrik Elias knocked in the first goal of the afternoon 5:36 into the game.

Dominic Moore tied the score a few minute later, but Elias scored on a power play two minutes after that to give New Jersey back the lead. A Travis Zajac shot with under four minutes to go in the first put the Devils ahead 3-1, however, Marc Staal cut the deficit back down to one less than a minute later with an assist from Moore.

Mats Zuccarello tipped in the tying goal 2:48 through the second, then put the Rangers ahead 10 minutes later. Carl Hagelin scored 13:53 through the period, and Rick Nash made it 6-3 with a wrist shot in the last 30 seconds of the frame.

Derek Stepan cemented the Ranger victory on a penalty shot midway through the third, giving New York an eventual 7-3 win. Henrik Lundqvist blocked 19 of 22 shots on the day.

The Rangers will return to Yankee Stadium tomorrow at 7:00 PM to play the Islanders, before going home to MSG for another match against their New York rivals on Friday.

Raptors Steal One from Nets
Paul Pierce and Kevin Garnett returned to the TD Garden on Sunday for the first time since being traded to the Nets. Both men scored just 6 points, but they were warmly greeted by what was once their home crowd, and were still a factor in what was largely a low-scoring, sloppy affair.

Offensive production in the second half improved only marginally, but the Nets hung on to win by a final of 85-79. Both teams shot under 40% from the field, and close to 25% from beyond the arc.

Andray Blatche led Brooklyn with 17 points, followed by Alan Anderson and Andrei Kirilenko who both posted 11.

Now on a 5 game winning streak, and having won 10 of 11 games played in the month of January, the Nets hosted the one team that has managed to defeat them in 2014 for a rematch last night. Toronto shot out to an early 6-0 lead on a pair of threes and was up by 10 late in the first quarter, but Deron Williams and Andray Blatche led a 13-2 run to close out the quarter up 26-25.

The second quarter proved just as evenly matched, and the Raptors were up 54-51 with 45 seconds to go; Joe Johnson hit a bank shot to cut the deficit down to 1 and Anderson put the Nets up by 2 with a three in the last 1.3 seconds. Brooklyn looked to be going into halftime on top, but a shot from beyond half court by Kyle Lowry sent Toronto ahead 57-56.

The Raptors still led by a point after the third, however, the Nets were able to take control late in the fourth and were ahead 103-100 with 17 seconds to play after a pair of Pierce free throws. Toronto settled for a two pointer with 12 seconds left to play, handing the Nets an all-but certain victory. Unfortunately, Deron Williams had his pass stolen by Patrick Patterson on the inbound, who in turn sunk a jump shot with six seconds left. Out of timeouts, the Nets tried to cross the court and left Paul Pierce to put up a desperation-three. He missed, and the Raptors won 104-103.

Knicks Top Lakers
After the Knicks pummeled the Bobcats in a blowout highlighted by Carmelo Anthony’s record-breaking 62 point performance, they moved on to the Lakers for a much more competitive game. New York led LA 22-16 late in the first quarter, but LA went on a 9-0 tear to close out the frame with a three point lead.

The Knicks found themselves playing catch-up through most of the second period, however, they were never far behind and Anthony put up 6 points in the last 90 seconds to give them a 51-47 advantage at the half. Melo extended the New York lead by 3 to start the third, but the night remained a tug of war between LA and NY.

New York was ahead by just two points with five minutes to play in the fourth when Anthony sparked an 11-6 run to close out the game and hang on to win 110-103.

Anthony had a game high 35 points in the win, backed up by Raymond Felton’s 20. Tim Hardaway Jr. put up 18, JR Smith scored 16, and Tyson Chandler posted a double-double with 13 points and 14 rebounds.

The Knicks will host the Celtics next, at 7:30 PM tonight.