Print Email
On Saturday afternoon, members of the Brentwood community gathered at the Brentwood Fire Department headquarters to pay tribute to Rah-Quan Palmer, the 18-month old victim of a residential house explosion that occurred on Aug. 14.  17 others were injured in the event in which two 200-gallon propane tanks installed outside the home without permit fueled a catastrophic explosion that completely destroyed the home, and damaged surrounding homes that were subsequently condemned.
The homeowner, Marcel Richards, 62, of Brooklyn, had been fined for multiple housing violations in the past decade for restructuring a one family home into multiple family units without building permits from the Town of Islip.  Between Mr. Richards and his wife, the Town of Islip has issued 22 violations for a number of illegal additions, including a bathroom in the cellar and a lacking smoke detector.  Mrs. Richards paid about $1200 in fines for the 12 violations issued against her. 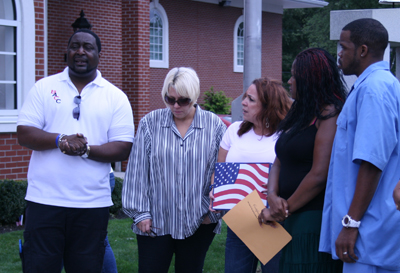 On behalf of U.S. Representative Steve Israel (D-New York), the Palmers and their family received a flag that had flown over the Capitol building in Washington, D.C.  In response to the tragedy, community members and representatives of local organizations have joined forces to draft new legislation that improves home inspections, making it safer for residents and first responders.
Deborah Kirnon, a Brentwood resident who had known the Palmers before the tragic event, is determined to prevent this from happening again.  Kirnon is spearheading a local initiative to set up 1-800 number for residents to anonymously report housing violations.  “We need to band together to make these kids safe and keep first responders safe.  It’s not right,” Kirnon said, referring to the false walls constructed within the home at 12 Prospect Drive that made it difficult and dangerous for firefighters responding to incident.
In addition to the toll-free hotline, Kirnon is hoping to use LIPA records to find energy spikes that might indicate multi-family units in single-family homes.  Kirnon’s group is called the Community Safety Iniative, and so far the group has the support of the Brentwood Association of Concerned Citizens, LEEP, Clean Streets as well as the Brentwood and East Brentwood Fire Departments and local political leaders, including Steve Israel and Assemblyman Phil Ramos.
“It’s inspiring to see community leaders come together in this instance to help this family and turn this into something positive by advocating for a change in the laws,” said Assemblyman Phil Ramos (D), who attended the event.  “Legislation is needed that strikes a balance between housing needs and economic needs of families.  If legislation is introduced to create user-friendly procedures to reassess apartments, it would allow the town to make sure housing is safe.”
Share your thoughts on this article by posting a comment below or visiting our Long Island Living discussion forum.