Anthony broke a Knicks’ and a Madison Square Garden record with an amazing 62 points against the Bobcats. 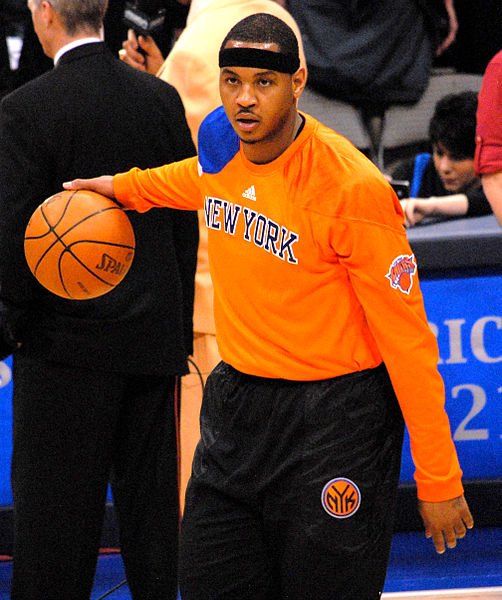 Carmelo Anthony Breaks Knicks’, MSG Scoring Record
The Knicks started 2014 on their hottest streak of the season, winning five games in a row and six of their first seven, but that trend was swiftly sent in reverse when they suffered a 108-98 loss at the hands of the Bobcats last Tuesday. After that, New York went on to lose by ten or more points to the Pacers, Clippers, and Nets.

The team found itself in hot water again on Wednesday when the Knicks had fallen behind the 76ers by 10 late in the first quarter, but they cut the deficit down to 7 before the second and were within 5 going into halftime. New York even took a 1 point lead early in the third, going ahead 68-67 on an Iman Shumpert three, and kicked the final quarter off with a 10-0 run to go ahead 90-84, but they could not hang on to the lead and ultimately fell 110-106.

Carmelo Anthony, who scored only one point in the first quarter, led the team with 28 points and 7 assists. Andrea Bargnani scored 20, Shumpert put up 19, JR Smith scored 14, and Tyson Chandler posted a double-double on 10 points and 14 rebounds.

That loss was the fifth straight for the Knicks, and their third on the front end of an eight-game home stand. Not wanting to have to play from behind again last night, or to have another 1-point first quarter, Carmelo Anthony quickly put up 8 points on three shots as New York took an early 12-4 lead against the same Bobcats team that started their current cold streak.

Melo put up 20 points by himself in the first quarter, doing most of the heavy lifting as the Knicks led Charlotte 30-21 going into the second. Carmelo stayed just as hot, putting up another 17 to send his team into the half up 67-46. The last 3 of those points came on a stunning shot as Melo leaped over half-court with a second left to play and sunk an amazing buzzer beater.

After the break, Anthony scored the first 12 New York points of the thirs as the spread was extended to 25, and got himself to 51 points with just under four minutes left in the quarter, passing his previous career high of 50. Melo was not done yet, however; he put up five more points in the third, then landed four foul shots in a row in the final quarter to bring his total up to 60 for the night.

With 7:23 left to play, Anthony launched a jumper and watched as it banked in to give himself 62 points on the night. He was finally subbed out of the game after that shot, but only after breaking Bernard King’s Knicks record of 60 points set against the New Jersey Nets on Christmas Day in 1984, and one-upping Kobe Bryant’s Madison Square Garden record 61 points set in 2009.

Anthony’s 62 points came on 23-35 from the field, 6-11 from beyond the arc, and a perfect 10-10 from the free throw line. He also grabbed 13 rebounds to add another double-double to his name on the record-breaking night.

The Knicks beat the Bobcats by a final of 125-96 after Carmelo left the game. JR Smith contributed 14 points to the win, Raymond Felton scored 11, and Tim Hardaway Jr. put up 10.

New York will try to ride Melo’s momentum back into playoff position, starting with a 3:30 PM game against the Lakers tomorrow afternoon.

Nets Win 4 Straight
While the Knicks are hoping that Anthony’s record performance will provide them a much needed spark, the Nets have kept their New Year’s resurgence alive and well. After blowing out the Knicks on Monday, Brooklyn went home to host the Magic on Tuesday.

Orlando had a 13-12 advantage midway through the first quarter, but Paul Pierce and Andray Blatche led the Nets on a 13-4 run which helped them to a 27-21 lead entering the second. The Magic tied the score at 38 apiece four minutes before the half, but Joe Johnson scored the last four points of the quarter to keep Brooklyn up 46-42.

After the break, the Nets completely dominated the Magic with a 27-14 performance in the third quarter. The Magic would score the last 9 points of the game, predominantly on free throws, but that would only be good enough to cut their defeat down to a 101-90 spread.

Blatche had a game-high 18 points in the win, followed by Mirza Teletovic with 14. Pierce and Johnson both shot for 13, and Deron Williams scored 9 points to go with 9 assists.

After another lopsided victory, the Nets went on to host the Mavericks last night. Dallas fared better than had Orlando, as the Mavs kept pace with the Nets and had a 21-18 advantage at the end of the first quarter, but the second would prove their undoing.

Teletovic shot 3 threes to help Brooklyn take a 29-26 lead early in the second and kept rolling from there, scoring 22 points in the quarter. 6 Teletovic three-balls helped the Nets go ahead 57-46 at the half.

The Mavs were able to shave three points off the spread in the third, and made it a tight game in the fourth. Though Brooklyn pulled away each time, Dallas was able to cut back within three or four points several times in the fourth quarter, and ended the game down by just a point. Dallas could never quite catch Brooklyn, however, and lost 107-106.

Teletovic had a game-high 34 points in the win, backed up by Deron Williams’ 18 points and 11 assists. Pierce shot for 12, and Kevin Garnett gave the Nets their second double-double of the night with 10 points and 11 rebounds.

The Nets have now won four straight games and have taken nine out of ten in the month of January. They will try to extend their win streak to five when they head to Boston at 6:30 PM tomorrow night.

Islanders vs. Rangers
The Rangers entered Tuesday’s game against the Islanders in second place in the Metropolitan division, while their New York rivals were still in dead last. Those positions looked perfectly appropriate early on, as Rick Nash knocked in the first goal of the night just 62 seconds into the game, then put the Rangers up 2-0 10 minutes later.

Matt Martin cut the spread down to 1 with a snapshot before the end of the first, but Chris Kreider had the Rangers ahead 3-1 on a tip-in during a power play halfway through the second period. That lead did not last much longer, however, as Thomas Hickey found the back of the net with a wrist shot four minutes later and Colin McDonald tied the score 3-3 three minutes after that.

Thomas Vanek gave the Islanders their first lead 15:22 through the third period during a power play, and Frans Nielsen put the game away with an empty netter in the last 7 seconds.

Islanders Fall to Penguins
Hot off two straight wins, the Islanders got out to an early lead against the Penguins on Thursday. Michael Grabner scored the first goal with a Thomas Hickey assist 1:39 into the game, and Brock Nelson snapped in the second goal with a Grabner assist 7 minutes later. Pittsburgh cut into the lead just over a minute after that, however, and Sidney Crosby wrapped around to tie the game at 2 apiece midway through the first.

The Penguins went ahead on an Olli Maatta backhander early in the second period, and doubled up on the lead during a power play later in the frame. Josh Bailey cut the deficit back down to 1 with a wrist shot 3:10 into the third, but Evgeni Malkin put the Penguins ahead 5-3 a few minutes later.

Kyle Okposo’s wrist shot with 10:05 left to play would prove the last Islander goal, and Brandon Sutter gave Pittsburgh a 6-4 win with an empty netter in the last four seconds. Poulin stopped 23 of 28 shots in the loss.

The Islanders will play the Blues next, at 1:00 PM today.

Rangers Lose to Blues
The Blues were already in town before their match with the Islanders to play the Rangers on Thursday. St. Louis went ahead on a Alexander Steen tip-in 8:38 into the game, and that lead held for nearly half an hour.

Rick Nash tied the score with a snap shot 18:17 through the second period, but Kevin Shattenkirk put the Blues back on top 2-1 early in the third. Henrik Lundqvist stopped 23 of 25 shots as the Rangers went on to lose by a goal.

The Rangers will play the Devils next, at 12:30 PM tomorrow afternoon in Yankee stadium.