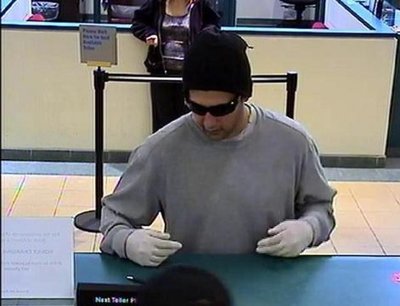 An allegedly armed man walked into a Bank of America branch in West Babylon at 1:30 p.m. on Monday. He handed a note to a teller saying he was armed. The teller complied and gave him an undisclosed amount, and he fled in an unknown direction. There were no shots fired, and no one was injured during the incident.

Suffolk County Police are currently investigating the crime, and say the suspect is a white male, about 6 feet tall and between 25 and 35 years old. He was wearing sunglasses, a black wool hat, blue jeans, a gray sweatshirt and gloves during the crime. Security cameras caught this picture of the man during the robbery.

Anyone with information on the crime is asked to call 1-800-220-TIPS. All calls will be kept anonymous.

A 28-year-old man from Brentwood was killed in a motorcycle accident at 7:05 on Monday evening in North Babylon. Yannis F. Valencia was heading east on Sunrise Highway when he hit the rear of truck and was thrown from his motorcycle. Valencia was then run over by another vehicle that did not stop.

Valencia was taken to Good Samaritan Hospital in West Islip where he was pronounced dead. The driver of the flatbed truck - 54-year-old Ricardo Carter - was not injured. Police ran a safety inspection on the truck at the scene of the crime. The motorcycle was also impounded for safety checks.

The vehicle that hit Valencia and then fled is described as a small SUV. Police are investigating the crime, and are asking anyone with information to call 631-854-8152.