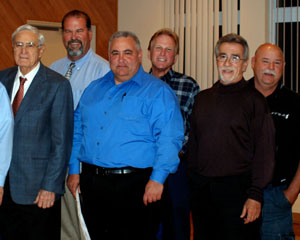 Following the wake of Superstorm Sandy, a full-scale assessment of Long Island's utility resources and their management is still in progress. Though lack of adequate preparation and/or leadership caused failures in nearly every major utility from power, to gas to communications, there were no failures and/or interruption of service among Long Island's 21 commissioner-run water districts.

At a recent Nassau-Suffolk Water Commissioners Association (NSWCA) meeting held in Hicksville, NY, NSCW President Robert McEvoy commented, "I'm proud to announce that we (locally run water districts) were the only major utility on Long Island that did not fail to service during Superstorm Sandy."

This was not by accident. Diligent preparations and plans put in place throughout each of the NSCWA's districts ensure that all consumers have clean, safe water during and after any major crisis situation.

Each district was ready for the storm with practiced emergency planning and protocols in place that were supervised by district water commissioners and superintendents. Crews worked around the clock to ensure that the distribution systems were fully operational, backup diesel powered pumps and generators were tested, and additional fuel supply stocked. During and after the storm, wells were carefully monitored to ensure the delivery of clean and sustainable water throughout each district.

NSWCA represents locally run water districts where the water resource is managed and run by commissioners who live within the district. "As members of the community, our response and main priorities are to address the needs of our community firsthand," stated Gary Brosnan, South Farmingdale Water Commissioner.

Water remains one of Long Island's least expensive utilities with commissioner-run districts diligently working to protect and conserve this resource at an affordable cost. While consolidation continues to threaten the autonomy of locally-run resources, the excellent preparedness and response demonstrated by Long Island's 21 commissioner-run water districts during and after the storm is a testament to the ultimate success that comes from community-based leadership.

The NSWCA is comprised of Water Commissioners from 21 Nassau County and Suffolk County Water Districts. NSWCA is dedicated to communication, efficiency and best practices among Long Island’s water districts. As part of its mission, the Association holds monthly educational meetings sponsoring experts on topics that include law, cost efficiencies, rules and regulations as well as issues germane to water utilities.