Andrew Schreier of Elmont is being accused of impersonating a police officer during a road rage incident. 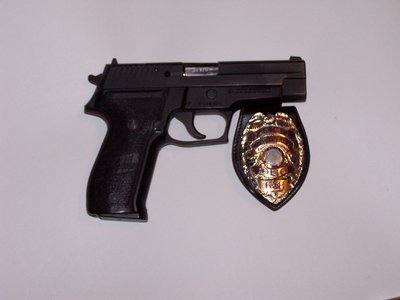 Nassau County police say that 19-year-old Andrew Schreier was arrested on Monday afternoon after impersonating a police officer and threatening to ticket another driver during an escalated road rage dispute.

During the incident, the Elmont teen pulled alongside another vehicle, took out a gold badge and pointed what appeared to be a handgun at the other car. “I’m a cop and I’ll give you tickets,” he yelled at the 29-year-old driver and the 47-year-old passenger. The incident happened on Elmont Road around 3 p.m. on Monday.

The two people in the other car proceeded to call police and follow Schreier onto a dead end street. When Nassau cops arrived they arrested Schreier in the back yard of a home. Officials said that Schreier had a glass bottle in his shoe that contained what they believe to be MDMA, which is a form of the illegal drug Ecstasy.

After searching Schreier’s car, police also found a U.S. Postal Police badge and a black airsoft pellet gun, which they say were both used during his attempt to impersonate a police officer. Cops also said they found a forged Department of Homeland Security ID, a forged New Jersey license and two Federation of Postal Police badges.

After his arraignment at First District Court in Hempstead on Tuesday, Schreier was ordered to be held on $50,000 bail. Howard Schwartz, Schreier’s defense attorney, said that the alleged fake ID cards may have actually been police department courtesy cards.