A Jet victory over the Raiders was one of few bright spots for New York over a weekend in which the Knicks were blown out by 41 points. 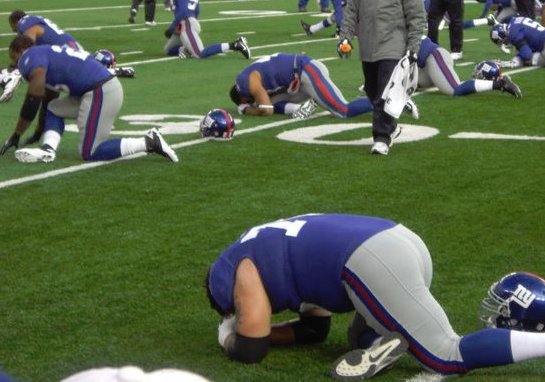 Giants out of Playoff Contention
Despite an 0-6 start to the season the Giants’ hopes to reach the playoffs were, however faint, still very much alive going into San Diego yesterday. The G-Men were even poised to take an early lead against the Chargers, as Eli Manning heaved a 51-yard pass to Hakeem Nicks on the second New York drive of the day, putting his team on the San Diego 32-yard line. On the very next play, however, Manning’s pass bounced off of Reuben Randle and into the hands of the Chargers’ Donald Butler, who returned it to midfield. Philip Rivers through a 43-yard touchdown pass to Keenan Allen, and the Chargers took a 7-0 lead off the interception.

The Giants were unable to get back into scoring position again in the first half, but San Diego put another 17 points on the board in the second quarter, taking a 24-0 lead into halftime.

Big Blue caught a break early in the third quarter when Justin Tuck sacked Rivers, forcing a fumble which Cullen Jenkins recovered at the San Diego 18. A series of short plays ended in Peyton Hillis running the ball in for the first Giant scoring play of the day. Unfortunately, the Chargers came right back with a touchdown of their own to go ahead 31-7, and the G-Men were unable to score again in the quarter.

New York did make its way back into the end zone to start the fourth quarter on a 5-yard pass from Manning, but it was the last successful drive of the game for the Giants. They went on to lose 37-14 and, with a Philadelphia win earlier in the day, fell out of contention for a spot in the playoffs.

Manning went 20/32 for 259 yards with two interceptions and a touchdown. Andre Brown ran for 81 yards and a fumble on 16 carries, and Hakeem Nicks caught for 135 yards on 5 receptions.

The Giants will continue the season with a match against the Seahawks at 1:00 PM on Sunday.

Jets Knock off Raiders
Coming off three straight losses, including two in which the team managed only a field goal apiece, the Jets were in desperate need of a win yesterday. They got off to a good start as Geno Smith connected with Santonio Holmes for 32 yards in the first drive of the day, setting Nick Folk up for a 41-yard field goal and a 3-0 lead to start the game.

When the Jets next got the ball it looked as though poor quarterback play might again be a real sore point for the team; Smith was picked off in New York territory, but the Raiders were unable to do anything with the opportunity and missed their field goal attempt. Geno responded with a 30-yard pass to Kellen Winslow when he returned to the field, then hurled a 25-yarder to Jeremy Kerley for a touchdown.

The Raiders managed to get on the board with their first possession of the second quarter, cutting the deficit down to 10-3 on a 41-yard field goal, and stayed within a TD of the lead until Folk put up another FG with 5 minutes to go in the half. On their next drive Oakland found themselves backed up to their own 18-yard line after a 10-yard penalty. Two incomplete passes later the Raiders were set to kick the ball away, but Antonio Allen blocked the punt and recovered it in the end zone, putting Gang Green ahead 20-3.

Oakland wasted no time trying to get back into the game after halftime. Matt McGloin started the quarter with a 16 yard pass to Streater, then handed the ball off to Marcel Reece who ran it 63 yards for a touchdown to come back within 10.

Geno Smith led his team down the field on the ensuing Jet Drive and ran it the last 8 yards of the way himself for a rushing TD, but McGloin responded with a 48-yard scoring pass, again to Streater, to make it 27-17. The Jets put a little extra distance behind them before the quarter was over, however, courtesy of a 51-yard Folk field goal.

A 15-yard scoring run by Chris Ivory in the fourth quarter provided enough cushion to stave off another Oakland FD and TD. The Jets ultimately won 37-27.

Smith went 16/25 for 219 yards with an interception, a passing touchdown, and a rushing touchdown on 50 yards running. Chris Ivory ran for 76 yards and a TD on 18 carries. Winslow caught for 61 yards on 3 receptions, and Holmes had 55 yards on the 3 catches.

Now 6-7, the Jets are still alive in the wildcard hunt. They will play the Panthers next, at 4:05 PM on Sunday.

Knicks Crumble Under Celtics
The Knicks ended their 9-game losing streak with two 30+ point victories in as many days. Evidently the offensive outburst took its toll on the team, as they looked to still be resting when the Celtics came to MSG yesterday afternoon.

Boston started the game with a 12-0 run before Carmelo Anthony finally knocked in the first Knick point on a foul shot four minutes into the first quarter. The Celtics scored another 5 before Anthony could score the first New York points from the paint, and were ahead 25-3 before he landed a jumper. They ended the first quarter with a 34-11 lead.

Amar’e Stoudemire and Metta World Peace tried to get the Knicks back in the game and were the sole contributors toward a 13-4 run which spanned much of the second quarter, but even within the first half their efforts were too little too late. After the duo was subbed out, Boston took back command of the game and ended the half up 58-31.

The second half went no better, and the Knicks were never able to get into the game. They lost by 41 points, 114-73.

Once again in last place, the Knicks will face the Cavaliers next, tomorrow at 7:00 PM.

Nets top Bucks
Coming off an embarrassing 30-point loss to their crosstown rivals, the Nets needed a win to get back on the right track when they stepped into Milwaukee on Saturday. Led by Brook Lopez, who scored half of their points in the first quarter, the team got off to a strong start and took a 20-18 advantage in the first quarter.

After falling behind 37-33 in the second period, Lopez tied things up again with four consecutive free throws, then put Brooklyn back on top with a layup. Milwaukee’s Gary Neal nailed a three to give the Bucks a 40-39 lead at the half.

Lopez stayed hot after the break, kicking off a 9-3 run late in the third quarter which gave the Nets a lead they would not relinquish. Brooklyn maintained a 10-point spread for most of the fourth quarter, and beat the Bucks 90-82.

Brook Lopez led the team in scoring with 32 points, and was the only Net to shoot over 50%. Joe Johnson backed him up with 15, followed by Alan Anderson with 13 and Andray Blatche with 11.

Now back on top of the Knicks at 6-14, the Nets will have to play the Celtics next at 7:30 PM tomorrow night.

Rangers Drop Two Straight
The Rangers found themselves in a streaky game against the Devils on Saturday night. After Brad Richards snapped in the first goal of the night in the first period, Mats Zuccarello found the back of the net less than a minute through the second.

Cam Janssen put the Devils on the board five minutes after the Zuccarello goal, and the score remained unchanged for nearly a full period before Travis Zajac tied things up with a snap shot. 10 minutes after that, Michael Ryder gave New Jersey their first lead with a wrist shot and the Devils looked ready to win, but with 22 seconds to go Chris Kreider scored on a power play to tie the game at 3 apiece.

Overtime did not last long, as Eric Gelinas scored the winning goal 1:15 through the OT period. Henrik Lundqvist stopped 20 of 24 shots in the 4-3 loss.

The Rangers hoped that Lundqvist would churn out a better performance last night when they hosted the Capitals, who he has shutout in their previous three meetings. A scoreless first period set them on the right track, but Washington got past Lundqvist twice within 25 seconds early in the second period. A Mikhail Grabovski penalty shot before the end of the frame gave the Capitals a 3-0 lead.

Nate Schmidt scored the fourth Washington goal with fewer than three minutes left in the game, and Benoit Pouliot did not tip in the first Ranger goal of the night until there was less than a minute to go. New York lost 4-1 as Lundqvist stopped 32 of 36 shots on goal.

The Rangers will host the Predators next, at 7:30 PM tomorrow night.

Islanders Winless for Three Weeks
The Islanders’ dismal start to the season continues to grow bleaker and bleaker. Coming into Saturday’s match against the Kings, the team had suffered eight straight losses. New York’s defense held together for much of the game, but a dearth of offensive production made Anze Kopitar’s snap shot more than halfway through the second period a go-ahead, putting LA up 1-0.

New York stayed within a point for  nearly a full period’s worth of play, but Dusting Brown put them down by 2 just over 10 minutes through the third. An empty netter in the final two minutes made it 3-0 in the Kings’ favor, and that’s how the game ended.

Kevin Poulin stopped 21 of 23 shots on the night; his teammates mustered only 16 shots on goal over the course of the game.

Now on a 9-game skid, the Islanders will try to prevent their streak from reaching double digits when they play the Ducks at 10:00 PM tonight.