NFL Fans Register as an Earthquake on Monday Night

Sports fans are known for their ability to be loud during big games, but last night they actually shook the ground beneath them. 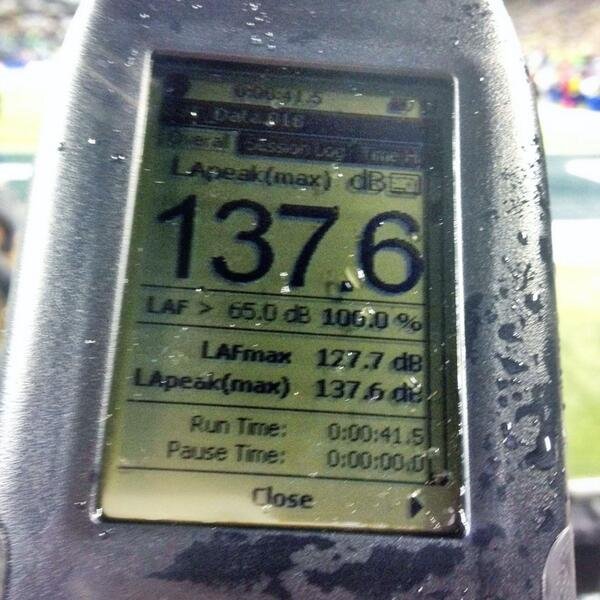 Pro football has cemented itself as America’s favorite sport for some time now, so it’s not much of a surprise when fans get a little loud at NFL games. Last night’s prime time matchup pitted two teams famous for their raucous crowds against one another: the visiting New Orleans Saints, used to playing in their own vociferous dome stadium, and the Seattle Seahawks, who were looking to reestablish their record as the loudest fans on the planet.

Seattle’s “Twelfth Man” accomplished just that early in the game, reaching a Guinness World Record 137.6 decibels during the second quarter as the crowd of 68,387 took the title of world’s loudest fans back from the Kansas City Chiefs, who clamored at just a tenth of a decibel lower in a mid-October matchup with the Raiders.

The Seahawk faithful weren’t just the loudest fans on the planet, however; they actually moved the earth below them as well. When defensive end Cliff Avril sacked Saints’ quarterback Drew Brees and forced a fumble in the first quarter, leading to the first Seattle touchdown of the night, a seismometer located a block away from the stadium picked up unusually high levels of seismic activity.

The magnitude 1-to-2 quake was one of five separate seismic events that registered during the Monday Night Football game. That same device also detected the earth-shaking results of a Marshawn Lynch run against the Saints during the 2010 playoffs.

Seattle’s fans evidently shook more than planet as well, as the normally indomitable New Orleans offense was held to just a single touchdown over the course of the night, suffering a 34-7 loss while the Seahawks improved to an NFL-best 11-1 record.