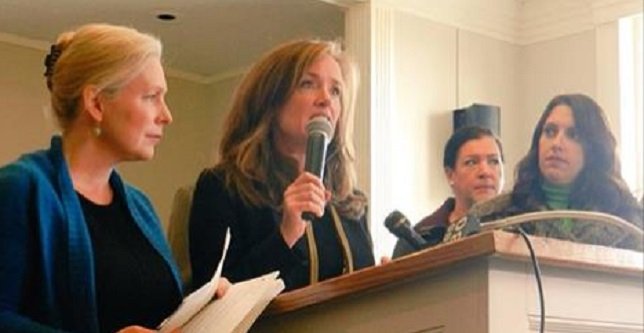 After Superstorm Sandy victims faced burdensome and fraudulent insurance claims processes, there is now the push for new legislation to protect homeowners in future storms.

Babylon, NY - November 30, 2015 - After Superstorm Sandy victims faced an extensive, burdensome and fraud-ridden flood insurance claims process, U.S. Senator Kirsten Gillibrand and U.S. Representative Kathleen rice today announced their push for new bipartisan legislation to require more transparency and accountability from the Federal Emergency Management Agency (FEMA) so that home and property owners who carry flood insurance policies are better protected in the event of another storm. Gillibrand and Rice also renewed their push for FEMA to expedite its review of insurance claims – a process that began only after the revelation that insurance companies underpaid potentially thousands of claims.

“Over three years after superstorm Sandy tore through New York, communities are still rebuilding and families are still fighting to put their lives back together,” said Senator Gillibrand. “It is unacceptable that some New Yorkers were forced to face a burdensome and fraud-ridden flood insurance claims process. We need to reform the system and require more transparency to hold FEMA accountable so that homeowners are protected when the next storm hits. This new bipartisan legislation would create unprecedented oversight over FEMA and hold them accountable so that New Yorkers never again have to face the endless red tape and fraud-ridden claims process they have been forced to endure over the last three years since SuperStorm Sandy.”

“For too many Sandy victims on Long Island, the last three years have been a bureaucratic nightmare,” said Representative Kathleen Rice. “Legitimate claims were denied or underpaid because of fraudulent engineering reports, and homeowners who paid for flood insurance were left feeling cheated by a program that they trusted to be there when they needed it most.  We have to do whatever it takes to restore that trust, and this bipartisan legislation is a critical first step that will reform the National Flood Insurance Program to make it more transparent, more accountable, and more focused on victims’ needs. Passing this bill will help ensure that victims get the support and funding they need to fully recover from natural disasters, and I’ll keep working with Senator Gillibrand and our fellow cosponsors to get it to the President’s desk.”

“Superstorm Sandy devastated hundreds of homes in the Town of Babylon and far too many families are still struggling to recover today,” said Babylon Town Supervisor Rich Schaffer. “I thank Senator Gillibrand not only for this new legislation that will reform and improve FEMA and the claims process, but for her tireless advocacy on behalf of Sandy victims throughout this ordeal.  I stand with her in saying that we must ensure both that these families receive the assistance they need, and that FEMA improves this arduous process for future storms.”

“Senator Gillibrand’s Flood Insurance Transparency and Accountability Act of 2015 is a crucial step forward for all those homeowners who were defrauded following Superstorm Sandy, as well as those homeowners who are future potential victims of a flooding event,” said Melissa H. Luckman, Practitioner in Residence of the Touro Law Center's Disaster Relief Clinic. “Homeowners faithfully paid yearly flood insurance premiums and trusted that they would be paid correctly following a flood, yet inexcusably, three years later, remain fighting for what is rightfully theirs. Our homeowners deserve the transparency from FEMA that Gillibrand’s legislation calls for. The NFIP reformation created by this Legislation is a vital step in restoring the faith of our Sandy survivors in FEMA as a government agency, and those policies backed by FEMA. This Legislation provides hope to so many who felt their voices were never heard.  On behalf of all those affected by Superstorm Sandy, we thank you Senator Gillibrand.”

“We are very happy to hear and support Senator Gillibrand's legislation to provide much needed transparency and accountability on how flood insurance claims are handled, following Superstorm Sandy,” said Michele Insinga, Executive Director of Adopt A House. “Many feel they were severely underpaid after paying years, even decades of flood insurance premiums, only to find themselves denied for things such as earth movement, vast amounts of red tape and accusations of fraud, believed to have led to these underpayments. We are truly hoping that FEMA sees the urgency now 3 years later, that homeowners did what was expected of them in the process, where they thought they were secure in having insurance to cover their damages only to find what is seemingly a never ending battle that continues to prolong a true recovery, not just for themselves but that of their neighbors and community, and that this will lead the way for any future flood victims as they too work towards their own recovery secure in knowing this can’t happen again due to this legislation.”

“I’m proud of the collaboration between Republicans and Democrats in the two houses of Congress,” said Congressman Donovan. “Our bill will codify what should be a basic tenet of the National Flood Insurance Program: put the policyholder first.”

“Almost daily my staff and I hear from constituents still recovering from Superstorm Sandy,” said State Senator Phil Boyle. “It is reprehensible that these victims are required to wade through mountains of red tape from FEMA and other agencies who are tasked with helping, not hindering, storm recovery. I applaud Senator Gillibrand for her staunch commitment to streamlining this bureaucracy and look forward to working with her to put the focus back on the victims of Sandy and any future disasters."

“It is essential that our residents have flood insurance that is affordable, reliable and is there to support their needs, not create an adversarial situation that takes them years to collect their rightful awards,” said Assemblyman Joseph Saladino. “I am very motivated to work with anyone to bring reforms that protect our residents.”

“Superstorm Sandy devastated much of our community and left homeowners struggling to rebuild,” said Assemblywoman Kimberly Jean-Pierre (D-Babylon). “Senator Gillibrand’s vital legislation will ensure FEMA is protecting Sandy victims and helping them get the funds they deserve. Families depend on flood insurance to protect themselves against natural disasters and it’s shameful that insurance companies took advantage of an unclear claims process and often denied families the help they rightfully deserved. We must keep fighting to protect families and make sure we’re prepared for future storms and flooding disasters.”

According to court records and extensive news reports, including a devastating months-long investigation by 60 Minutes, private insurance companies appeared to have denied flood insurance claims of countless homeowners affected by Superstorm Sandy based on fraudulently altered engineering reports. Gillibrand, with Senators Charles E. Schumer (D-NY), Robert Menendez (D-NJ) and Cory Booker (D-NJ), demanded an oversight hearing to examine how FEMA handled the claims process and how FEMA managed the private insurance companies that facilitate the National Flood Insurance Program (NFIP) on its behalf.

In the wake of these allegations, thousands of claims were re-submitted for another review process to determine if their cases were properly handled, and whether their initial claims were underpaid by the National Flood Insurance Program. While more than three years have passed since the storm hit, more than 17,000 claims are still under review.

Gillibrand and Rice’s new legislation, The Flood Insurance Transparency and Accountability Act of 2015 would require more transparency so that property owners have access to the documents related to their insurance claims case, including draft reports; it would also demand accountability from FEMA in its oversight of the NFIP and the contractors hired to run it. The bipartisan legislation is also co-sponsored by Senator Charles Schumer in the Senate and Representative Dan Donovan (NY-11) in the House of Representatives.

Specifically, the legislation would do the following:

There have been reports that individuals working for engineering companies hired by insurance companies to document the structural damage to homes following Superstorm Sandy fraudulently altered the engineering reports. The homeowners had no way of knowing that the reports were altered from the original engineer’s draft to the final fraudulent report.

The new legislation would require FEMA to ensure that all documents, including drafts of reports and supporting documentation relating to a flood insurance claim are made available to the NFIP policyholder, and that the policyholder is notified within 30 days of filing a claim that those documents can be requested. This includes all draft engineering reports to ensure that reports are not fraudulently altered in the future.

2. Create a direct point of contact at FEMA for homeowners who have filed appeals with FEMA for claims that have been initially denied.

Homeowners have reported that they often do not have the ability to directly contact someone at FEMA to discuss their appeals, or the basis for the initial denial of their claims.

Gillibrand’s legislation would require the flood insurance advocate’s office, which was created by the Homeowner Flood Insurance Affordability Act, to provide all policyholders with a direct point of contact at FEMA to discuss their appeals.

3. Require FEMA to conduct yearly reviews of the“Write Your Own” insurance companies and other private entities working with flood insurance claims.

There have been reports of engineering companies and law firms improperly overbilling the Federal government.

The legislation would require FEMA to annually review all private entities that contract with the NFIP to ensure compliance with, and enforce violations to, all policies and procedures in place to protect taxpayer dollars. It would also require FEMA set up a process to ensure that all engineering and litigation costs are justified on a case by case basis to ensure that federal funds are being appropriately expended.

Gillibrand’s proposed legislation states that claims against policies under the NFIP would not be denied based on the “earth movement” exclusion when the earth movement was caused by a flooding event.

FEMA would be required to provide claimants with clear rules, forms, and deadlines. This includes communicating to policyholder the following information at the point of their initial claims denial:

Changes the statute of limitations on all flood insurance claims to run for two years from the date of loss – flood event – instead of starting at different times for different policyholders. It also provides that a policyholder who utilizes the FEMA appeal will have an extension of up to 90 days to file a claim

8. Require FEMA and Homeland Security to report to Congress.

FEMA would be required to provide a report to Congress no later than 1 year after the enactment of this Act, outlining the options identified by the NFIP Transformation Task Force to reform the National Flood Insurance Program, which include the following:

The Secretary of Homeland Security would be required to report on the specific actions taken to identify and prevent individuals and private entities that participated in defrauding policyholders following Superstorm Sandy from further participation in the NFIP, based on the results of the investigation of the Department of Homeland Security Inspector General.