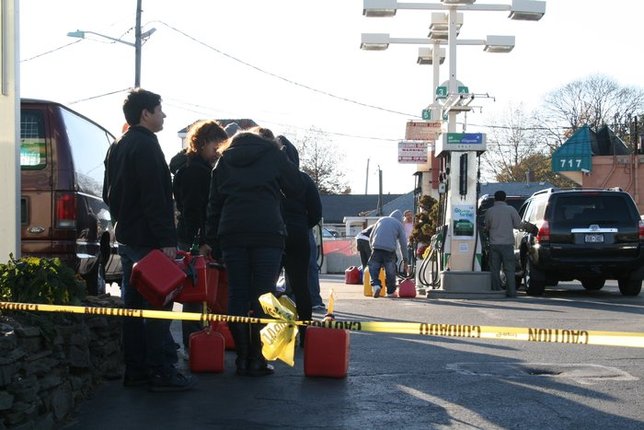 “New York State must learn the lessons from Superstorm Sandy so that we are better prepared for the future,” Governor Cuomo said. “This plan will prevent the long lines, delays and frustrations caused by gas stations being forced to close when they lose power.”

The proposed legislation builds on the initial recommendations from the NYS Ready Commission that Governor Cuomo empaneled late last year, and it was developed with input from local government officials and private-sector service station owners. It will be submitted to the Legislature in the 30-day budget amendments.

Under the Governor’s proposal:

All gas stations within a half-mile of highway exits and hurricane evacuation routes will be required to have a transfer switch installed by March 1, 2014, and to deploy and install a generator within 24 hours of losing power during a fuel supply or energy emergency. A transfer switch means a station is pre-wired to hook-up a back-up generator to power the pumps and other critical equipment. This requirement applies to approximately one-third of all gas stations in the state.

In addition, gas station chains with 10 or more stations under common ownership in any region of the state will be required to install a transfer switch for an additional 50% of their stations by March 1, 2016, and must deploy and install a generator to these stations within 48 hours of losing power during a fuel supply or energy emergency. This requirement applies to an additional approximately 15% of gas stations.

As of March 1, 2014, all newly constructed gas stations or gas stations that have major renovations will be required to have a transfer switch or back-up generator installed.

Approximately half of all gas stations in New York will be covered by these back-up power requirements. Small gas stations will be eligible for an exemption under the law.

To protect the public without placing an unfair burden on service stations – many of which are small businesses – the Governor’s proposal provides grants of up to $10,000 per station to help gas station owners install a transfer switch and/or purchase a back-up generator. These resources will come primarily from federal mitigation funds.

If enacted, the new law will supersede local ordinances and regulations, creating one set of rules so that the public can have confidence that enough gas stations will have back-up power while providing predictability for the private sector.

A gas station that fails to have a back-up generator in place will face a penalty of up to $2,000 per day. The penalty will not apply if the gas station was unable to have back-up power because of factors like the roads being closed to protect public safety or the station being inoperable due to damage or flooding.

Edward A. Diana, President of the New York State Association of Counties, said, “County officials commend Governor Andrew Cuomo for addressing one of the most serious issues that faced New Yorkers during Sandy response and recovery. Today’s proposal would ensure that gasoline continues to flow during times of crisis. This is important to ensure the safety and stability of our communities during potentially volatile times. Equally critical for us, is that this proposal includes a stream of funding that will make sure that the State does not add another mandate on our small businesses and service stations around the State.”

Peter Baynes, Executive Director of the New York State Conference of Mayors, said, “NYCOM appreciates the Governor’s efforts to learn from past experiences and proactively take steps to prepare for the next super storm. While it is impossible to prevent natural disasters and the many issues that accompany them, this proposal will facilitate the availability of gasoline in communities throughout the state when these events occur.”

Kevin Beyer, President of the Long Island Gasoline Retailers Association, said, “On behalf of the over 800 LIGRA members, I commend Governor Cuomo for his measured approach to ensuring the supply and availability of gasoline and diesel fuel to emergency responders and the public in the aftermath of a major storm or power outage. By designating service stations located in key areas and providing their owners with financial assistance to equip them with emergency back-up power, the prospects for safe and orderly recovery from future large scale disasters will be greatly enhanced. I look forward to our ongoing collaboration with the Governor and his staff as the details of the statewide initiative are worked out and the program fully implemented.”

Karen Moreau, Executive Director of the New York State Petroleum Council, which represents all segments of the oil and gas industry in New York State, said, “Governor Cuomo’s smart approach to improve preparedness will help avoid the long lines and chaos too many New Yorkers experienced after Sandy. We all recognize that fuel distribution during a disaster is a vital component to helping communities recover after a storm, but Governor Cuomo is taking concrete steps now so we are all ready when it really matters. Our members are committed to protecting the environment, continuously improving response plans and returning gas station operations as quickly and safely as possible after a storm. I applaud Governor Cuomo for working closely with industry to ensure the safety and well-being of New Yorkers.”

Peter Kischak, President of the Service Station Dealers of Greater New York, which represents 1,800 service station owners from the Bronx to New Baltimore, said, “This proposal strikes the right balance to meet the needs of New York consumers and the industry. We applaud Governor Cuomo’s leadership and looking forward to working with the Governor and the Legislature to develop this program.”