If signed into law, the bill would immediately halt the finalizing of the Mute Swan eradication plans. 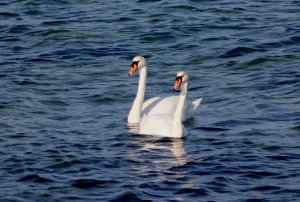 Albany, NY - June 18, 2014 - Senator Ken LaValle announced today his legislation to immediately halt the eradication of the Mute Swan has passed the State Senate.  The bill (S.6667) establishes a moratorium on the killing of Mute Swans and compels the Department of Environmental Conservation (DEC) to hold off any decisions until a new independent study is conducted.
If signed into law, the bill would immediately halt the finalizing of the Mute Swan eradication plans; create a board to review the new research, and require the board to report back within 120 days of receiving the study.
“This legislation will enable DEC policy to follow the science regarding Mute Swans.Now, we will be able to ensure any plan moving forward has the balanced, scientific basis that is necessary. ” Senator LaValle said.
Mute swans have graced the ponds and waterways of Long Island, the lower Hudson Valley and the shores of Lake Ontario for over 120 years. While not a native species, the swans have become a familiar sight and part of the ecology of these areas. The Department of Environmental Conservation (DEC) has filed draft regulations and a draft management plan which would designate the mute swan as a prohibited invasive species and provide for the elimination of the species in New York State through various methods including euthanizing the animals.
This drastic approach by the DEC has lead to questions about the basis of the study conducted by the DEC and the necessity of a total elimination of the mute swan. There are arguments that the population can be maintained and controlled on a regional basis. Before the complete eradication of a species, all avenues of possible preservation should be explored. This legislation would allow an independent committee to review the facts and examine all the alternative methods of dealing with the mute swan.