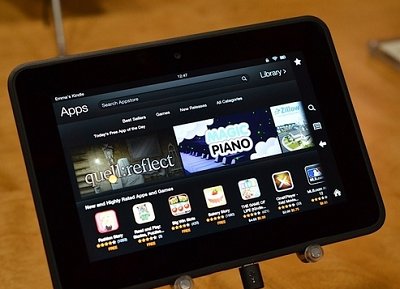 Both slabs have been upgraded to a quad-core processor (the 2.2 GHz quad-core Snapdragon 800, to be specific), providing triple the processing power of the last generation. Coupled with 2 GB of RAM, the new processor allows for faster web browsing, better gaming performance, smoother video playback, improved multitasking, and quicker app launching. Dolby Digital makes a return to improve the audio quality of the new Kindles, and battery life has been increased to offer 11 hours of mixed usage or 17 hours of pure reading on the 7” (the 8.9” can last an extra hour longer).

The screen, though not quite as ideal for outdoor reading as an electronic ink-based e-reader, has also made several substantial steps forward. Both size options are capable of 1080p video playback; the 8.9” has a 2560x1600 display and the 7” measures in at 1920x1200. That places the 7” at a crystal-clear 323 pixels per inch, closely rivaling Google’s recently released Nexus 7 (for comparison, last year’s Kindle Fire HD had 254 ppi and the iPad mini has only 163 ppi).

Impressive as the resolution of the Kindle Fire HDX is, Amazon has packed in an extra feature to make reading even easier on the eyes: “Dynamic Image Contrast” automatically adjusts the color of each pixel based on the amount of light hitting the screen, optimizing the screen for viewing in any condition. This differs from other tablets and smartphones, which can only adjust screen brightness to attempt to compensate for changing light conditions, and promises to augment an already high caliber screen.

Perhaps the most innovative addition with the new lineup comes not in the form of improved technical specifications, but in unprecedented customer support. The Kindle Fire HDX’s built-in “Mayday” button gives users access to an “Amazon expert” at any time every day of the year. After pressing the button, a tech advisor will appear in the corner of the Kindle’s screen to help guide the user through any problem, no matter how simple or complex. Users will be able to see the advisor and the advisor can see the Kindle’s screen, but advisors cannot see the user. They can, however, draw on the screen like an NFL sportscaster, circling and highlighting key areas as they walk users through each issue.

Tech advisors are also capable of performing any task on the tablet if the user would rather not do the work, and can turn their own viewing screen off should the user need to enter a password. Amazon has a goal of connecting owners to an advisor within 15 seconds of pressing the Mayday button, and says it is willing to hire additional employees required to meet that goal.

The 7-inch HDX will begin shipping on October 18th and the 8.9-inch model will be available on November 7th. Both sizes come in 16 GB, 32 GB, and 64 GB storage options, WiFi-only models, and 4G LTE iterations with a choice of AT&T or Verizon for service. Prices range from $229-$594. For the more budget conscious, last year’s Kindle Fire HD is staying on the market with a facelift to resemble the new generation and a price tag starting at only $139.