Yankee Stadium said its goodbyes to two of the greatest pitchers to have put on pinstripes on Sunday. 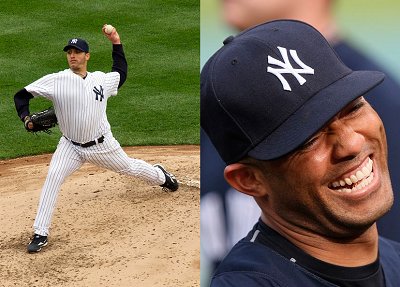 The Yankees followed a 5-1 win over the Giants with a dominant performance on Saturday. Ichiro Suzuki knocked in the first run of the game with a sacrifice fly in the bottom of the third, which Alex Rodriguez added to on an RBI groundout. Robinson Cano singled in another run to put the Yanks up 3-0.

Eduardo Nunez tacked on another 2 runs with a homer in the fourth, and Alfonso Soriano’s solo shot in the sixth made it 6-0. The offensive outpouring was much appreciated by the home crowd, but not entirely needed as Ivan Nova threw his third complete game with 7 strikeouts and just 6 hits on 108 pitches over 9 innings. He did not allow a run, shutting out San Francisco as the Bronx Bombers took the game 6-0.

New York got another strong pitching performance on Sunday as the team honored Mariano Rivera in one of the final home games of his career; it was also the last home start for Andy Pettitte, who announced his retirement late last week.

Mark Reynolds gave the team a lead in the third inning with a leadoff homer, putting them ahead 1-0 until Andy allowed a homerun in the bottom of the sixth. Pettitte stayed in past the seventh inning, but was taken out (with a standing ovation from the fans) for David Robertson after giving up a leadoff double in the eighth—it was just the second hit he allowed through 7 innings with 6 strikeouts on 104 pitches.

Unfortunately, David Robertson allowed that runner to score, prompting Girardi to bring Rivera into the game early. Rivera got two outs in the eighth, and finished off the ninth, but the Yankees could not produce a second a run for their pitchers. There was no save for Mariano, and Pettitte took a tough loss as the duo took the field together for an MLB record 154th time, but there was still a great deal of enthusiasm from a fan-base which will miss them both sorely.

The Yankees now stand 4 games out of a wild card spot with only six games left to play. Three of those six will be against the Tampa Bay Rays, starting at 7:05 PM tomorrow and continuing at the same time Wednesday and Thursday.

Following a 6-4 win on Friday, the Mets set up for a wet game against the Phillies on Saturday. Dillon Gee gave up the first run on a sacrifice fly in the bottom of the second, but David Wright hit his second homer in as many days to tie things up in the fourth.

Daniel Murphy sent the Mets ahead with a leadoff homerun in the top of the sixth, to which Juan Lagares added a 2 RBI triple. Travis d’Arnaud drove in Lagares on a double, giving New York a 5-1 lead.

Philly battled back in the bottom frame, hitting Gee for three straight doubles to start the inning. A Ruiz groundout followed by a Gee wild pitch finished off a 3-run inning which brought the differential back within 1. Thankfully, the Mets caught a lucky break as the Phillies would not come to bat again before the game was called for rain. Gee pitched what was technically a complete game with 3 strikeouts and 7 hits over 6 innings to improve to 12-10 as the Mets won 5-4.

The Phillies again took an early lead in Sunday’s close to the season series, hitting Carlos Torres for a run in the second inning. Andrew Brown tied the game with an RBI groundout in the fourth, but Philly’s Domonic Brown put Philadelphia up 2-1 with a single in the sixth.

Wilfredo Tovar got his first Major League single in a big way on a 2-run single that put New York up 3-2. Lagares added a bit of insurance with what proved a vital RBI double in the top of the eighth, and the Phillies got their last run on a Darin Ruf pop-out in the bottom half. LaTroy Hawkins nailed down the ninth to earn his 12th save of the year as the Mets swept Philly with a 4-3 win.

The Mets will play the Reds next, starting at 7:10 PM tonight. The series will continue at the same time tomorrow, and finish at 12:35 PM on Wednesday.

The Jets took an early lead against Buffalo yesterday afternoon. A 2 yard loss on a run from Chris Ivory to start the game was quickly forgotten when Geno Smith connected with Stephen Hill on a 45 yard pass.  The drive, which took just under six minutes, ended with a rushing touchdown by Smith to put New York up 7-0.

Buffalo started to battle back in the second quarter, kicking a field goal to get on the score board, then intercepting a Smith pass on the first play of the ensuing Jets drive and converting the miscue into another field goal to make it 7-6 shortly thereafter. The Jets put some more distance between them on their next possession, getting a pair of first downs on two 10+ throws, and doubled their score with a 51 yard pass from Geno to Hill. Despite two penalties for 20 yards on their last drive of the half, New York still managed to put up a few more points courtesy of a 47 yard Nick Folk field goal to take a 17-6 lead going into the third quarter.

Folk made it 20-6 when he put up the first points of the second half, but the Bills began chipping away at the lead with a field goal of their own. The next New York drive ended with a second Smith interception, resulting in another Buffalo FG to cut the lead down to 20-12.

The Jets had a quick three-and-out to start the fourth quarter, and 5 penalties by their defense helped the Bills along to their first touchdown of the game, concluding with a successful two point conversion to tie it 20-20. That score was short lived as Smith and Santonio Holmes hooked up for a 69 yard TD, retaking the lead 27-20. Despite another 5 penalties through the remainder of the game, the Jets hung on to the lead to earn their second win.

Geno Smith went 16/29 for 331 yards with 2 throwing touchdowns, a running TD, and 2 interceptions. Bilal Powell led the team in rushing with 149 yards on 27 carries, and Santonio Holmes led in receiving with 154 yards on 5 receptions with a TD. Stephen Hill followed with 108 yards and a TD on 3 catches.

Though they tied a team-high 20 penalties (for a total of 168 yards) against the Bills, the Jets improved to 2-1 on the season. They will play the Titans next Sunday at 4:05 PM.

Giant Holes in the O-Line

Little can be said about the Giants’ performance on Sunday, at least little of positive note. Eli Manning was sacked three times over New York’s first two possessions, and a fourth before the end of the first quarter. A 7-0 Carolina lead in the first grew to 17-0 after Eli got sacked twice more in the second quarter.

Cam Newton added another touchdown to the lead early in the second half, and a Manning interception on the following drive set the Panthers up for another TD. Eli would be sacked again before the third quarter was out, and left the game early for Curtis Painter to finish it out; Painter did just by throwing an interception in the waning moments of the afternoon.

The Giants lost 38-0 on a day in which Manning went 12/23 for 119 yards and an interception. Rueben Randle led the team in receptions with 2 for 40 yards, and David Wilson led in rushing with 39 yards on 11 carries (Eli Manning followed with 14 yards on 1 run). Big Blue had just 150 yards of total offense on a day in which their defense gave up 400. Their offensive line allowed 7 sacks, and again failed to help generate any kind of running game.

Now 0-3, the Giants will seek their first win against the Chiefs at 1:00 PM on Sunday.