Developer Editions of the Moto X went up for sale in the same week the White House petitioned to keep phone unlocking legal. 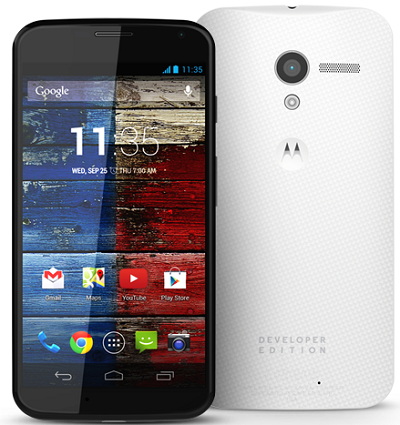 Last month Motorola launched its flagship smartphone, the Moto X. Designed to give consumers a unique level of control over their phones beyond the normal choice of a couple storage options and a few colors by letting buyers mix and match from 18 rear color options, 2 front colors, and 7 accents; the company is able to accomplish this by assembling its phone in Fort Worth, Texas, where it can piece together a unique Moto X and ship it out to a buyer within 4 days of the initial order.

As the only smartphone produced in the US, the new Moto stands as a bastion of American manufacturing in an industry where almost all assembly plants and jobs are located overseas. Last week Motorola announced that the product would not only be made in the USA, but also embody one of the country’s most beloved principles—that of freedom—by selling unlocked 32 GB models directly to consumers. The CDMA Verizon variant went public first, and a GSM version compatible with AT&T and T-Mobile followed on Friday.

The availability of an unlocked phone can be of great importance to any user who wants the freedom to switch from carrier to carrier or change their phone plan on a whim, as opposed to being locked into a 2-year contract with a single service provider. Unlocked phones typically cannot be purchased with a carrier subsidy which means the purchaser has to pay more upfront for the device (and the Moto X is no exception, coming in at $650), but early termination fees incurred by ending a phone plan prematurely can quickly make up the difference that would have originally been saved from buying on-contract. Purchasing a phone outright can also allow those still holding on to one of the unlimited data plans Verizon and AT&T are desperately trying to stamp out to keep their plan intact, while still upgrading to a new handset.

Having the option for unlocked phones could soon become significant to those who sign a 2-year contract as well. Changes in copyright law and new legislation set to take effect on January 26, 2014 would make it illegal for people to unlock smartphones of their own accord. This means that if a user was to buy a phone on-contract, serve the length of that contract and make all agreed-upon payments, then decided to take the phone obtained through the initial purchase subsidy to another network after the duration of the original plan had passed, he or she would be in violation of the law. A sentence of up to five years in prison could be imposed simply for taking a phone originally used on Verizon and trying to connect it to AT&T without Verizon’s blessing.

The White House sent a petition to the FCC on Tuesday, September 17, to enact a remedy to this strange new law, but action has yet been taken. If the law is not reversed before it goes into effect, using unlocked phones could become the only way to circumvent a system designed to prevent customers from migrating to different carriers, should the networks decide they do not wish to turn the key for former customers.