The oft-bizarre former NBA star lived up to his reputation when returning from a visit with North Korean dictator, Kim Jong-un. 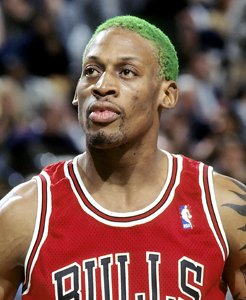 New York, NY – September 9, 2013 – Dennis Rodman returned home from his second trip to North Korea and hosted a press conference in New York City on his stay yesterday. The Democratic People’s Republic of Korea generated many headlines in the first half of the year by making loquacious threats against the United States and grandiose statements about its intended future as a nuclear nation. Kim Jong-un and his generals began to calm their rhetoric in the spring upon receiving pressure from one of their few allies and a small show of force by the US.

Near the height of its sabre-rattling, the secretive nation had welcomed Dennis Rodman—who once played for supreme leader Kim Jong-un’s favorite basketball team, the Chicago Bulls—within its borders for a brief stay. Rodman flew back to Pyongyang on September 3 on a trip sponsored by Paddy Power, an Irish gambling website.

During the press conference, Rodman remarked that he had met Kim’s infant daughter, confirming that he did indeed have a child, and intends to return in the winter with other former basketball players for a game against the DPRK national team on January 8 and 10. He expressed interest in brining Karl Malone and former teammate Scottie Pippen.

Roadman was also asked by Kim to help train the North Korean national basketball team for the 2016 Summer Olympics—a role which he evidently agreed to fill, though it is not quite clear in what capacity.

When asked about Kenneth Bae, the American citizen who has been held by the DPRK government and sentenced to perform hard labor, Rodman grew agitated and said it was not his position to help work towards Bae’s release. He had referred reporters to President Obama and former Secretary of State Hillary Clinton, describing them in less than flattering terms, when asked about the situation previously, seemingly unaware of Clinton’s departure from the position.