By Christian Abbatecola Published: May 12 2013

A new Windows Phone 8 flagship is making its way to the US’s largest carrier. 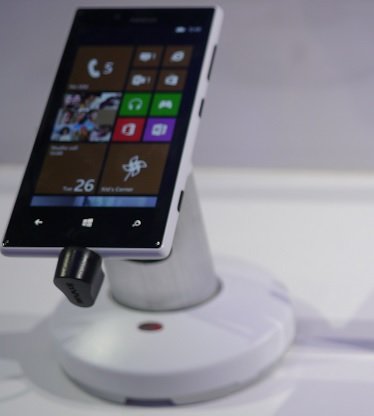 When Microsoft launched its new Windows Phone 8 operating system late last year there was a distinct lack of its most impressive handset on the nation’s largest carrier. While Verizon did get ahold of the lower-specced Lumia 822 and HTC 8X, Nokia’s Lumia 920 was conspicuously unavailable for Big Red.

This past week the Finnish phone manufacturer announced it would be making up for lost time by bringing its newest iteration of the flagship, the Lumia 928, to Verizon customers on May 16th. It will bear most of the same features as the 920, including wireless charging, 32 GB of internal memory, a dual-core 1.5 GHz processor, 2000 mAh battery, and a 4.5” HD screen which finds a happy medium between the small display of Apple’s iPhone 5 and the gargantuan physical footprint of Samsung’s Galaxy S and Note lines. The display itself has been changed from IPS to AMOLED, and the 928’s width and depth have been slimmed down a tad from the 920’s.

One the phone’s more compelling features is still perfectly intact—an 8.7 megapixel PureView camera has a lens which floats with the phone as it moves to take in more light and prevent image blurring which would normally result from a shaky hand—and now has a xenon flash to come even closer to the quality of a DSLR camera and perform better in lowlight settings. The microphone and speaker have also received a power boost to record and playback higher quality sound.

As a Windows Phone 8 device, the new Lumia will be able to take advantage of Microsoft’s Live Tiles to provide users updates from their favorite apps at a glance, without the need to click through each one individually. Undoubtedly both Microsoft and Nokia will hope that the new phone will improve their market share; though Windows Phone has gained 1.9% more of the smartphone market year-over-year from Q1 of 2012 to 2013, it still only accounts for 5.6% of new smartphone purchases. Much like BlackBerry, Windows Phone 8 will need a substantial push forward to break up the Android-iPhone duopoly.