The latest redux of Apple's flagship product is just over the horizon.

In keeping with its tradition of releasing a new iPhone every year, Apple will be pushing its sixth iteration of the ever-popular smartphone, the iPhone 5 (last year’s iPhone 4S broke the numbering scheme while introducing the world to Siri), unto several markets across the globe tomorrow.  With a 4 inch screen and 7.6 mm thin body, the phone will be amongst the sleekest on the market and, unlike iPhones past, will also be capable of playing modern widescreen videos without letterboxing.  A new “all-digital” Lightning power connector is to replace the 30-pin port of previous Apple mobiles, allowing the body to be as small as it is, and charging the new iPhone to be a bit easier (the plug is identical on its top and bottom, meaning it can never be upside down). This change does, unfortunately, mean the new phone will be incompatible with almost all docks and accessories built for previous iPhones and iPods, however, there will be an adapter available to convert the new Lightning connector to the old 30-pin style. 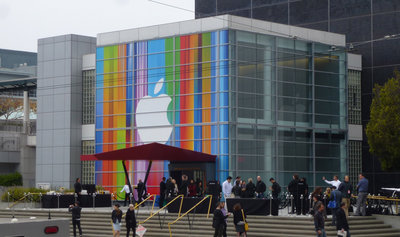 Now operable on the 4G networks of the various carriers which will be offering service for the Cupertino-based company’s latest, the iPhone 5 promises not to suffer any side effects from the added strain of faster data transfer. Its custom A6 processor will take the thinner, lighter device to faster speeds while extending battery life. In fact, Apple claims the chip will provide nearly double the CPU and graphics performance of its immediate predecessor- a lofty, but welcome claim considering the quality of Apple’s Retina Displays.

With a small frame and powerful inner workings, the iPhone 5 will launch in three varieties: a 16GB model at a carrier subsidized price of $199, a 32GB at $299, and a 64GB at $399. The iPhone is not capable of expanding its storage through SD cards, so if you’re on the hunt for one be sure to choose your model wisely (buying a second phone off-contract will be even pricier).

Thinking about getting the new iPhone? Not sure if it’s worth the jump from previous models? Tell us about it on the Long Island Lounge or leave a comment below.