A tragic hit and run accident in Brooklyn has killed an expecting young couple on their way to the hospital early Sunday morning. Their surviving, premature baby boy is said to be in serious condition. 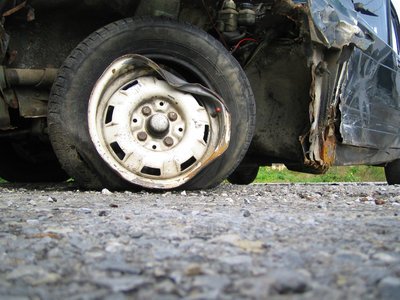 WILLIAMSBURG – Expectant parents, Nathan and Raizy Glauber, were killed in a hit and run in Williamsburg, Brooklyn early Sunday morning on their way to the hospital. Their surviving baby boy was born prematurely and is still in serious condition, authorities said.

Raizy Glauber was thrown from the car and landed under a parked tractor trailer when the livery car they were in was hit by the driver of a BMW. Her husband, Nathan, was pinned in the mangled wreck and emergency crews had to cut the roof off of the car to pry him free. The driver of the BMW and a passenger were said to have fled from the scene on foot.

Police said the Glaubers were pronounced dead at hospitals, and died from blunt force trauma, according to the medical examiner. The livery cab driver is expected to be OK.

The couple were married a year ago and were prominent members of the Orthodox Jewish community. Brooklyn is home to the largest community of ultra-orthodox Jews outside of Israel, more than 250,000, who practice very strict rules regarding social customs, clothing and interactions with the outside world. Jewish law calls for the dead to be buried as soon as possible, so just hours after their deaths the Glaubers were mourned at a funeral Sunday afternoon.

Police say they are questioning a person with regard to the accident, according to News 12.  A reward of $1,000 is being offered for information leading to the arrest and conviction of the BMW driver by a Jewish social services group. Anyone with knowledge of the suspects’ whereabouts is urged to call 917-407-6491.