Melody Anne Butler is collecting newborn, infant and toddle supplies at her Lindenhurst home to aid Long Island families who lost everything after Hurricane Sandy.

Melody Anne Butler, a pediatric nurse and mother of four children under the age of 8, wanted to do something to help her Lindenhurst neighbors who lost everything during Hurricane Sandy.  Butler, whose youngest child is five months old, realized she could make a tremendous impact in her community by collecting newborn, infant and toddler supplies.

“I was sitting with my baby thinking, oh my gosh, I’m so lucky, but I’m tied down and can’t get to the front lines,” Butler said, who was determined to do something to contribute to the relief effort.
Butler began spreading the word with her colleagues at Good Samaritan hospital in West Islip, but wanted the get the word out to the wider world.   As member of various “mothers” groups on facebook, who uses the social media platform to maintain contact with various health care professionals across the country, naturally, she started a Facebook page.  Butler originally wanted to call the group Allie’s Friends, thinking of her young daughter’s future playmates. 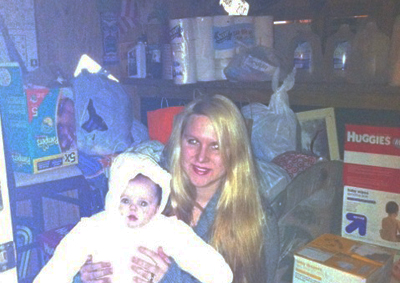 Help Our Long Island Babies Affected by Hurricane Sandy has been attracting attention on Facebook, and Butler has even been receiving packages at her home from as far away as Washington state and Colorado.  Butler is bringing the supplies, including baby formula and food, clothing, car seats, bottles, wipes and diapers, to two local churches: Our Lady of Grace in West Babylon, and Our Lady of Perpetual Help in Lindenhurst, where volunteers have assisted her in making service runs to deliver the supplies to families in need.
“Some families haven’t had power for weeks, and are conserving gas,” Butler said, discussing the dire situation many young families are currently in.
Butler is also preparing specialized packages for individuals who have directly contacted her requesting supplies.  (If you know of a family in need, you can let Butler know via the facebook page.)  One family Butler has helped, which lost everything in the storm, includes a set 4-month old triplets.  As a pediatric nurse, Butler points out, these babies often have special dietary needs and of course, require three times the supplies.
Butler is exhausting every possible avenue to bring these supplies to Long Island, and has also been in contact with companies that produce baby supplies, including Elecare, a baby formula company.
She began collecting supplies on Halloween, the day after the storm, and plans to continue to take donations through the New Year, though she hopes the situation will resolve by Christmas.  “It’s hard...some families don’t even have a place to put their stuff,” Butler explained, emphasizing the need for ongoing donations for families whose homes are now unlivable.
She is managing the donations in her Lindenhurst home, which was largely spared from any major flood or wind damage -- the family car was lost, along with a few hand-me-down car seats, but Butler still counts herself among the lucky.
“We’ve always been fortunate,” Butler said, speaking of herself and husband, young parents who have benefitted from a supportive family.  “This is our way of giving back.”
Share your thoughts on this article by posting your comment below or visiting our Long Island Living discussion forum.