The snowmobiler succumbed to his injuries on Thursday. 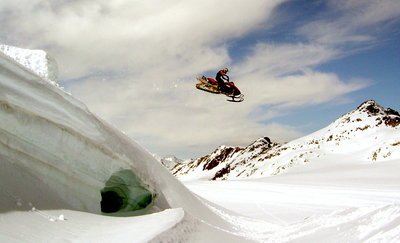 25-year-old Caleb Moore died on Thursday, one week after sustaining serious injuries when he crashed on his snowmobile during ESPN’s 2013 Winter X-Games in Aspen, Colorado.

The Texas native had competed on all-terrain vehicles since he was a child. He first tried snowmobiling four years ago. He was a four-time X-Games medalist, and fell during the snowmobile freestyle finals, attempting a back flip - a trick he had landed many times before.

Moore under rotated while attempting the trick, getting thrown off his vehicle onto the ramp. The snowmobile – which weighed about 450 pounds - then fell on top of him.

After the fall, Moore was initially treated with a concussion. He was knocked unconscious during the fall but when he awoke he was able to answer questions. Doctors later found out that he was suffering from internal bleeding. Moore was then airlifted to St. Mary's Hospital in Grand Junction, where he had emergency surgery on Friday.

This is first death in the history of the Winter X-Games, which first began 17 years ago.

In a statement released on Thursday, ESPN said: “we are deeply saddened by Caleb Moore's passing and our thoughts and prayers go out to his parents, Wade and Michelle, his brother, Colten, and the entire Moore family.”

ESPN added that they will be investigating the dangers and disciplines involved with the sport and may make changes depending on their findings. The company also said that there are inherent risks in these sports, especially when the best in the world are competing.

Moore’s younger brother, Colten, is another competitor in the X-Games that took home the gold medal for the 2012 freestyle snowmobile competition. Colten sustained an injured pelvis on Thursday during the same competition that claimed his brother’s life.

The Winter X-Games currently has five snowmobile categories. Freestyle was added in 2006, and some are raising questions over the safety of the sport. There were several crashes and injuries throughout this year’s snowmobile competitions, including one spectator that was injured when a snowmobile crashed into a group of spectators.

Fans and athletes alike remain shocked at what happened to Moore.