A 60-foot finback whale died after attempts to rescue it after it became stranded on a beach in Breezy Point, Queens, failed on Thursday.

Attempts to rescue a stranded endangered whale on the beach in Breezy Point, Queens, the same community ravaged by flood and fires during Superstorm Sandy, failed on Thursday, according to news reports. 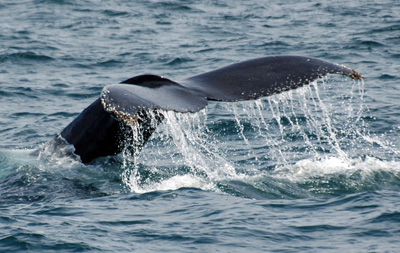 Reuters reports that the 60-foot finback whale was emaciated, according to marine officials, who are now making plans for necropsy and removal of the corpse.
Speaking with NBC news, Rob Giovanni, the executive director of the Riverhead Foundation for Marine Research and Preservation described the whale as “severely emaciated” and “underweight.”  He said on Wednesday, after the whale became stranded the first time, that the “outcome does not look good.”
Biologists confirmed that the whale was dead on Thursday after it became stranded a second time on the bay side of the Queens community now devoid of residents.
Finback whales, which can grow up to 70 feet in length and weigh over 70 tons, are the second largest species after blue whales.  Finbacks typically migrate to warm, equatorial waters during the winter, where they mate and give birth.  Officials hope to learn more about the large mammal's death through a necropsy.
Share your thoughts on this article by posting a comment below, or by visiting our Long Island Living discussion forum.