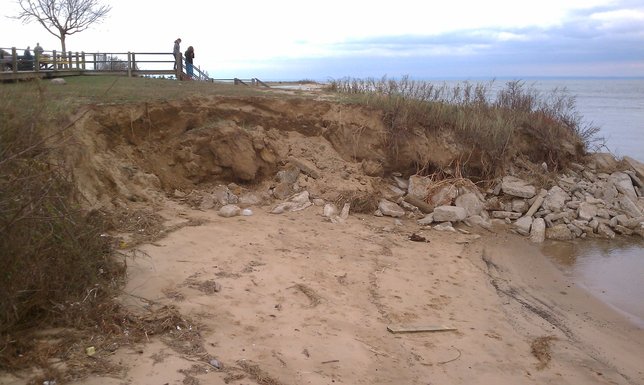 “Here on Long Island, we are on track to reopen more than 30 State Parks for Memorial Day weekend, as we continue to make tremendous progress in repairing damage to the parks’ roads, landscaping, infrastructure and beaches caused by Superstorm Sandy,” Governor Cuomo said. “The timely reopening of these parks is especially important as the summer tourism season begins. And beginning Saturday, Long Island families and visitors can enjoy this popular destination at Orient Beach.”

During the storm, the two-mile-long entrance road and Gardiners Bay shoreline sustained serious erosion, and four sections of asphalt roadway were damaged. The buried utilities along the entrance drive were exposed. All of the buildings in the park were flooded. The storm surge and flooding damaged and/or destroyed dozens of trees along the entrance drive and washed a lifeguard shack and picnic tables from the beachfront.

With the assistance of the New York State Department of Transportation, the entrance roadway has been rebuilt, and approximately 2,120 feet of the Orient Beach State Parkway has been repaved. Two areas of “rip rap” slopes have been installed to protect the new roadway along the Gardiner’s Bay shoreline. Rip rap slope protection is a layer of stone designed to protect and stabilize areas subject to erosion.

“It has been inspirational to see the amount of work and commitment that has gone into reopening this popular state park over the last six months. Despite the great task, we knew it was vital not only to make sure Orient Beach was reopened before Memorial Day but all of our Parks and Beaches,” said Office of Parks, Recreation & Historic Preservation Commissioner Rose Harvey. “From the crews in the field to Commissioner McDonald to the Governor himself, this reopening is testament that teamwork is really the best way to tackle the toughest of challenges successfully.”

NYSDOT Commissioner Joan McDonald said, “Following the vast damage caused to Long Island by Superstorm Sandy, Governor Cuomo committed to quickly repairing the south shore beaches and roads leading to them. Working together with Commissioner Harvey, we have helped achieve this goal for the families who live here, the vacationers who travel here and the businesses that rely on them.”

Orient Beach State Park is open daily, year round from 8:00 am to sunset. The park is a four-mile long peninsula that extends westerly into Gardiners Bay near Orient Point. The park is a popular recreational facility, known for its picnic area, swimming beach, pavilion, bike path, gift shop, playgrounds, fishing and kayaking. The park is a recognized National Natural Landmark, as well as an Audubon Important Bird Area and a significant habitat for endangered shore birds and plants.

The park will open for the first time since the October storm. Park visitors will see minor facility repairs underway, tree pruning, native vegetation replanting and landscaping work continuing during the season.

The New York State Office of Parks, Recreation and Historic Preservation oversees 179 state parks and 35 historic sites, which are visited by 60 million people annually. A recent study commissioned by Parks & Trails New York found that New York State Parks generates $1.9 billion in economic activity annually and supports 20,000 jobs. For more information on any of these recreation areas, call 518-474-0456 or visitwww.nysparks.com, connect on Facebook, or follow on Twitter.