The Jets’ playoff hopes are now a fair bit slimmer than they were yesterday morning, but they are not eliminated yet. 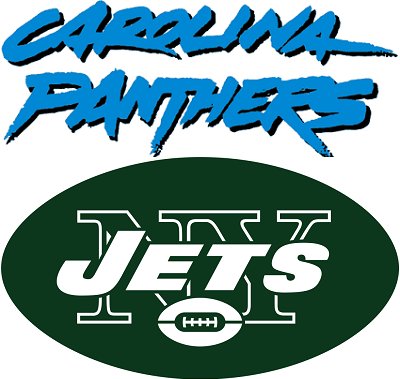 Jets Come Up Short in Carolina
The Jets entered yesterday’s game in Carolina still very much alive in the playoff hunt. After both teams started the day off with unsuccessful drives, the Panthers became the first on the board courtesy of a 35-yard field goal. Geno Smith got his team into scoring possession as well on the ensuing drive, highlighted by a 16-yard pass to David Nelson and a 10-yarder later in the drive. Nick Folk kicked a 54-yard field goal to tie the game at 3 apiece.

Carolina got the ball back to start the second quarter and again marched deep into New York territory, but had to settle for a field goal once more. Smith connected with Nelson for 18 yards early in the next Jet drive, and a 35-yard run by Chris Ivory helped take Gang Green to the Carolina 9-yard line. Unfortunately neither Ivory nor Smith could make it into the end zone, and it was up to Folk to tie the game once more with another FG.

The quarter unraveled after that point for New York. On the very first play of the next Panther drive, Cam Newton threw a short pass to DeAngelo Williams who ran it the rest of the way for a 72-yard touchdown. The Panthers took prime field position and converted it into another field goal on their next possession, entering halftime 16-6 on top of the Jets.

New York was not down and out quite yet, however, and on their second drive of the third quarter Geno Smith was able to march them down field from their own 14-yard line. A 35-yard pass to Jeff Cumberland and a 13-yard run by Bilal Powell did the heavy lifting, and Sheldon Richardson ran it up the middle on the goal line for the first Jet touchdown of the day.

Their lead cut down to 3, the Panthers blocked a punt to start the fourth quarter and took advantage of the resulting field position to run in another touchdown, going ahead 23-13. On the next drive, the Jets were only able to reach their own 30 before an 11-yard toss from Smith was picked off by Captain Munnerlyn, who ran it all the way back to put Carolina up 30-13.

Geno hooked up with Jeremy Kerley for 25 yards and Kellen Winslow for 12 on the next drive, before throwing an 8-yarder into the end zone for Cumberland. The drive took just under 4-and-a-half minutes, but Carolina hung on to the ball for the rest of the night, and as time expired the Jets took a 30-20 loss.

Now 6-8, the Jets are not yet eliminated from the playoffs, though they will need to win out and for the Dolphins and Ravens to both lose all their games in the next two weeks in order to take the sixth seed. They will host the Browns at 1:00 PM next Sunday.

Giants Shutout by Seahawks
Before yesterday’s game against the Seahawks, Eli Manning compared the afternoon to little league—when teams would play to have fun without the worry of a championship looming over their heads. The team, however, did not look to be having very much fun as the afternoon wore on.

The first quarter began innocuously enough. Though the Giants struggled to get anything going on offense, their defense was still able to hold Seattle to a single 49-yard field goal. Unfortunately, as the quarter drew to a close the game took a turn for the worse; Eli Manning was picked off at the Seattle 35-yard line on a pass intended for Victor Cruz.

That interception ended up doing no damage, thanks to a quick defensive stop by Big Blue, but five minutes into the second quarter Eli was picked off again. This time, the interception was taken back for a touchdown and the Seahawks went ahead 10-0. Another field goal before the end of the break would put the lead at 13 entering halftime.

The third quarter didn’t go much better for the Giants. A sack on the first drive of the half knocked the ball out of Manning’s hands; the ball was recovered by New York, but they had to punt it away on the next drive. Seattle ran down the field and put up another FG on their ensuing possession, going ahead by 16.

Russell Wilson was intercepted by Antrel Rolle in a temporary change of pace at the end of the third, but Eli gave it right back with a pass intended for Hakeem Nicks deep in Giant territory to start the fourth. A 12-yard Wilson pass gave Seattle yet another TD as they went ahead 23-0.

The G-Men finally had a scoring opportunity late in the game as they made their way to the Seattle 13-yard line. Eli threw a pass into the end zone; Hakeem Nicks touched it, but only to tip it into the hands of Earl Thomas. Seattle kept possession after that, and ran down the clock to shutout the Giants.

Eli Manning went 18/31 for 156 yards with 5 interceptions and 2 fumbles in the 23-point loss. Andre Brown had only 17 yards on 11 carries and Jerrel Jernigan led receivers with 67 yards on 7 catches.

The Giants will play the Lions at 4:05 PM next Sunday.

Knicks Slowly Improve
The Knicks are beginning to show some slight signs of life, having won three of six heading into Saturday’s game against the Hawks.

After Atlanta got out to a slight 12-9 lead, Carmelo Anthony led the Knicks past the Hawks, scoring 8 of their next 11 points as New York pulled ahead 20-16. The four point spread held through the end of the first quarter, but the Hawks rallied back to take a 31-30 lead early in the second. New York took control right back, however, as Tim Hardaway Jr. led a 12-0 run and his team took a 57-48 lead into the half.

The Knick lead grew to 14 and hovered around that mark for much of the third quarter before Kyle Kover dug in and started chipping away at the deficit, knocking down 4 threes as Atlanta climbed back into the game. After closing back within two points, Atlanta entered the fourth down 81-77.

Melo and Amar’e Stoudemire kept the Hawks at bay for much of the fourth, leading by as much as 15 before Atlanta went on 12-2 run. The rally was not enough; after a Hardaway free throw the Knicks won 111-106.

The victory was New York’s fourth win in the last seven games, and just their fourth win at Madison Square Garden this season. Now having passed the Philadelphia 76ers in the Atlantic division, the Knicks will try to move higher up the ranks when they play the Wizards at 7:30 PM tonight.

Rangers Snap Home-Losing Streak
The Rangers came into last night’s game against the Flames on a 4-game losing streak, and were likely none too happy with the way the match started. Mikael Backlund gave Calgary the first goal of the night with a tip-in 7:28 through the first period, and Curtis Glencross made it 2-0 at the 15-minute mark.

Their outlook began to brighten before long, however, as Derek Stepan put the Rangers on the board with a wrist shot just 25 seconds after the Glencross goal. Carl Hagelin wrapped around to tie the game 7:29 through the second period, and the score remained tied through the frame.

Calgary pulled back ahead just under five minutes into the third on a Sean Monahan shot, but New York tied it again with fewer than eight minutes to go on a Chris Kreider backhanded shot. Despite a 5-on-3 power play, the Rangers were not able to score again before the end of regulation, nor were the Flames, and a late-game penalty put New York a man down for much of the overtime period.

The Rangers survived overtime, and took the game into a shootout. Mats Zuccarello struck first, but was quickly answered by Joe Colborne. Nash and Stepan both missed their shots, but their opponents across the ice did as well. Brad Richards scored in the fourth round only for Lee Stempniak to do the same. Both teams missed in the fifth round and after Dominic Moore scored in the sixth he was matched by Paul Byron. Benoit Pouliot put New York back on top in the seventh round, and Henrik Lundqvist was able to at last make a much-needed stop against Backlund, bringing an end to the shootout.

Lundqvist blocked 18 of 21 shots though 65 minutes of play as the Rangers won for the first time in five games. They will host the Penguins next, at 8:00 PM on Wednesday.

Islanders Fall in Overtime
The Islanders’ sticks were kept silent for the entirety of Saturday’s game against the Canadiens. Through three scoreless periods of regulation and just under two minutes of overtime, the team managed 21 shots on goal only to see every one of them blocked.

Evgeni Nabokov, who was sidelined with a lower body injury through much of New York’s losing streak, did his part. Nabokov stifled the Montreal offense and kept them off the board, blocking 24 shots over the course of the night. The 25th, however, which came off the stick of Max Pacioretty 1:51 into OT, got past him, and the Islanders fell 1-0—their 12th loss in their last 13 games.

The Islanders will host the Tampa Bay Lightning next, at 7:00 PM Tuesday night.