After a slow start to the week, the Islanders beat the Oilers last night. 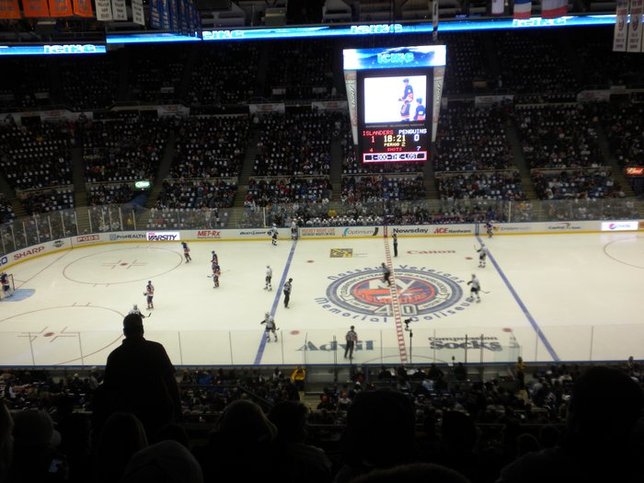 Islanders Defeat Edmonton
After losing their last two games, the Islanders had what looked to be an easy opponent in the as yet winless Sabres on Tuesday, but the two ended up trading blows through the course of the night.

Frans Nielsen scored the first goal of the match 13:11 into the game, providing a lead which lasted past the first period. Buffalo managed to get past Nabokov 5 minutes into the second; Matt Martin broke the tie on a snap shot off a Cizikas assist at 8:08, but the Sabres tied the game again on a power play just over a minute afterward.

Still even at 2-2 nearly 9 minutes into the third period, Matt Moulson slapped in a shot on a power play, giving New York a 3-2 edge. That score held through most of the period, but Buffalo again tied it with just 2:01 left to go on a Foligno goal.

A scoreless OT period gave way to a shootout in which only Moulson could score for the Islanders, and the Sabres knocked in both of their first two shots, handing New York an overtime loss. Nabokov blocked 31 of 34 shots before the shootout.

Now on a 3 game skid, the Islanders hosted the Oilers last night. Josh Bailey put them on the board first off a Hamonic assist midway through the first period, but Edmonton tied the game on a Taylor Hall goal at 15:52 before pulling ahead 2-1 on a second Hall goal 8 seconds later.

Kyle Okposo tied the game again just under five minutes into the second and, after most of the period passed without another goal from that point, John Tavares snapped the go-ahead shot in off an Okposo assist with 67 seconds to go.

The Islanders did not score again, but they continued their shutdown of the Oilers after the two Hall goals, and held Edmonton scoreless in the third. Nabokov blocked 27 of 29 shots as his team took the game 3-2.

The Islanders will continue their home stand against the Hurricanes at 7:00 PM tomorrow night.

Rangers Snap Cold Streak
After losing all but the second of five games out west to start the season, and giving up 20 goals in the last three, the Rangers finally looked ready to right the ship when they played the Capitals on Wednesday. They still will not see the inside of their own stadium until the end of the month, but a major uptick in defensive performance came with the return to their native time zone.

Washington was no slouch on defense either, shutting New York out through the first half of the game for that matter. John Moore was able to at last put an end to the scoreless tie with a snap shot off an assist from Brad Richards 12:05 into the second. Richards played a similar role in helping Ryan Callahan to score the second Ranger goal less than two minutes later.

Henrik Lundqvist returned to form, blocking all 22 shots which made their way to him on the night, and got some help from his teammates with a few key deflections along the way. New York won the game 2-0.

The Rangers will play the Devils next at 7:00 PM tomorrow night, before heading to Philadelphia and Detroit to finish out the early road trip.