By Christian Abbatecola Published: May 14 2013

The Rangers have made it to round 2 of the playoffs and the Yankees have taken sole possession of 1st place, but the Knicks were shut down, the Islanders were shutout, and the Mets continued ... 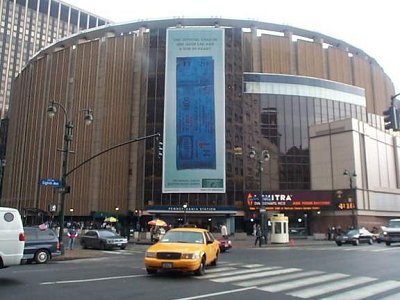 Rangers Move on to Round 2

Having lost a low-scoring game on the road to fall behind Washington 3-2, the Rangers buckled down on defense on Sunday. The team also watched its step, making sure not to fall on the wrong side of a power play for the entire night. With Brassard’s goal midway through the second providing the sole offense for New York, that strong defensive showing proved vital as Lundqvist was able to stop all 27 shots that came his way. The Rangers won 1-0 and forced the series back to Washington.

Leading into last night the home team had won every game in the series. The Rangers must then have breathed a sigh of relief when Asham scored the first goal of the night 13 minutes into the first to give them a lead. Pyatt added to it with a shot of his own early in the second, and Del Zotto made it 3-0 two minutes later.

Callahan got the third period started with a goal 13 seconds in, and Zuccarello made it 5-0 six minutes thereafter. Lundqvist stopped all 35 shots on goal as the Capitals were shutout for the second straight night.

The Rangers will now move on to face to Round 2 of the Stanley Cup playoffs in which they will face the Boston Bruins, who made a dramatic comeback in their own Game 7 last night. The first game will be played at 7:30 PM on Thursday

After Pittsburgh shutout the Islanders to put them down 3-2 in the series, New York took the lead in Game 6 early and often. Tavares struck first, putting the Islanders on top with a goal just over five and a half minutes into the game. Pitts tied the game two minute later, but McDonald gave NY a 2-1 lead before the period ended.

The Penguins tied the game once more midway through the second with the lone goal of that period, however, Grabner put the Islanders ahead again early into the third. The Penguins found an answer once more with just over five minutes left in regulation, forcing an eventual overtime. Unfortunately the back-and-forth ended with Pittsburgh taking its first lead of the night and putting an end to the Islanders’ season 7:49 into OT. Nabokov blocked 17 of 21 in the loss.

With that, the Islanders have seen their playoff hopes come to an end. They fought hard to stay in close competition with the NHL East’s top seed, but could not hang on to force a Game 7.

The Mets split the first two of a four-game set with the Pirates, but they were never even in Game 3. After Pittsburgh hit Niese for 4 runs between the second and third they knocked him out of the game in the middle of a 5-run fifth inning. New York would only score a pair of runs, one of which came off the bat of Andrew Brown who homered in the ninth, as they lost 11-2.

The final game on Sunday afternoon was much closer, with Lucas Duda giving the Mets an early 1-0 lead when he homered in the second. Pitt responded with a 2-run homer courtesy of Clint Barnes in the third and, after Baxter tied the game in the seventh, took a 3-2 lead in the eighth. That score would hold through the end of the game.

Having lost 3 of 4 to the Pirates, the Mets traveled to St. Louis last night. Jeremy Hefner allowed 2 runs in the first inning, but Daniel Murphy and David Wright combined to bail him out with a 3-run second. Hefner would allow another run in the bottom of the second to tie the game at 3 before buckling down and keeping the game tied through the sixth. The Mets’ bullpen could not get the job done, however, as it allowed three runs in the seventh for which New York had no answer. The game was lost 3-6.

Now 14-21 on the year, the Mets will play the Cardinals again at 8:15 PM tonight and continue the series at the same time tomorrow.

After taking 2 of 3 from the Rockies the Yankees swept the Royals over the weekend. Andy Pettitte pitched game 2, allowing just two runs which came in the third and fourth innings; fortunately the Yanks already had a run on the board when Veron Wells smashed a 2-run homer in the fifth to put New York up 3-2. Pettitte pitched 7 complete innings to get the win, and Rivera picked up his 14th save along the way.

Kuroda also found just enough offensive support to pick up his fifth win on Sunday. He allowed a run in the first, but Robinson Cano and Wells drove in 3 runs on back-to-back homers in the third to give the Yankees a 3-1 lead.  Wells picked up another RBI in the fifth as NY went on to win 4-2 and Rivera got his 15th save.

Following the sweep, the Bronx Bombers made a stop in Cleveland yesterday to finish out the second half of a four game set which had been rained out last month. The original series had ignited their hot streak which recently drove the team into first place, but the Yanks’ bats went cold in the first half of yesterday’s traditional double header. David Phelps allowed just one run, which came in the first inning, and that would be the only run scored for the whole game as Cleveland won 0-1.

The second half of the double header looked as though it would be a mirror image of the first for most of the afternoon. Wells brought a solitary run home in the first and Nuno held the Indians scoreless through five innings in his first major league start. The Yankees’ bullpen did its job to keep the shutout going, but the symmetry ended in the seventh when New York pieced together a 6-run inning. Nuno got his first win as the Yanks toppled Cleveland 7-0.

New York is now in sole possession of first place in the AL East and tied with Texas for first overall in the American League. The team will try to pad its lead when it meets the Mariners at 7:05 PM tonight for the first of three games.

Despite three full days of rest following an offensive outburst which had the Knicks running away with Game 2 against Indiana, New York couldn’t buy a bucket on Saturday night. The Pacers’ stifling defense kept the team shooting just 35% from the field, and was evidently intimidating enough to convince New York to only attempt 11 shots from 3-point range as a unit.

The Knicks fell behind 15-18 in the first quarter and kept the spread at 3 as both teams put up 18 in the second. A 20-26 third in Indiana’s favor would prove the most offense either team would get in a quarter, and the gap widened by 2 in the fourth. New York lost 71-82.

On a night in which the Knicks’ collective offense was absolutely abysmal, Carmelo Anthony led the team with 21 points on 6 of 16 from the field. Tyson Chandler and JR Smith contributed only 9 apiece, and Iman Shumpert led the team in rebounding with 10. Amare Stoudemire scored 7 in just under 9 minutes of play on his first night back since having knee surgery on March 11th.