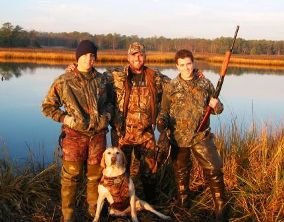 Hunting and trapping are important management tools for several species, including deer, bear, beaver, and Canada geese. These activities also provide significant benefits to New York's economy, especially in rural areas. Sales of sporting licenses, hunting equipment and accessories of all kinds, and expenditures for travel to hunting locations provide tens of millions of dollars annually for wildlife conservation programs in New York and contribute significantly to state and local economies. A recent national survey estimated that hunter expenditures on equipment and trip-related expenses in New York totaled more than $1.5 billion in 2011.

"New York offers an incredible variety of hunting and trapping opportunities to satisfy every interest imaginable," Acting Commissioner Gerstman said. "DEC biologists and technicians work hard to identify and provide recreational hunting and trapping opportunities every year while ensuring that harvests of all species are sustainable on a long-term basis. We urge all hunters to comply with harvest reporting requirements and to respond to any surveys they may be selected for."

Some highlighted hunting opportunities for this year in New York are listed below.

Big Game
Bowhunting season opened in northern New York on September 27 and in the rest of upstate New York and Suffolk County on October 1. Bowhunters in 12 of the state's 92 Wildlife Management Units, where deer have been above desired levels for many years, are reminded that the first 15 days of early bowhunting season are for antlerless deer only; the affected units are WMUs 1C, 3M, 3S, 4J, 8A, 8C, 8F, 8G, 8H, 8N, 9A, and 9F.

New York's fourth annual Youth Deer Hunt will occur in upstate New York over the Columbus Day weekend (October 10-12). During this hunt, 14 and 15-year old junior hunters may take a deer of either sex with a firearm when accompanied by a licensed and experienced adult mentor visit DEC's website for more information. Rules for 14-15 year old junior hunters and their mentors including proper licenses and blaze orange requirements also apply during the youth deer hunt. New York's first Youth Deer Hunts in 2012-2014 were a positive experience for thousands of young hunters and provided a great opportunity for families to celebrate their hunting heritage and build a new generation of deer hunters and wildlife enthusiasts. Approximately 13,000 junior license holders are eligible for this opportunity and nearly 4,000 deer have been taken during these youth hunts (approximately 1,300 per year).

Deer hunters should also be aware that the application deadline for Deer Management Permits is October 1. Hunters should know which WMU they intend to hunt before they apply.

Small Game Mammals
Many people begin their hunting experience with small game, such as squirrels, for which the season opened on September 1, or cottontail rabbits, which opened upstate on October 1; hunting seasons for squirrels and rabbits will open November 1 on Long Island.

Coyote hunting season opens across all of upstate New York on October 1, whereas seasons for other furbearing species (raccoon, fox, bobcat, and others) generally open on October 25, when trapping seasons open as well. The areas open for bobcat hunting and trapping were expanded in 2013, and a special permit is required to take bobcats in those areas. Those interested in participating in the special permit program can contact a local DEC Wildlife office.

Hunters are reminded that the fall turkey hunting season dates and bag limits have changed for much of the state beginning this fall. There is a two-week fall turkey season and a statewide season bag limit of one bird of either sex, but season dates vary regionally. In the Northern Zone the season begins on October 1 and runs through October 14, and in the Southern Zone the season begins on October 17, running through October 30. The fall turkey season in Suffolk County (Long Island) runs from November 21 through December 4.

Waterfowl
September Canada goose seasons are coming to a close, but waterfowl hunters have plenty of opportunities to look forward to. Duck hunting seasons are set for five different hunting zones, with the earliest beginning on October 3 in the Northeastern Zone. Youth Waterfowl Hunts were held in late September for several zones (including September 26-27 in the Lake Champlain Zone), and junior hunters in western New York will have one to look forward to on October 3-4 (Saturday-Sunday only). Canada goose seasons will re-open in most of upstate New York on October 24.

New York hunters can apply for up to two deer management permits once they have secured a hunting license. DEC's computerized licensing system allows hunters to immediately learn the outcome of their permit application. The likelihood that a hunter will be selected for a permit is largely based on the number of deer management permits to be issued in a Wildlife Management Area and the number of hunters that historically apply for those permits.

Sporting licenses and permits can be purchased at one of DEC's 1,200 license sales outlets statewide. Licenses can also be ordered by telephone at 866-933-2257, or on DEC's website.

DEC also reminds hunters that DMPs may be transferred or "consigned" to another licensed hunter following procedures described on page 33 of the 2015-16 Hunting and Trapping Regulations Guide. Please note, however, that on some license tag sets, the preprinted lines on the reporting panel used to record transferred DMP numbers was omitted. In this situation, a hunter may simply write in indelible ink the Document ID number from the transferred DMP carcass tag on the license privilege panel or, if space is limited, on the reporting panel of the tag set. Hunters are allowed up to two consigned DMPs per license year.

Hunters Urged to Report All Deer, Bears, and Turkeys Taken
Hunters are required to report every deer, bear and wild turkey they harvest within seven days, and these reports are important for DEC to estimate total harvests and monitor population trends. Reports can be submitted to DEC's Game Harvest Reporting System in just a few minutes either on-line or by calling 1-866-426-3778.

Bear hunters in particular are urged to report because DEC's reporting system experienced problems over the first weekend of the early bear season in southeastern New York, and the number of reports has been much lower than expected. Hunters may report bears taken during that time even if more than seven days have passed, because DEC wants to obtain important biological data from all bears harvested.

Hunter Safety
All new hunters or trappers planning to go afield this upcoming hunting and trapping season must first complete a mandatory hunter or trapper education course before they can obtain the appropriate sporting license. Training in safe handling of firearms and hunting is a legal requirement for anyone hunting in New York. Courses are free to take and are taught by DEC-certified instructors. Although primarily offered for first-time hunters or trappers, anyone is welcome to attend a sportsman education course, whether it is for a refresher or an interest of the topic. For more on basic hunting safety rules visit DEC's website.