The Islanders won on Saturday, but neither hockey team is off to a strong start this week. 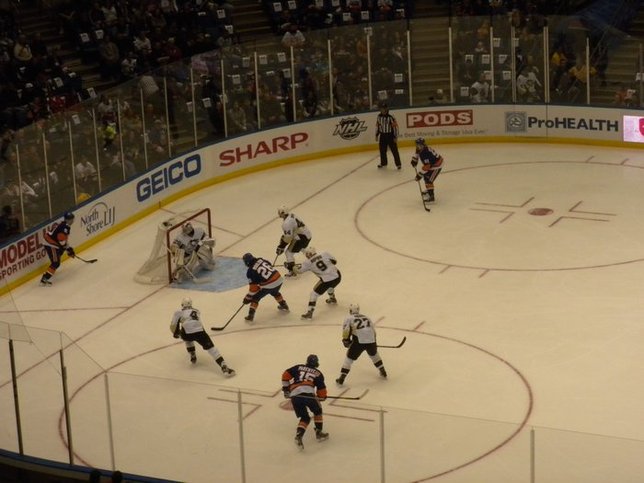 After a win over the Canadiens last Thursday, the Islanders strung together one of their few win streaks this short season with a victory over the Sabres on Saturday.

The game went scoreless for nearly two whole periods, until Streit broke the stalemate with 2:09 left in the second. Grabner knocked in New York’s second goal a minute later. Buffalo did not look any sharper in the third; Tavares scored a little over four minutes in and McDonald picked up the fourth goal of the night in the game’s final moments. Nabokov stopped all 35 shots that came his way as the Sabres were shutout 4-0.

New York continued its recent rash of scoring with another two-goal period as it opened to a 2-0 lead against Carolina off the sticks of Moulson and Tavares. The Hurricanes responded with two of their own in the final 92 seconds of second period, however, then took the lead and the win with two more in the third. The Islanders’ win-streak came to an abrupt end with the 4-2 loss. Kevin Poulin blocked 24 of 27 shots in his season debut.

Following the loss against Carolina, the Islanders hosted Boston last night for their second of three games. New York matched the Bruins’ early 1-0 lead with tip-in from Cizikas late in the first. It would be their only goal of the game, but Boston knocked in two more in the second and piled on a fourth at the end of the third. Nabokov stopped 30 of 33 as New York lost 4-1.

With that loss, the Islanders fall to 8-11-1 on the season.  They play next on Thursday at 7 p.m. against Toronto.

The Rangers continued a series of games against Canadian teams with a match against Montreal. Ryan McDonagh had to leave midway through the meeting after a hit from Max Pacioretty left him bloodied. Girardi would later need to be helped off the ice as well, injuring his ankle with under two minutes left. The injuries topped off a night in which the Rangers were shutout 3-0 by the Canadiens; Biron blocked 15 of 18 shots.

New York wrapped up its losing struggle against Canada with a bout against Winnipeg last night. After a scoreless first, the Jets struck twice in under 70 seconds to establish a 2-0 lead. Callahan put the Rangers on the scoreboard with an assist from Eminger and Girardi, but the Jets would ultimately enter the third period with a 3-1 lead.

Pyatt brought the game back within one goal just over nine minutes into the final period, only for Winnipeg to tack on another 20 seconds later. Stralman again cut the lead to one with 9:30 left in the game, but his would be the last goal. Lundqvist blocked 28 of 32 as the Rangers lost 4-3.

Now 8-8-2, the Rangers have dropped to fourth place in the NHL’s Atlantic division. They will try to put their four straight losses to Canadian teams behind them when they play the Lightning at 7 o’clock tomorrow night.