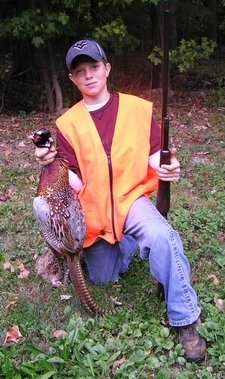 Since 2007, DEC has offered a special youth-only season to provide junior hunters (12-15 years old) the opportunity to hunt pheasants the weekend prior to the regular pheasant hunting season. In western New York, the youth pheasant hunt weekend is October 10-11. In northern and eastern New York, the youth pheasant hunt weekend is September 26-27, and on Long Island (Nassau and Suffolk counties) it is October 24-25. Pheasants will be released on a number of selected release sites across the state to provide ample hunting opportunities for junior hunters.

All current pheasant hunting rules and regulations remain in effect during the youth hunt.

All pheasant release sites provided by state-funded programs are open to public hunting. In partnership with New York City Department of Environmental Protection, pheasants will be released on state-owned lands prior to and during the fall hunting season at a number of sites on New York City Watershed lands. Pheasant hunting opportunities have also been augmented by private landowners who have opened their land to public hunting. A list of statewide pheasant release sites and sites receiving birds for the youth-only pheasant hunt weekends can be found on DEC's website (see below links).

The Day-old Pheasant Chick Program provides additional opportunities for pheasant hunters. This program was developed in the early 1900s to provide day-old pheasant chicks to cooperating 4-H groups and sportsmen and sportswomen. The chicks are distributed to program participants in May and June, and cooperators incur all costs associated with rearing the birds, including feed, water, utilities and facility construction. The birds are raised to adulthood and released on lands open to public hunting before the season opens. This year, approximately 40,000 pheasant chicks were distributed statewide as part of this program. Anyone interested in raising and releasing pheasants to expand next year's hunting opportunities should contact DEC's Reynolds Game Farm at (607) 273-2768.

Boundaries for pheasant hunting zones conform to Wildlife Management Units used for management of other upland wildlife. Wildlife Management Unit boundary are available via DEC's website. In addition to knowing these unit boundary descriptions, hunters should review the 2015-16 New York Hunting & Trapping Guide for complete regulations and other important information before going afield. Hunters who plan to use private lands should ask permission from the landowner.