A six-month investigation resulted in the seizure of approximately 24 kilos of heroin (53 lbs) and over 9 kilos of cocaine (20 lbs). 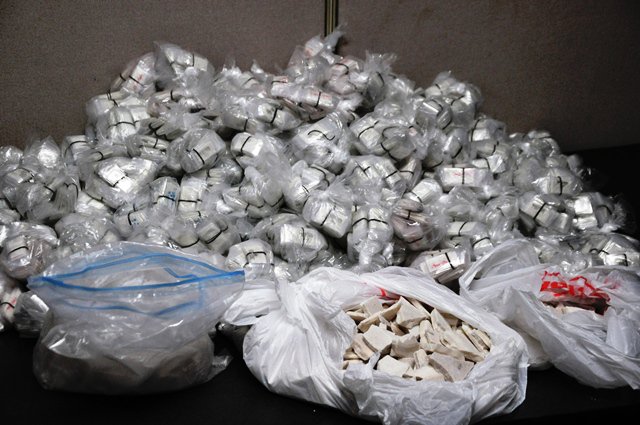 New York, NY - May 19, 2014 - Bridget G. Brennan, New York City’s Special Narcotics Prosecutor, James J. Hunt, Acting Special Agent in Charge of the U.S. Drug Enforcement Administration’s New York Division (DEA), New York City Police Commissioner William J. Bratton and Joseph A. D’Amico, Superintendent of the New York State Police, announced the arrests of two members of a multi-million dollar drug distribution network responsible for supplying massive amounts of heroin and other drugs throughout the Northeast. A six-month investigation resulted in the seizure of approximately 24 kilos of heroin (53 lbs.), over 9 kilos of cocaine (20 lbs.), three guns, including two assault rifles, and $85,000 cash.
On Thursday, May 15th, a team from the DEA’s New York Drug Enforcement Task Force Group T-42 – comprised of DEA special agents, New York City Police Department detectives and New York State Police investigators – conducted surveillance in the Bronx in the vicinity of 3873 Orloff Avenue, Apt. 7H, and 1874 Patterson Avenue as part of an ongoing investigation into heroin transportation and distribution organizations operating in the Northeast region.  Agents and officers observed Edualin Tapia and Guillermo Esteban Margarin entering 3873 Orloff Avenue, a suspected heroin mill location where the drug is processed and packaged, carrying suitcases and a white box.
The following day, Friday, May 16th, Group T-42 learned a Jeep Cherokee linked to the drug trafficking organization was traveling north on Interstate 95 towards Connecticut.  With assistance from the DEA’s New Haven District Office and the Hartford Resident Office, agents and officers learned that the Cherokee was driving in tandem with an Acura RDX and followed the vehicles to Hartford, Conn.
At approximately 1:45 p.m., the Cherokee and Acura RDX parked in the back lot of a residential apartment building. Margarin emerged from the Cherokee and joined Tapia, who got out of the Acura RDX.  Investigators observed Tapia remove a weighted white box from the Cherokee and walk toward the building.  As the two men were approaching the apartment, agents and officers conducted a “walk by” and observed brick shaped packages inside the white box, which they later determined contained nearly 10 kilos of heroin (22 lbs.).
Agents and officers entered the apartment and observed individuals at the sink, with the water running, preparing to dump white substance down the drain. Agents and officers secured the location and found another 13 kilos of heroin (nearly 29 lbs.) in an open closet in the back of the apartment.  Group T-42 conducted a search of the Infiniti that was associated with the apartment and seized $75,000, which was in plain view in the backseat.
Investigators believe the heroin was intended for distribution in Connecticut and points north, where the drug’s street value is at least double its street value in New York City.
The Special Narcotics Prosecutor’s Office obtained search warrants for 3873 Orloff Avenue, 7H and 1874 Patterson Avenue. Inside the Orloff Avenue apartment, agents recovered 3 kilograms of cocaine (nearly 7 lbs.) and a small amount of heroin.  A search of the Patterson Avenue location, a two-duplex house where Tapia resides, resulted in the seizure of a kilo of heroin (over 2 lbs.) and $10,000 cash.  The residence was equipped with surveillance cameras and featured a gated and locked driveway. A Honda Accord seized at the location contained 4 ½ kilos of cocaine (nearly 10 lbs.) that were recovered from the vehicle.
Early in the morning on Saturday, May 17th, based on surveillance and other intelligence, the Special Narcotics Prosecutor’s Office obtained a search warrant for a suspected stash location at 945 Zerega Avenue, Bronx, NY, Storage Unit #106H.  Inside the storage unit, agents and officers recovered two assault rifles, one loaded handgun, two kilos of cocaine (over 4 lbs.), approximately 200 pills of “molly” and multiple kilogram presses.
The Special Narcotics Prosecutor’s Office charged Tapia and Margarin with one count each of Criminal Possession of a Controlled Substance in the First Degree and Conspiracy. The two defendants are currently in custody in Hartford, Conn. pending extradition proceedings.
Special Narcotics Prosecutor Bridget G. Brennan said, “These arrests cut a pipeline moving huge amounts of heroin from New York City to the Northeast. Through cases like this one, we strive to cut off the supply of heroin at its source. Suppressing the availability of heroin, which is destroying an increasing number of lives, is a top priority.”
DEA Acting Special Agent in Charge James J. Hunt stated, “These seizures and arrests demonstrate that NYC is Ground Zero of heroin distribution networks supplying the Northeast, as well as being the prime market Mexican drug traffickers are using to earn profit from the sale of poison. Law enforcement has created a united front to find the heroin sources responsible for abetting the heroin threat facing our communities and this seizure reinforces law enforcement's efforts at all levels to combat the abuse of heroin and the devastating consequences that inevitably follow. ” Acting SAC Hunt would like to thank the DEA New England Division's Harford Resident Office and New Haven’s District Office for their assistance in this investigation.
New York City Police Commissioner William J. Bratton said, “Thanks to the hard work of the investigators and prosecutors involved in this case,  a massive drug operation trafficking millions of dollars’ worth of narcotics throughout the East Coast has come to an end."
New York State Police Superintendent Joseph A. D’Amico said, “Our partnership with the Drug Enforcement Administration, New York City Police Department and New York City Office of the Special Narcotics Prosecutor has once again led to the dismantling of a large drug distribution operation. With the arrests announced today a significant amount of drugs, heroin in particular, will not make it into our neighborhoods. We join our partners in law enforcement recognizing the toll this highly addictive and deadly drug has taken on our communities. We remain committed to doing everything we can to prevent the distribution of this and other dangerous drugs.”