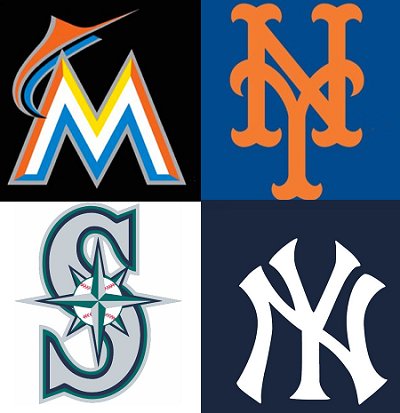 Following a 10-1 win over the Nationals and two straight rainouts, the Mets were prepared for a pitchers’ duel when Matt Harvey took the mound against Miami’s Jose Fernandez on Saturday. They got substantially more than they bargained for.

Juan Lagares hit an RBI double to drive in Ike Davis in the second inning, scoring first and giving the Mets a 1-0 lead. Harvey gave up a run on a sacrifice fly in the fourth to tie the game; those would be the only runs either pitcher would allow before leaving the game (Fernandez in the seventh and Harvey in the eighth), but they were hardly alone in keeping their opponents’ bats silent.

Neither team could muster another run in regulation, forcing the game into extra innings. The game reached the 13th inning, still tied at 1-1, before both teams decided to bring in a second starter—Shaun Marcum for the Mets and Kevin Slowey for the Marlins. Both men threw what would have been one of their better starts of the season had they entered thirteen innings earlier, pitching 7 scoreless innings before Marcum allowed an RBI single in the top of the 20th to give Miami a 2-1 lead. The Marlins brought in their closer for the bottom half and after 20 innings, 16 pitchers (8 were used by each team), and 6 hours and 25 minutes they finally defeated the Mets.

Any rest the Mets might have had from two days off was likely worn away from playing more than 2 full games worth of baseball in a single match, but they still came ready to play on Sunday afternoon. The Marlins scored first in the last game of the shortened series, knocking in an RBI single off Jon Niese in the top of the second. Daniel Murphy responded with a solo shot in the bottom of the inning to tie the game 1-1.

Wishing to avoid spending another 16 innings tied at 1, David Wright doubled in the third to drive home Niese and Lagares. Murphy followed with a groundout that allowed Omar Quintanilla to score and put the Mets up 4-1. That score held until the sixth when Miami knocked in two runs to bring the score to 4-3. A homerun in the top of the eighth tied the game at 4 and would force extra innings for the second straight day. There would not be another 11 extra innings of baseball, however; the Marlins racked up 4 runs in the tenth to take a commanding lead and put New York down 8-4.

The two-game sweep marks the third time Miami has beaten New York this season, and only the third series the Marlins have won period. Now 23-35 on the year, the Mets will take on the National League-leading Cardinals tomorrow at 7:10 PM.

The Yankees split the first two of a four-game set in Seattle last week. Robinson Cano got game three started on Saturday with an RBI single in the first inning to score Mark Teixeira and give the Yanks a lead that lasted a few innings. Andy Pettitte gave up a sac. fly in the fourth which tied the game, but Jayson Nix gave him all the run support he needed with an RBI single in the fifth to put New York back up, and another in the seventh to make it 3-1.

Pettitte went 7 1/3, allowing just the one run and only three hits before turning the ball over to David Robertson. Robertson did his job, setting Mariano Rivera up for his 22nd save of the year and keeping Pettitte’s 250th career victory intact.

Game 4 of the series was much tighter for most of the evening. After Brett Gardner singled to bring Nix home in the top of the second, David Phelps allowed a tying RBI single in the bottom of the inning. Phelps buckled down and did not allow another run as he pitched through the sixth inning. Boone Logan held down the seventh, and Robertson worked his magic in the eighth, but the game was still tied 1-1 entering the ninth.

Chris Stewart broke up the tie with an RBI single in the top of the ninth to drive in Ichiro Suzuki and give the Yanks a 2-1 lead. Rivera came on in the bottom half to pick up his 23rd save this year in what will presumably prove his last visit to the Mariners’ ballpark.

Now 1.5 games behind the Red Sox, the Yankees will travel to Oakland next. The series begins at 10:05 PM tomorrow night.