After many months of delays and frustration, a partial decision has been reached in the Miss Harper case. 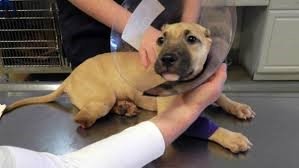 Mineola, NY - September 1, 2015 - After many months of delays and frustration, a partial decision has been reached in the Miss Harper case. The judge has ruled in favor of the prosecution. Statements made by Shawana Dearing Hughes and her husband Lee to investigators from the Attorney General's office can be used at the upcoming trial.

The hearing on evidence pertaining to Reginald Smith, who stands accused of performing the butchery on Miss Harper will conclude this Friday, September 4th and hopefully the judge will rule shortly after.

The Nassau County SPCA is eternally grateful to the advocacy members who continue to show their support in our quest for justice for Miss Harper.

The Nassau County SPCA will once again have advocacy members attend Nassau County Criminal Court Part 98 in Mineola Friday September 4th at 10:00 (see map  below). Please join us! Miss Harper was found last September with her back leg and both her ears cut off. Three people were arrested and charged with animal cruelty in connection with this case.

The Nassau County SPCA Court Advocacy members will be present  at all proceeding to convey a strong message to the defendant, the judge, and all other interested parties in the criminal justice system: this community cares about the outcome of these animal abuse cases.

We sincerely appreciate the court advocacy members who took the time to show their support for Miss Harper today.