Three Nassau County residents have been charged with animal cruelty in the case of Miss Harper, the abused pitbull pup. 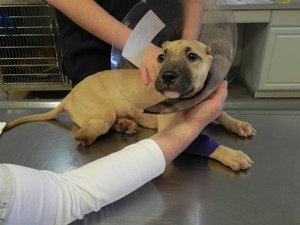 Today, the Nassau County SPCA and New York Attorney General Schneiderman announced that three Nassau County residents, including one veterinary technician, have been charged with animal cruelty after brutally removing the ears and leg of the pit bull pup Long Island has come to know as “Miss Harper”.

Just last week the NCSPCA announced that they were looking for information about Miss Harper, a dog that had been turned over to them in serious condition, and abused. At the time of their original release, they were also still looking for donations for her care and rehabilitation. Just days after the story broke, the Nassau County Police Benevolent Association pledged to cover up to $5,000 of Miss Harper’s veterinary bills, ensuring that she’d get the treatment she needed. At the same time, authorities were still hunting for her abusers, and that part of the saga came to an end on Tuesday morning.

On Tuesday morning, the lengthy investigation that spanned months was concluded, when Shawanna Hughes of Oyster Bay, Lee Hughes and Reginald Smith of Westbury, surrendered to authorities. The Hughes’ were Miss Harper’s owners, and Mr. Smith was a veterinary technician that “treated” the abused dog. They are charged with numerous counts of animal cruelty, conspiracy, and practicing veterinary medicine without a license.

According to an Newsday, an anonymous witness had taken Miss Harper, and turned her over to a local veterinarian after finding out that Shawanna Hughes no longer wanted to keep the dog, as she saw it as a liability, since she was on probation. Since then, Miss Harper has made an astounding recovery, and is up for adoption.