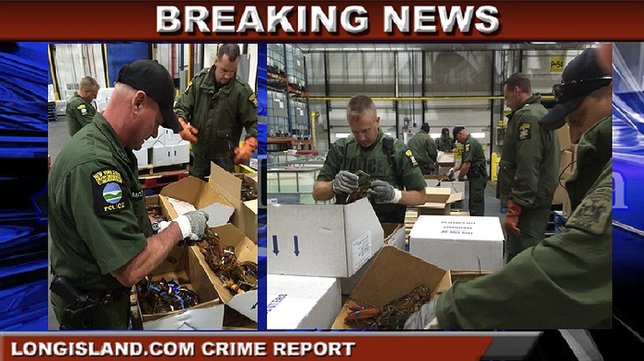 On the left: ECO with box filled with undersized lobsters. On the right: ECOs inspecting lobsters seized from Price Chopper.

The distribution center for Price Chopper is located in Schenectady, and Region 4 ECOs performed a routine inspection at the facility Tuesday, measuring 297 cases of lobsters. ECOs determined that 820 lobsters (approximately 15 percent of the inventory) were under the legal size limit set by the state's Environmental Conservation Law (ECL). At least 105 undersized lobsters have been seized at the other stores, with the total seizure valued at more than $7,000.

The law requires lobsters taken, possessed, bought, sold, imported and exported in New York measure between 3 and 3/8-inches and 5 and 1/4-inches from the eye socket to the end of the body shell.

Size restrictions have been placed on lobsters, a valuable natural resource, to protect the fishing stock. Over the last several decades, American lobsters have experienced periods of population declines due to overfishing, and allowing lobsters to grow and reach maturity bolsters the stock.

Price Chopper faces fines for violations of ECL provisions of the Fish and Wildlife Law of up to $100 for every shellfish involved. DEC will attempt to negotiate a settlement with Price Chopper in the coming weeks.

The undersized lobsters were seized and donated to the Regional Food Bank of Northeastern New York in Latham Wednesday.